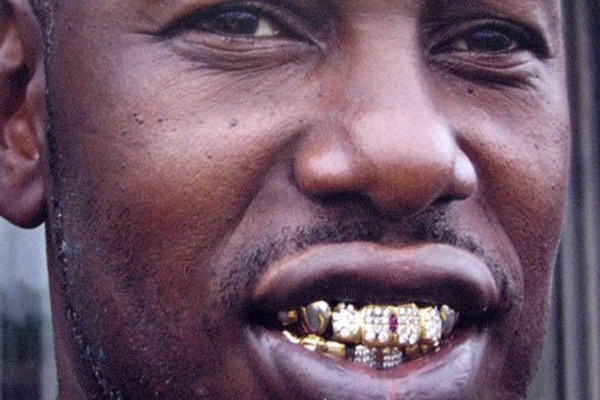 Have teeth become the last battleground on which war is being waged against impossible beauty standards?

We’ve come a long way since those sexist toothpaste ads from the 1950s. Or have we? While the blatant sexism might have gone, you’ll still see ads with impossibly unattainable beauty standards. Picture a model with chiselled movie star looks and a set of blindingly white teeth as symmetrical as a butterfly. Ah, that Colgate smile! The dominant image of perfect pearly whites hasn’t changed all that much in 70 years. Yet when you peer behind that façade you’ll observe a whole new beauty landscape. Dental make-up? Grillz? Tooth gems? Not to mention natural ‘flaws’ like tooth gaps now flaunted by models and actors the world over.

To put it simply, today straight and white isn’t necessarily held as the ultimate beauty ideal. So does that mean teeth are the last battleground on which war is being waged against impossible beauty standards? We’ll get to that. First, how did we get here? How have teeth evolved in pop culture?

Back in the 1960s, when a hip counter-culture emerged as the rebellious child of the 50s, a new breed of models and movie stars were emerging. They personified a new kind of beauty – less straight, more free and natural, mirroring the spirit of the hippie movement – and they brought their gapped teeth with them. Step forward, Jane Birkin, Lauren Hutton, and Brigitte Bardot, who along with many others proudly bore their gapped teeth in movies and on catwalks. Where once the tooth gap – known as ‘midline diastema’ by dentists – was seen as a flaw, it was now something to celebrate, something that challenged fixed ideas about what beautiful teeth could be.

During that same decade, in the US, gold teeth were also reportedly becoming a fashion statement. This was down in Miami, but contrary to what Scarface fans might believe, it had nothing to do with gangsters or tough guys showing how much dough they raked in. The idea that glinting gold gnashers and social status were synonymous in the public consciousness would take hold in 1980s New York, when they set the hip-hop world ablaze along with the birth of the grill.

The key guy in the birth of the grill? That’ll be NYC jeweller Eddie Plein. He’s the self-proclaimed Godfather of the Grill and proud owner of the Twitter handle @IAMEDDIEGRILLZ. In the mid-80s, Plein made gold caps for Flavor Flav, cementing the NY rapper’s iconic look (the giant clock chain) with a dazzling gold ear-to-ear smile. The trend soon skyrocketed as Plein made grills for the likes of Kool G Rap and Big Daddy Kane. Plein then moved to Atlanta to open Eddie’s Famous Gold Teeth, a custom gold grills store, where he later bejewelled the teeth of OutKast, Ludacris and many more.

The evolution of this beauty trend has led to a whole smorgasbord of types and colours in recent decades. Let’s break some down. There’s the vamp grill, as seen on the reverse cover of Method Man’s 1994 Tical album; there’s the ultra-pointy gnashers of Riff Raff; there’s Lil Wayne’s diamond-encrusted grill; there’s even Pharrell’s multi-coloured rainbow grill featuring white diamonds.

You could say this dental trend went mainstream with the 2005 Nelly hit Grillz, the music video for which shows the rapper surrounded by dudes and models, all parading their grills, while Nelly sings: “Smile for me daddy / Let me see ya grill.” Realistically, though, it wasn’t until 2013 when the grill spilled out of rap circles. That year, Madonna paraded a gold-plated grill, while Miley Cyrus had a subtle silver one on her lower teeth, and Rihanna sported a gold cross grill to the VMA’s. Throw in Beyonce, Bieber and Katy Perry and suddenly your parents are asking you what this fancy retainer is all about. (FYI: Perry’s $1m dollar grill – encrusted with purple gemstones and diamonds and seen in the music video for Dark Horse  – was deemed the most valuable ever by the Guinness Book of World Records.)

The grills business is officially booming. As the industry has thrived, designers have broadened the looks on offer. Juanita Grillz, a custom grills jeweller at the forefront of this movement, can hook you up with anything from neon urchin-style frames to bizarre wire contraptions that are basically a work of art in your mouth. Then there’s the cult LA salon GBY – aka Go Blush Yourself – that can sort you out with 24-carat gold tooth gems. Their gems range from gold charms, Swarovski crystals, to bonafide diamonds. They’re the go-to for gold teeth in LA and count Kylie Jenner, Princess Gollum, and Wolftyla among their loyal customers.

Which leads me to tooth gems. These tiny jewels have also taken off in recent years, emerging as a throwback to the small silver, gold and crystal gems people had bonded to their teeth in the 90s. Adwoa Aboah wore a diamond Chanel logo on her front left tooth at last year’s BRIT awards; Katy Perry showed off her golden Nike symbol on a single tooth in 2015; and Drake revealed his pink diamond gem last year. It’s another rising beauty trend that has again fed a burgeoning industry, with new jewellers like LA’s Tooth Kandy specializing in celebrity teeth bling.

One of the more eye-catching beauty trends recently is make-up for your teeth. Yep, it’s taking Instagram by storm. Temporary teeth polish enables you to swap your pearly whites for a kaleidoscopic explosion of colour. The New York-based cosmetic company CHRŌM provides a line of 10 colours, which you can mix and match, depending on whether you want just your canines in red, all the bottom teeth blue, or a whole rainbow if you really want to turn heads. Thankfully it’s smudge-proof and lasts 24 hours, meaning it won’t rub off when you chow down on your Pret lunch.

Dental make-up underlines the idea that teeth are basically just another part of your body’s canvas. With that in mind, make-up artist Isamaya Ffrench showed a more experimental approach to dental beauty when she created a series of teeth moldings for the A.Human exhibition by Simon Huck in New York. In the show, which examined the future of fashion and body modification, Ffrench’s imaginative moldings appeared like something out of a sci-fi movie, with otherworldly blue patterns popping out on white moldings.

You can see a similarly playful approach when she worked on a shoot for Dazed Beauty with photographer Daniel Sannwald and enigmatic producer Yves Tumor. In the shoot, which is based on ritualistic practices and mixing old and new forms of body modification, Tumor pulls his lips back to reveal his modified blue and white floral-designed teeth. It’s playful, performative and shows how teeth can be art.

Elsewhere in pop culture – Hollywood, specifically – fake teeth grabbed headlines this year. Meryl Streep reportedly asked for custom prosthetics for her role as Alexander Skarsgård’s mother in Big Little Lies. Why? Because she thought she’d appear more authentic and believable. Then there’s Rami Malek whose fake teeth in Bohemian Rhapsody, he says, helped his performance as Freddie Mercury. Sure, actors have used false teeth for years, whether it’s for laughs like Mike Myers in Austin Powers, or screams like Christopher Lee in Dracula. But now, used more subtly in Oscar-bait dramas, fake teeth are the new performance-enhancing tool in every serious actor’s toolbox.

So, where are teeth in pop culture headed? The tooth gap is still a mainstay of the beauty landscape, with Léa Seydoux lighting up screens and following in the footsteps of 90s French pop sensation Vanessa Paradis. Gucci Beauty, more recently, launched its first lipstick campaign with gap-toothed rocker Dani Miller. (On a side note: it’s worth mentioning the flipside to this new dental diversity: that it can, in turn, create an unnatural beauty standard, as we saw with the extreme example of Tyra Banks reportedly recommending a Top Model have a gap surgically widened to resemble Lauren Hutton.)

Grills, too, have stuck around since Nelly’s 2005 bling anthem, proving they’re more than a passing trend. That said, the trend hasn’t truly trickled down from red carpets to the streets. Ask yourself this: Could you afford a sparkling diamond-encrusted grill? That’ll be why you don’t see too many. Likewise, installing tooth gems can cost hundreds, if not thousands, of pounds, unless you opt for a cheap kit and take the risk of fixing the gems on yourself.

In all likelihood, it’s hard to picture either dental make-up or jewellery becoming as ubiquitous as tattoos. For some people the paranoia that these tiny jewels and marks could be mistaken for broccoli or sweet corn is enough to steer them clear. For others, that unattainably symmetrical Colgate smile – all uniformly white as a sheet of A4 – is so ingrained that opting for bright green tooth polish could only be seen as a statement or gimmick to grab eyeballs.

Today, teeth feel like the final frontier for challenging impossible beauty standards. Whether it’s about presenting a positive body image to the world, to feel comfortable with your own natural, unique teeth, or whether it’s about just having fun, bulldozing traditional notions of beauty, and playing with colour and bling – there’s no one way of seeing teeth. No single standard. And anyway: who wants to live in a world where everyone has the same straight white teeth?

When you brush your teeth tonight let the realisation sink in: that these are not mere teeth, mere gnashers with which to break up your food into manageable pieces before swallowing. No. Your teeth are another canvas to play with. Another place where, if you choose to, you can express yourself and say to the world, This is what I’m about, these are my teeth – with a smile they’ll never forget.

What A Person Do In Case The Car Eliminate?

Top Five Tips For Designing Marketing Strategies Which Get Results

Yolke switches to a direct-to-consumer model

6 Great Suggestions For Using Notes For A Speech

Tips For Learning To Drive