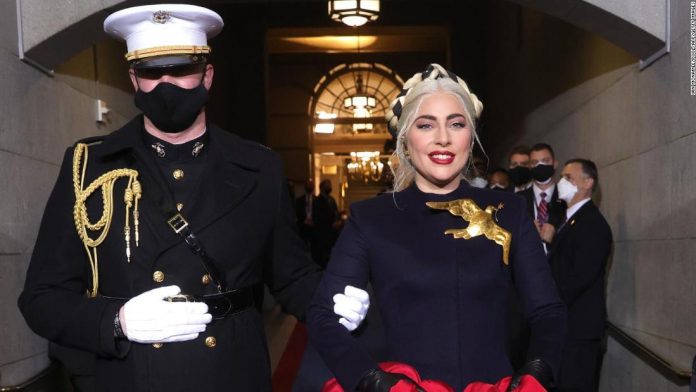 For those who need convincing that fashion is a form of art, Daniel Roseberry’s designs for Maison Schiaparelli offer a persuasive argument.

Take, for example, one look from his most recent haute couture collection: from a wool crepe dress extend two fabric “gazelle horns” embroidered with gold lamé thread, gold pearls, gold cut beads, handmade gold pom-poms, Swarovski crystals and rhinestones. Above the horns is a matching headpiece, and below, a pair of nipple buttons in gilded brass.

This is not cookie-cutter fashion, as Roseberry calls it. This is something far more extraordinary.

Dresses are voluminous, shoulders are exaggerated, materials are lush and the detailing demands a closer look (signature jewelry items, the “bijou” as they’re known, come shaped like eyeballs, noses, hands and lips). The creations are all the more beautiful for their Surrealist references and an almost perverse edge.

At first glance, it’s hard to imagine these designs coming from an understated, born-and-raised Texan — one who says, without a hint of irony, that he’d happily live in a cabin in Maine for most of the year and design clothes from there.

“My life. my personality and my emotional reality is in direct opposition to the work that I want to put out there,” he says during an interview in his Parisian atelier, on Place Vendôme, days before his new collection is unveiled.

When the then-33-year-old Roseberry, from Plano, Texas, was appointed artistic director of Schiaparelli, he became the first — and to date, only — American to lead a French couture house. He was hardly a household name at the time. Trained at New York’s Fashion School of Technology, and with 10 years at Thom Browne under his belt, he had the credentials, certainly, but no experience at the helm of a luxury fashion house, no formal training in haute couture and no spoken French.

He also had the looming legacy of the house’s founder, Elsa Schiaparelli, to grapple with. A true renegade, she was perhaps the most important and influential designer between the two world wars, a title challenged only by Coco Chanel, her arch rival.

Born into an aristocratic Italian family, Schiaparelli rebelled from an early age by publishing a book of sexually-charged poetry titled “Arethusa,” the name of a nymph from Greek mythology. She was sent away to a Swiss convent but left shortly after going on hunger strike. Married and divorced by the early 1920s, she moved to Paris with her daughter where she lived a bohemian lifestyle and acquired a circle of artist friends. In 1927, Schiaparelli launched a fashion business out of her apartment, quickly expanding it and becoming more prolific and inventive.

Ten years later, drawing on her relationship with Spanish artist Salvador Dalí, Schiaparelli created one of the most famous gowns in fashion history: the lobster dress. At the height of the Surrealist movement, the silk organza dress with a large lobster sketched onto the skirt was a symbol of the times — and remarkably avant-garde.

But Schiaparelli’s progressive designs didn’t keep her out of the mainstream. In 1934, she became the first female fashion designer to feature on the cover of Time magazine, and later on she was even a special guest on the popular US game show, “What’s My Line?”

After decades of success, Schiaparelli shuttered her business in 1954; it lay dormant until being revived by businessman Diego Della Valle in 2012.

So when Roseberry walked into the atelier some two months before he was due to present his first collection for the brand in 2019, he must have felt intimidated? “Ignorance is bliss,” he says. “When I started, I had 63 days for the first collection and I honestly did not have time for anxiety. I didn’t have time for a nervous breakdown. It was so intense.”

Despite his baptism of fire, and two first years defined by the Covid-19 pandemic, the designer seems quietly confident. “You know it’s funny,” he says, “I could lose sleep about going to a dinner party that I feel intimidated to go to, but I’m not really losing sleep about my work. I feel really comfortable with what I do.

“Being an American gives me a sense of perspective,” he adds, “maybe even more of a sense of freedom.”

Roseberry has clearly spent time getting to know the house and the legacy of its founder. He’s well versed in Schiaparelli’s life, her contributions to the industry and her archive. He’s respectful of the history but is also focused on building his own creative language — the new “codes,” as he calls them.

“I think people have this notion of couture, that it exists inside of a glass box,” he says, in reference to the exclusive nature of high fashion. “And a lot of what I’ve tried to do over the past two years is shatter those glass walls and really expose the process.”

Roseberry is a hands-on designer. From the early sketches to the final campaign shoot, he’s present throughout the process, working intensely alongside his team. “You hear stories of designers who don’t come in, or they come into the studio once a month. I just can’t imagine that,” he says.

During his debut runway show, Roseberry even planted himself on the catwalk. As the lights came up, the designer appeared sitting at his drawing table (a nod to his old studio in New York’s Chinatown, where he sketched his first designs for the label). Models breezed past Roseberry, bringing his drawings to life while he continued to sketch live on stage.

According to the designer, sketching is one of his secret powers. All collections begin with images made by Roseberry — he’s been drawing since he was a child, taught by his mother from an early age, and it’s become “the bedrock” of his creative process, he says.

When Roseberry got a call, some 10 days before the US presidential inauguration, asking him to design a look for Lady Gaga’s performance of the national anthem, he began sketching almost immediately. He made 12 drawings for the singer’s outfit that day.

The final look, a large red silk dress with fitted navy jacket and an oversized dove-shaped brooch, came together in a matter of days. “It’s one of those moments that you don’t really know the impact that it’s going to have on your career, and also on the house, until much later,” he reflects, calling it “an honor of a lifetime.”

The dress was originally supposed to be all white, but after seeing the initial designs, it was Gaga herself who suggested the red and the blue — and it was “so much stronger,” Roseberry says.

Almost immediately after the Grammys, in March, Roseberry started work on this season’s couture garments. He spent 10 days in quarantine in his Paris apartment after coming back from the US, and he drew every day, creating hundreds of drawings and “working things out in mind,” he says.

What emerged from the early sketches is “The Matador,” his fourth collection comprising 26 different looks. In his show notes he writes that it is a “collection that honors Elsa’s vision but isn’t in thrall to it.”

While last year he was designing for the end of the world, as he puts it, this year he’s designing with joy in mind, reflecting on all the reasons that drove him to fashion originally.

“The world didn’t end,” he writes. “We’re still here. Fashion is still here. Couture is still here. And not only is it still here, but in a world increasingly reliant on the easily replicable and the digitally disseminated, its power — to stop you in your tracks — is greater than ever.”

Last season, jewelry took center stage (he says this was a direct response to the pandemic, with striking accessories designed to grab people looking at his clothing on screens), this season was about embroidery. One look in particular — a mini dress with “monstrous” barrel sleeves embroidered in pink silk taffeta flowers — is, Roseberry believes, one of the more literal examples of how he applied his new codes to the iconic Elsa Schiaparelli archive. The dress is a tribute to a jacket she made in collaboration with French poet and artist Jean Cocteau in 1937.

The original piece features a sketch of a vase with pink flowers spilling out of it. “It’s repurposed and repackaged in a way that feels definitely an homage,” Roseberry offers, but it’s a look that he says is in “full control of the language of today.”

What the full video above or here.