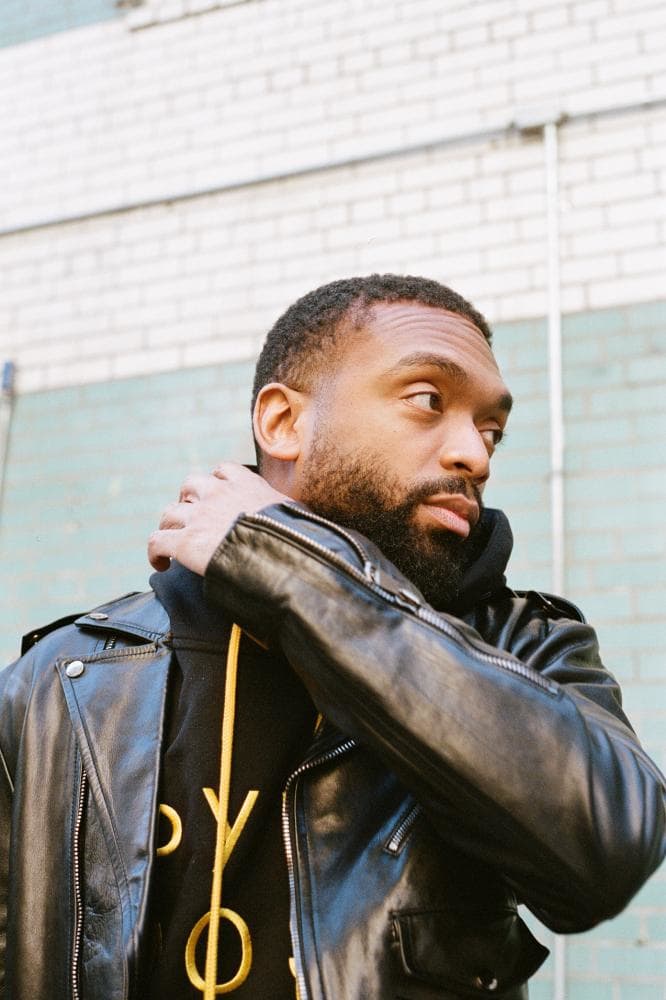 In 2015, Pyer Moss founder Kerby Jean-Raymond made a decision that almost destroyed his fledgling fashion label. In the wake of the death of two black men, Eric Garner and Michael Brown, at the hands of American law enforcement officers, thousands were marching on New York to protest against police racism and brutality. Jean-Raymond, who founded his brand in 2013 after stints working with Kay Unger and Marchesa, felt compelled to respond. So, with next to zero budget, he produced a short film addressing the ongoing crisis and screened it before his spring/summer 2016 show at New York Fashion Week.

Washington Post critic Robin Givhan, who appeared as an interview subject in the film, wrote an article about the project, propelling the little-known Pyer Moss (pronounced Pierre Moss) into the spotlight.

But the immediate, material impact on Jean-Raymond’s label was far from positive. His show venue pulled out. A European stockist dropped his line. And that was only the beginning.

“Within 36 hours, six of my biggest accounts dropped me,” he remembers. “The remaining ones were sub-$20,000 season accounts – not enough to keep our lights on. So I’m at this point where I’m about to lose my company, I’ve pissed off investors and I’m getting death threats from white supremacist groups.”

Race on the runway
The 12-minute film was built from a series of interviews with prominent black Americans, including Usher and the artist Kehinde Wiley, addressing the issue of racism in policing. It also featured conversations with family members of black men who had been killed by police officers, including Garner’s daughter, Emerald.

The clothes, his first foray into womenswear, were deafeningly quiet – casual tailoring, biker jackets, crisp fencing shirts, kimono-style coats and tracksuits in black, white, olive and grey; spray-painted live by the graffiti artist Gregory Siff and treated with a simulated blood-spatter effect, as though not to distract from what had preceded it.

Until this point, Jean-Raymond had largely refrained from political statements because he was “scared of the space”, ie, the fashion industry. “It was very Anglo, elitist, prejudiced,” he explains when Vogue meets him in his compact but meticulously organised studio in midtown Manhattan. “I didn’t feel like there was a place for me in fashion, so I never spoke up.”

Now Jean-Raymond was speaking up, and he was being admonished for it. “I was the first martyr in fashion because I talked about race,” he says.

On top of these struggles, he also became embroiled in a protracted legal battle. In early 2016, his investors wanted to pull out of the business and served Jean-Raymond with a lawsuit that accused him of a litany of transgressions including trademark infringement and unfair competition. Under the shadow of these new legal proceedings, which dragged on into 2017, Jean-Raymond became depressed. He had panic and anxiety attacks. Worst of all, he now had to deal with all of this in public. “People were recognising me now on the train – I was broke and famous, and it was really scary.”

Just when Jean-Raymond was about to walk away from it all, he received a call from Erykah Badu – a fan of the label – encouraging him to persevere. “Kerby is putting an important message out there,” the multi Grammy Award-winning artist told Vogue via a telephone call. “It doesn’t matter whether his clothes make you feel happy, angry, guilty or sad – whether you agree with what he’s saying or not – he is creating a movement beyond the world of fashion.”

Fashion as a platform
Staged in February 2016, the collection addressed the weighty theme of mental health. Garments were printed with darkly satirical statements and emotive quotes like, “You don’t have any friends in LA” and “My demons won today I’m sorry”. The latter was the final Facebook post of Black Lives Matter activist MarShawn McCarrel, who’d committed suicide less than 10 days before.

Social commentary on the catwalk became Jean-Raymond’s signature. His spring/summer 2017 show made a touchpoint of money, linking white-collar criminals like Bernie Madoff to his own legal drama. Autumn/winter ’18/’19 took inspiration from 19th-century African-American cowboys, and for his spring/summer 2019 show last September Jean-Raymond enlisted artist Derrick Adams to create 10 new works to be incorporated into the designs, presented entirely on men and women of colour. The show opened with a couture-quality dress, embellished with thousands of tiny caviar beads which came together to depict a black man tenderly cradling a baby.

“[The collection] focuses on the black family. What does it mean to be black? What does black normalcy look like? What does black mundane life look like?” he explains. “When black people are spoken about in the media it’s always in a really sensationalised way. Either you’re really extraordinary or you’re really bad and terrible – either way, you’re a statistic. I wanted to fill in the blanks.”

The show was warmly received and widely regarded as one of the highlights of New York Fashion Week. American Vogue fashion director Virginia Smith called it the “most memorable, goosebumps-inducing moment of the season”, while The Cut’s Cathy Horyn wrote that “Jean-Raymond’s gift is for responding to things right in front of him, and then making simple, wearable clothes with a spark of wit.”

Two months later, Jean-Raymond won the CFDA/Vogue Fashion Fund for emerging American design talent. CFDA CEO Steven Kolb tells Vogue that Pyer Moss stood out for the clarity of its vision and Jean-Raymond’s consistency in conveying a strong message. The label received recognition in the form of celebrity fans, too. Michelle Obama wore a suit from his autumn/winter ’18/’19 collection in an appearance on The Tonight Show Starring Jimmy Fallon. From a critical perspective, Pyer Moss had reached new heights.

But critical acclaim does not necessarily equal commercial stability. As recently as the autumn/winter ’17/’18 collection, Pyer Moss was still facing closure, so its founder sought a solution in the form of a corporate patron, striking an agreement with Reebok that offered Jean-Raymond a multi-year deal with complete creative control.

The new social consciousness
Jean-Raymond’s experience in the wake of his spring/summer 2016 show is a case study in the dangers a small business faces when it becomes explicitly politically engaged. For a young, upscale fashion brand that drives neither high production nor sales volumes, margins are thin at the best of times. Any unexpected challenges can be cataclysmic. For Pyer Moss, they nearly meant closure.

The political climate has changed significantly, though, in the years since Jean-Raymond’s pivotal spring/summer 2016 show. Brands are aligning more closely with their customers’ social and political views – often with financial benefits. Nike’s campaign with athlete and activist Colin Kaepernick added US$6 billion to its market cap. Reebok’s decision to embrace Pyer Moss as a collaborator also speaks to this shift.

The Reebok money has enabled the designer to buy out his former partners and pay off his debts. And with US$400,000 in prize money from the CFDA/Vogue Fashion Fund, Jean-Raymond is now focussed on building a sustainable business and will skip New York Fashion Week this February.

“I’ve got to be realistic – our cachet is still growing, there’s a lot of people who know the brand now, but how many of them are true customers?” he says. “If I’m going to expand the business, it has to be because the demand has exceeded the supply – it’s not there yet.”