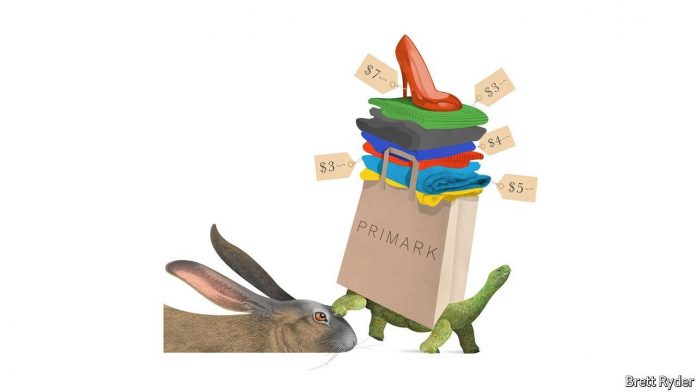 SET OUT for a shopping trip with $100 and you can snap up a pair of Levi’s jeans or half an Hermès necktie. Or you could pop into Primark and fill a wardrobe. The discount purveyor of fast fashion, which is expanding in America from its base in Europe, will flog you a T-shirt for $3.50 and trousers for a tenner. Such prices seem too good to be true to campaigners, who assume they can only be the result of corner-cutting in a sector rife with dodgy labour practices. Rivals such as Zara of Spain and H&M of Sweden, which used to be considered cheap before Primark came along, already run tight ships and squeeze suppliers hard. What is Primark doing so differently that it can sell wares for less and still make money?

A lot, it turns out. Though Primark looks as if it is in the same trade as its budget rivals, beneath the seams its business model could not be more different. On strategic decisions the firm has zigged when much of the apparel industry has zagged. As other firms try new approaches, such as rejigging their business for the internet age, Primark has doggedly stuck to a stack-it-high-sell-it-cheap approach to retailing that would feel familiar to the manager of its first store, opened in Ireland in 1969. The strategy has limitations, particularly when it comes to new growth. But for now—and notwithstanding the odd pandemic—it is proving its worth.

The giants of fast fashion have grown by embracing speed. Starting in the 2000s Inditex, which owns Zara, made a name for itself by raising the metabolism of the apparel sector. Previously shoppers had to wait entire seasons for high-street brands to replicate the catwalk’s new looks. It took at least that long to get fresh frocks made and shipped from distant Asian factories with long lead times. Zara stole a march on the industry by manufacturing some of its collection in Europe, allowing it to get designs in shops in just a few weeks. Like a hot pair of heels, the business model was soon aped across the industry. When impatient consumers moved online, Zara, H&M and others hurriedly followed them there—never mind the iffy economics of home delivery.

Primark, which is part of Associated British Foods, a conglomerate worth £16bn ($22bn) that also sells bread and Twinings tea, has stayed in the slower lane. Its bet is, broadly, that shoppers will accept being a little less cutting-edge in return for big savings. Designs are simple to keep stitching costs down. Where fancier rivals boast that every shop has a unique assortment of regularly updated goods, Primark orders millions of the same frocks months before they arrive on the shelves. That is a lifetime in the age of Instagram influencers. But it lets Primark charge frock-bottom prices.

This strategy allows it to concentrate manufacturing in lower-cost countries, notably Bangladesh, where monthly wages in the garment sector start at around $100. These are often the same factories used by other global retailers, which ought to blunt criticism that Primark is an outlier when it comes to labour practices. The firm does sensible things like limit subcontracting and conducts lots of audits to ensure working conditions are adequate. And its slower approach means orders can be placed in fashion’s off-peak periods, when factories are grateful for the work. Manufacturers know they can keep staff busy stitching Primark dresses during lean weeks, while slotting in more lucrative short-turnaround runs for less patient brands. Clothes are shipped to end markets by the slow boat.

The cost savings are passed on to consumers, with some left over for shareholders. Before the pandemic jumbled up everyone’s books Primark reported a gross margin—sales minus the cost of stuff sold—of 41%. That is well short of Inditex’s 57% or H&M’s 53%. But Primark’s parsimonious nature extends to operating expenses. It has relentlessly squeezed the costs of marketing and selling goods. Factor this in and it ends up with an “EBIT” margin of around 12%—in line with the industry standard.

Some of this is down to common-or-garden penny-pinching. While H&M spends 4% of total sales on marketing, Primark runs almost no ads. In an industry that often discounts, which crimps margins, Primark assumes its prices are already low enough. Outside Britain its outlets are enormous—on average, nearly six times the size of those run by Inditex—and often in out-of-town malls where rents are cheap. The jumble-emporium vibe they exude works: Primark sells about ten times as many items as H&M per square metre of shop, according to Aneesha Sherman of Bernstein, a broker. On a recent visit, a young shopper in front of Schumpeter in the queue to the fitting rooms took in 14 items.

Where Primark has strayed furthest from the fashion pack is in its refusal to sell anything online, which it sees as unfeasible at its price points. That has kept margins plump as the company avoided a wodge of spending on developing apps and fulfilment capabilities. The lack of an online presence meant that Primark lost up to 100% of sales as the pandemic shut shops around the world. Extended closures, especially in Britain, home to about half of its 380 outlets, cost it £3bn in sales and perhaps £1bn in profit.

Hare-brained or smart as a tortoise?

Primark’s cost-slashing strategy is so multifaceted as to be virtually impossible for rivals to replicate, argues Ms Sherman. Still, its idiosyncrasies hit limits of their own. The pace of expansion of shops, which is limited to Europe and America, feels glacial to investors—but go any faster and the model’s delicate economics may stop working. Critics wonder about the environmental sustainability of $1 knickers. And new online rivals look menacing, particularly Shein, a fast-growing Chinese super-discounter.

Yet the queues outside Primark shops as they reopened after shutdowns suggest that some punters cannot wait to splurge in person. Sales are now higher than before the pandemic, helped by the covid-linked disappearance of some once-fearsome rivals, such as Topshop in Britain. In the world of fast fashion, slow, steady and cheap can be a winning strategy. ■

For more expert analysis of the biggest stories in economics, business and markets, sign up to Money Talks, our weekly newsletter.