Home Catwalk I waited four and a half hours to interview Naomi Campbell –... 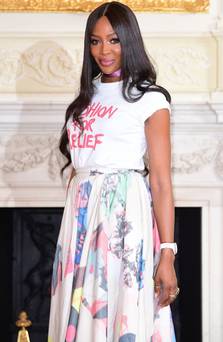 It will probably come as no surprise, but meeting Naomi Campbell is no easy task. Before securing just a few minutes with the legend herself, I’m walked through scores of rooms, up and down various flights of stairs, on the way meeting about 20 impossibly chic people who are in some way linked to the fashion legend.

Then, it’s four and a half hours of waiting in stuffy rooms – at the Ritz, of course, because where else would you meet a supermodel?

I’m obviously not the only person who thinks Campbell is worth waiting for – the five-star hotel is packed with fashion’s It-crowd waiting for the big announcement that she’s this year’s recipient of the Fashion Icon Award at the prestigious Fashion Awards 2019 in December.

Of this achievement, Campbell is effusive. “It’s a special honour because it’s from your country, your birthplace, it’s from the people in my business that have voted to give this to me, so it means so much,” she says.

Giving Campbell this accolade isn’t exactly a big shock – take a look at her resume and you’ll see that few people have had quite the impact on the fashion industry as Campbell has.

She’s consistently been a trailblazer for women of colour in an historically white industry – she was, after all, part of the golden age of ‘supers’ and was the first black model to grace the cover of French Vogue in 1988.

In her early years, Campbell did have somewhat of a reputation for her temper, as well as her talent. She acknowledges this in her speech, saying demurely: “When I did go through my up and downs, you all would forgive me and embrace me.”

Now 49 years old, she’s entered a new phase, building up a new reputation for herself – one as an activist, fighting for racial equality in the industry.

While Campbell still models and takes to the catwalk for big labels like Dior, her time is also filled with philanthropy and social justice.

When her old friend Edward Enninful became the new editor of British Vogue, she was quick to criticise the lack of diversity in the company.

This isn’t out of character for her – considering the uphill battle Campbell has faced in the industry because of her race, she constantly speaks out about inequality and the need for fashion to do better.

Unfortunately, she really doesn’t seem as keen to talk about these hot-button issues in person as she is on social media. When asked about diversity in the industry, she says relatively mildly: “I see progress, yes, as always there’s more progress to be had.”

What she will be direct about is Enninful’s contribution. “What he’s done in his year has been exceptional, and I’m not being biased,” she says with a giggle that I can only describe as being truly delightful.

It almost makes the four and a half hours melt away (almost, but not quite).

Unfortunately, even when asked about highlights from her career, Campbell really didn’t give me much more.

“I’ve had so many wonderful moments,” she says, and it’s only when pressed that she adds: “I think the ones when I was with my group of women – those are special moments and defining moments to me.”

She is, of course, referring to the iconic golden age of supermodels in the Nineties, where she ruled fashion along with Christy Turlington, Linda Evangelista, Cindy Crawford, Claudia Schiffer and Kate Moss.

Campbell is undoubtedly a delight, but waiting this long to speak to her isn’t exactly out of character.

She’s become known for somewhat diva-ish behaviour, which often manifests itself in a more fun way – such as when she enlisted someone to fan her as her own personal wind machine, when walking the Met Gala red carpet.

Not only has Campbell transformed British fashion, but she’s now on a mission to elevate African fashion and bring it to the world stage.

When asked about this – what she’s most excited about and what particular names we should be looking out for – once again I get a perfectly nice but vague answer.

She wants everyone to “embrace the great continent of Africa once and for all” – so I’ll probably have to look to her Instagram feed for a few more details.

Campbell is an icon and a giant in the industry, so there’s no doubting she deserves this award.

I only wish her words were as powerful in person as she is on the catwalk.