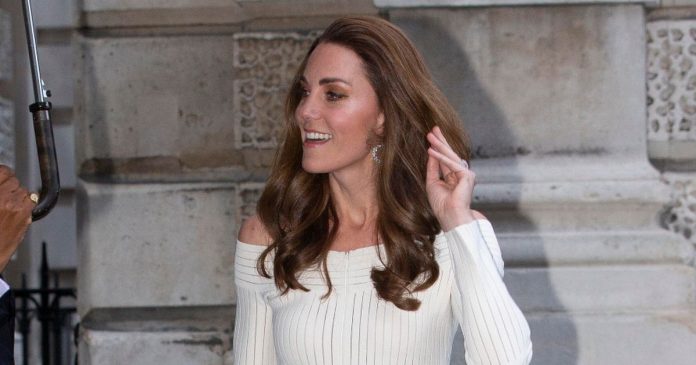 The Duchess of Cambridge brought glitz and glamour to a charity dinner as she arrived in a stunning white dress and sparkly heels .

She recycled her Barbara Casasola dress for the first annual gala dinner in recognition of Addiction Awareness Week, which was hosted by Action on Addiction.

While most people loved her look, some fans thought she had made a rather awkward fashion error with the off the shoulder dress.

Many believed she was actually wearing the £1,580 frock, which she bought in 2016, backwards. Oops!

Pictures from the glamorous event show the dress has a zip down the front and many said it should have been at the back.

But it turns out the Duchess was absolutely right and the zip is supposed to be at the front.

She wore it the same way back in 2016, and photos of the dress on the catwalk show that’s how it’s designed to be worn.

It’s not the first time Kate has been accused of wearing clothes backwards, but on the last occasion she was actually wearing the shirt wrong .

In March she stepped out in an eye-catching £790 Gucci blouse with ribbon tied into a bow on the front.

According to the website the buttons were meant to be at the back, but she wore them down the front.

It’s unknown whether it was intentional or an awkward error, but the shirt almost sold out regardless thanks to the ‘Kate effect’.

The duchess has been patron for Action on Addiction, which offers life-saving treatment to both individuals and their families, since 2012 and it was one of the first causes she put her name to after becoming a royal.

Speaking at the dinner, Kate said: “Sadly, for many who are suffering with addiction, they just don’t receive the help they need early enough.

“Action on Addiction was one of my very first patronages, and as such, it is very close to my heart.

“I’m hugely passionate about the support it provides, especially for parents, children and families who suffer from, or through, addiction. And in some ways, it was the catalyst for my interest in early childhood development.”

The royal said the root causes of drug and alcohol addiction could often be traced back to the very earliest years, as she called for help to break the inter-generational cycle.