Home Catwalk Michael Burke: why China is the future for Louis Vuitton 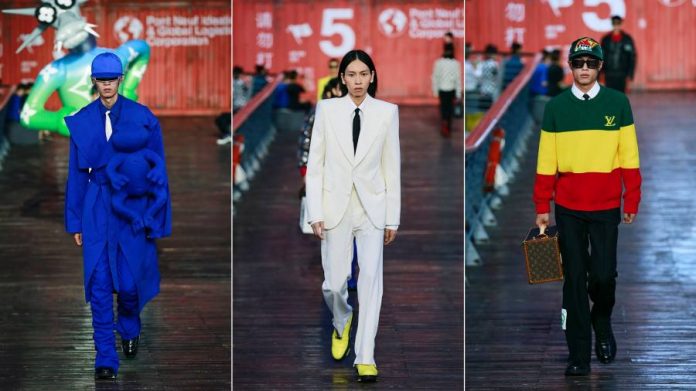 In October, on a 260-acre ranch turned Louis Vuitton factory in north-east Texas, Bernard Arnault, the owner of LVMH and the world’s fifth-richest man, stood on a podium in front of US president Donald Trump and his daughter Ivanka and praised the strength of the US consumer. “The American market is number one for LVMH in the world, representing around 25 per cent of our business, a little more than $10bn a year,” he said.

It might not be number one for much longer.

“Ultimately, most of our business is going to be in China. The question is how fast,” says Michael Burke, chief executive of Louis Vuitton, LVMH’s largest brand. He is technically on holiday when we speak, ensconced in a scarlet sofa in a casual blue shirt. “Within five years it will happen. Because of Covid, it’s happening much faster.”

The Covid-19 pandemic has battered the €281bn luxury goods sector, which is expected to shrink by 25 to 30 per cent this year and might not return to 2019 levels until 2022 or 2023, according to Bain. It has hit consumer confidence and dragged several prominent US department stores into bankruptcy.

LVMH has not been immune. Its profits tumbled 68 per cent in the first half of the year, worse than analysts had expected, though it noted “strong signs of an upturn in activity since June”, led by markets such as China and Japan, where outbreaks have waned.

That may explain why Burke appears nonplussed when asked about the fallout of Covid-19. “I’m on my seventh recession — or at least I think we will be by the end of year,” says the executive, who began working with the Arnault family 42 years ago, reviving the formerly sluggish Fendi and Bulgari brands before taking the helm at Louis Vuitton in 2012. “Every single time it was the biggest, the worst, Armageddon, nothing will be the same again. I don’t believe in that.”

Burke’s confidence has been bolstered by the performance of Louis Vuitton’s latest menswear show, which skipped out on the digital men’s Paris Fashion Week to make its debut on a real, live catwalk on the docks of Shanghai. Abloh’s collection of primary-colour suits, boxy single-breasted coats and chequered knits, some pinned with cartoon creatures, were seen by 1,500 people in person and another 104m online — roughly 2 per cent of the global online population and five times that of Louis Vuitton’s previous men’s show.

“When done properly, that’s what a live show does — it takes risks and does things that are new,” says Burke, who believes that digital should “augment” fashion shows, not replace them.

The numbers were largely thanks to a surprise catwalk appearance by actor and singer Kris Wu, who shouldered a large inflatable creature for the finale, turning “#Kris Wu Walks Runway With a 2M Doll” into a trending topic on Weibo, China’s second-largest social messaging app.

Historically, only one-third of Louis Vuitton’s sales to Chinese shoppers have taken place on the mainland, where VAT and import duties have inflated prices relative to Europe and other parts of south-east Asia. But with fewer Chinese people travelling, Burke says they are “buying much more at home” — despite Louis Vuitton raising prices in the country by 3 per cent in March and another 5 per cent in May. (The brand’s best-selling Neverfull MM tote, priced at £1,040 in the UK, is about 20 per cent more expensive in China.)

“They started off early and on the right foot in China — opening their stores in the best possible locations, with ample facades and footprints,” Bernstein analyst Luca Solca says of Louis Vuitton’s success in the territory. The brand was quick to identify regional tastes, he adds, introducing smaller-sized handbags, watches with metal straps and plenty of red. “And now they are all over the place with Chinese social media.”

“It’s taken many people by surprise, how fast the market became so sophisticated,” says Burke. “Five years ago, China was [considered] less fashion forward [than Europe and the US]. Today that is not the case.”

Despite Vuitton’s comparative advantages in China, it is by no means immune to the pandemic’s impact. Like other brands whose stores were closed for much of spring, it is facing a potential inventory glut. How will the brand dispose of its unsold shoes and handbags?

Burke is quick to correct my assumption that Louis Vuitton is especially overladen with goods. “We have the same amount of inventory today as we did last year,” he says.

Unlike the majority of smaller brands, Louis Vuitton owns most of its factories, which enabled it to largely halt production in mid-March. “We closed all 17 of our factories in France for two months,” he says — “a very expensive endeavour”, he adds, as the company kept all its employees and did not apply for state help. Some of the factories partially reopened in April to produce masks for Paris hospitals; normal production resumed in June.

To reduce inventory further, Abloh and women’s designer Nicolas Ghesquière instructed their teams to reuse leftover pieces and fabric in their next collections — which is why the cloud-print tracksuit and laser-cut hoodie from Abloh’s January collection appeared again on the catwalk in Shanghai this month.

When pressed, Burke does not deny that some of this spring’s unsold merchandise will ultimately be destroyed — a common practice among luxury brands who are loath to damage brand value by selling their goods at too deep a discount. (Or in Vuitton’s case, any discount at all. It does not mark down and has no outlets.) France banned the destruction of unsold consumer goods last year, but the rule does not take effect till 2023. “Of course we will live up to that,” he says.

When it comes to reducing unsold stock, Burke says he is more focused on what the company is doing towards the beginning of the production cycle. That means not making more than it can sell and keeping factory assembly lines nimble so they can pivot to better-selling styles. “We spend most of our energy on making sure we have as little inventory as possible,” he says, noting that even during the pandemic there was a 50 per cent chance its 100 bestselling items were out of stock in store.

He is critical of brands who are not doing the same. “That’s the problem the fashion industry has — they are trying to grow too fast. When you grow too fast, you will inevitably produce too much,” he says. “We will not solve the [sustainability] problem in the fashion business if we don’t commit to slower growth.”

Burke’s competitors are not likely to agree — for them, slowing down might mean ceding even more market share to behemoth LVMH. It increased its sales by 15 per cent in 2019, far faster than the 4 per cent growth for the sector overall.

As part of its sustainability efforts, Louis Vuitton is taking greater ownership of its supply chain. That is one of the reasons it bought the Texas ranch and retained 16 heifers from the original herd. Although there are no plans to use their leather for handbags, Burke says it will teach the company about the raw material that goes into its products. “You can’t change an industry from the outside,” he says. “We have to have a ranch. That’s how you learn.”

Last year, the ranch acquired a bull and named him Michael.

When asked whether it was named after him, Burke chuckles. “They named one of [its] offspring the name of one of my sons,” he says of the ranch’s staff. “I have nothing to do with it.”