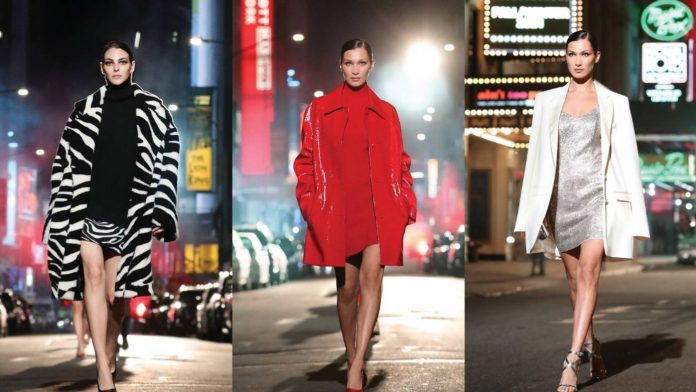 To celebrate his 40th anniversary, Michael Kors has released a special MK40 Reissue Capsule featuring QR code technology that directs customers to a microsite to find out more about the piece, including archival photos, anecdotes, and videos.

The 15-piece capsule, which was unveiled during the designers autumn/winter 2021 catwalk show in Times Square in April, features styles from previous seasons that exemplify the “glamour, timelessness and versatility of the Michael Kors brand,” all of which have been handpicked by the designer himself.

Commenting on the collection, Michael Kors said in a statement: “The MK40 Reissue Capsule combines timeless fashion, modern technology and a little bit of storytelling all at the same time. When you scan the QR code, you’ll be able to connect with the garment’s history and have a piece of that story right in your closet.”

Each of the garments in the capsule have unique stories, many tying back to the supermodels and stars who wore them, including Madonna, Cindy Crawford, Giselle, and Helena Christensen, and they all have a unique QR code sewn inside.

Upon scanning, the QR codes will take customers to the autumn/winter 2021 Michael Kors Collection microsite at MichaelKors-Collection.com, where they will find exclusive stories about the piece, including archival photos, personal and historical anecdotes, and videos of Kors speaking to the look.

This marks the first time in the brand’s 40 year history that the designer will reissue items from his archives and includes a camel double-faced cashgora wrap dress that debuted on the autumn/winter 1991 catwalk, worn by British model Gail Elliott and an ivory/black zebra intarsia shearling coat, black cashmere turtleneck and an ivory and black zebra wool jacquard skirt from autumn/winter 1994.

Other highlights include a scarlet red crackle patent leather balmacaan coat, originally worn by Cindy Crawford on the spring 1991 catwalk, showcased by Bella Hadid in the autumn/winter 2021 show. A gold bonded leather trench coat from autumn/winter 1991 and a white silk georgette kimono gown with paillette hand embroidery from autumn/winter 1992.

Kors added: “I selected a lot of really iconic pieces, all of which are over 20 years old. Everything from a Swarovski diamond-encrusted slip dress from the Resort 2010 collection that Madonna wore as Woman of the Year on the cover of Glamour to a fabulous cherry patent leather coat that Cindy Crawford first debuted in our spring 1991 runway show.

“I think we all have to remember that the best fashion, it’s not fast fashion, it’s fashion that lasts and gets better with time. Each garment in this capsule has an unforgettable story attached to it, and with the QR code technology, we’ve found a fantastic way to connect with the past and bring these heirloom styles to the next generation.”

The MK40 Reissue Capsule will be released in Michael Kors Collection stores and on MichaelKors.com in monthly drops.