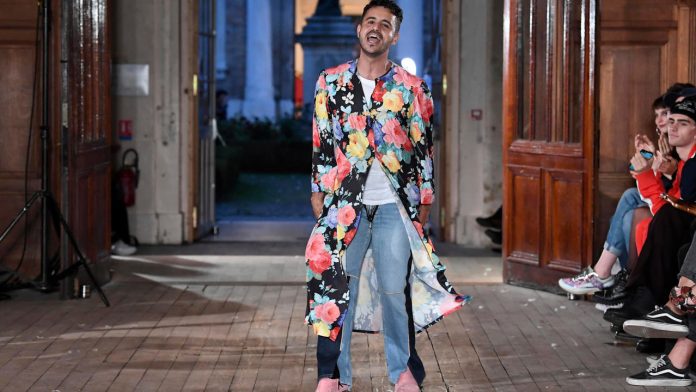 Brazilian designer Francisco Terra of French upstart brand Neith Nyer says the Covid crisis has freed him from the need to follow the usual fashion playbook.

Terra is organising one of the few live catwalk shows during men’s fashion week in Paris that began Tuesday — but he is doing it outside the official line-up and in his own style.

His intimate show, with around 100 guests, takes place Thursday in the Consulat, an art centre based in a former electricity sub-station, to be followed by a four-day pop-up store to get direct feedback from clients.

“Covid has allowed me to see many things clearly… to free myself from the shackles of the calendar and seasons,” the 37-year-old told AFP at his apartment-cum-studio in Paris.

It is the first time since launching his label that Terra did not apply to be part of the official Paris calendar.

And after more than a year of lockdowns and virtual gatherings, he said he had no interest in making video clips like the vast majority of fashion houses.

“Clothes are meant for living. I’ve been very frustrated with these digital presentations of the past year. I couldn’t get into it,” he said.

While France’s fashion federation declares itself “democratic”, giving equal weight to all members, Terra said trying to match the huge shows of mega-brands was a struggle for fledgling labels like his.

Another major obstacle has been the insistence on separating men’s and women’s weeks.

“That has been a problem for me since the start. I have freed myself from questions of gender, I’ve always mixed them up in my shows.”

The dates are also difficult, Terra added, since the pret-a-porter women’s shows fall in March and September when the “concept stores” that provide his biggest sales have often blown their budgets for the season.

There are other practical considerations, such as wanting to sell coats in September rather than wait for the winter shows when it’s already cold.

And while it is financially important to present his work during fashion week, when the buyers are all in Paris, the shows are less vital in terms of image.

“I don’t think we really need the calendar,” he said. “The image of a young brand is made on Instagram, with celebrities.”

His sales have been boosted in the past by US singer Miley Cyrus wearing one of his pink silk dresses or model Bella Hadid appearing on social media in one of his silk skirts and asymmetric latex tops.

There is also a very topical focus on the environment.

“It’s a challenge,” he admitted. “When we speak to customers about recycling and bio, they think it will all be rough, ugly or sad.”

Hence all the bright colours.

“The total pink look — maybe that’s my colour,” he said with a smile.

“I’m determined to get people wearing colourful things in Paris, which is very chic but also very sombre and dark, especially in winter.”