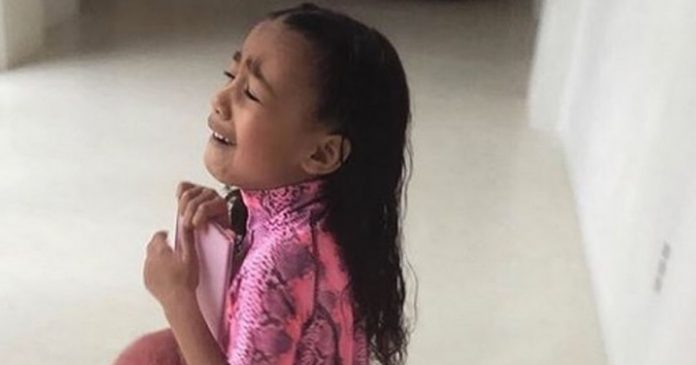 North West clearly has a taste for designer fashion and enjoys access to her mum Kim Kardashian’s high-end wardrobe.

But it seems she wasn’t prepared when she didn’t get her own way over a pair of pink snakeskin knee high boots she had snatched from the reality star’s closet.

The five-year-old was having somewhat of a fashion moment as she put on a stylish outfit for the day, matching her pink snakeskin dress with the boots – that appeared to be a pair of unreleased Yeezy’s made specially for her mum.

But North ended up throwing a tantrum when Kim banned her from wearing the £620 heels.

The 38-year-old KUWTK star wrote alongside a series of images of her eldest daughter: “Sooooo Miss North dressed herself and thought she was ready for the day until I explained she couldn’t wear my boots.”

In the first image North looked impressed with her all-pink look, lazily sat on the floor admiring the boots.

Northie then does a catwalk for her famous mum, teetering on the heels while clutching onto her pink teddy bear backpack.

The youngster then looks like she’s making a dash for the front door, until Kim stops her.

It’s in the last picture that we see the true extent of North’s adorable meltdown, after her mum told her she wasn’t wearing the boots.

Kim has previously spoken about North’s love of fashion and make-up and called her daughter very stylish.

She even landed her first solo magazine cover for WWD Beauty earlier this year.

Kim, who also shares son Saint, three, and daughter Chicago, one, with husband Kanye West , said: “My most stylish and beautiful baby girl North shot her 1st cover for @wwd !!!!

“She loves fashion & beauty and has so much fun doing this! * I toned down the color of the cover just to blend in with my IG feed so don’t repost this front cover but swipe to see the original and more pics from the shoot!