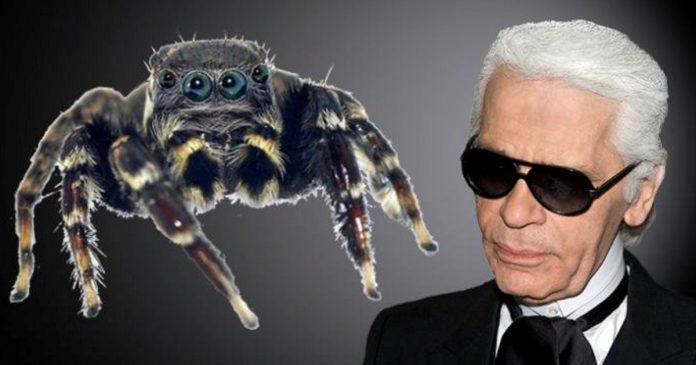 A new species of jumping spider has been discovered and named after Karl Lagerfeld, after the finders thought the arachnid bore a resemblance to the Hamburg-born fashion icon who died in February.

It is true that Lagerfeld didn’t have eight eyes and legs while the spider — Jotus karllagerfeldi — does. But they seemed to share a similar pared-down aesthetic, explain Dr. Danilo Harms of the Center for Natural History at the University of Hamburg, Dr. Barbara Baehr, Queensland Museum of Brisbane, and Joseph Schubert of Monash University, Melbourne.

To wit: The spider is black and white, and Lagerfeld had iconic white hair and a Kent collar paired with black sunglasses and gloves, they explain in their introductory publication in Evolutionary Systematics.

“The animal reminded us with its colors of the reduced style of Karl Lagerfeld. For example, we associate the black leg links with the gloves he always wore,” Harms says.

Other hunting spiders typically have bright red and blue coloration, so this one’s modest palette stands out. With all due respect to arachnophobes, this is one adorable spider.

It is worth noting that Jotus karllagerfeldi was not found serendipitously in the wild while eating bugs. A longtime dead one was noticed in the Godeffroy Collection kept at the University of Hamburg, which had been collated by “inquisitive and wealthy tradesman” Johann Cesar Godeffroy, who funded explorations to Australia in the 19th century.


To be fair, it is hard to notice. Adult Jotus karllagerfeldis measure 5 millimeters (0.2 inches) in length at most, and, as said, by the criteria of the jumping spider set, its color scheme is subdued.

Stay up to date: Sign up to our newsletter

Thank you for signing up.

The email address you have provided is already registered.

Jumping spiders do not weave webs. They have good eyesight and hunt for prey, which they may or may not catch by jumping on it.

This is not the first spider whose name was inspired by a celebrity. In 2017, Harms and Baehr, joined by Dr. Robert Raven from Queensland Museum, discovered an unknown aquatic arachnid in Queensland that appeared during low tide. That brought to mind — they say — Bob Marley’s reggae song “High Tide or Low Tide,” which is why they named the spider Desis bobmarleyi.

In other spider news, a new species of sheet-web spider has been discovered in Stygian River Cave, Indiana. It hasn’t been found anywhere else, says University of Indianapolis assistant professor Dr. Marc Milne in the journal Subterranean Biology.

This is also a wee creature, just 2 millimeters in length, which makes the flat sheet-like webs it weaves all the more impressive.

The new spider was named Islandiana lewisi, in homage to the person who actually found it while exploring the cave: Dr. Julian Lewis. It is believed to feed on even smaller arthropods, such as hexapod springtails living on the cave floor.