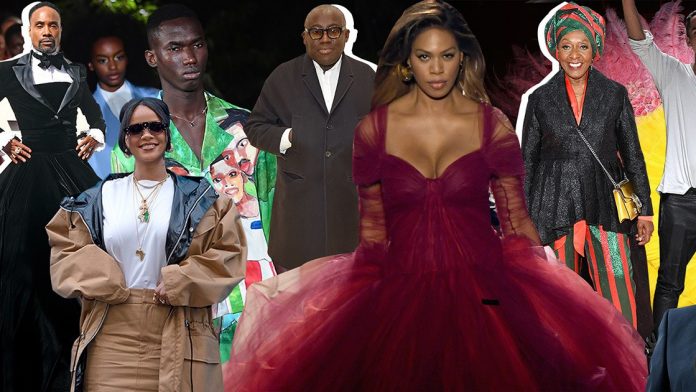 The 2010s were a watershed moment for diversity in fashion.

Marked by a series of breakthroughs that challenged the status quo and opened doors for minority groups to be represented within all facets of the business, this decade will be remembered as a time of rapid change when fashion was forced to examine its practices. Good design has always served to mirror societal concerns, but never before has the industry been asked to rigorously question itself about these issues. Realities once considered distractions from the stylish fantasy sold by luxury brands became the critical subjects of conversation for consumers and a new generation of leaders who demanded that the truths of race, gender, body size, disability, and inequality be acknowledged.

No segment of the business was left untouched; modeling’s narrow definition of beauty expanded thanks to rise of Ashley Graham, Paloma Elsesser, and a host of new stars who represented realities rather than lofty ideals. Milestone appointments at the luxury houses Balmain and Louis Vuitton allowed black designers Olivier Rousteing and Virgil Abloh to inhabit spaces once closed to people of color. Trans women and men like Andreja Pejić, Teddy Quinlivan, and Nathan Westling shared their stories of self-discovery, rising to prominence for their artistic endeavors while demonstrating that old concepts of style defined by gender were no longer relevant.

These moments have led to the expansion of the fashion community and a renewed understanding of its ability to encourage transformation beyond the sartorial. Still many of them would not have happened if the industry were left to its own devices. Fashion’s move towards inclusion has been mostly reactionary; broader social movements—fourth-wave feminism, #MeToo, and Generation Z’s ingrained activism—have impacted its understanding of what is stylish and whose voices ought to be heard. The establishment’s ability to dictate trends and protect its insular worldview was challenged by the rise of social media and an audience no longer willing to accept a passive role in consumption.

In an age where a refusal to represent or acknowledge certain groups can result in viral outrage, brands have adapted in order to maintain relevance. Cynics will cite the bottom line as the sole impetus behind this push, but regardless of how we got here, the shift has resulted in innovation and a growing sense of communal responsibility. The recent launch of corporate initiatives to increase inclusion—Chanel’s hiring of a diversity officer earlier this month, Gucci’s internal diversity initiative to increase hiring of multicultural candidates and create scholarships for minority students, etc.—acknowledges the structural problems that need to be resolved in order to make the last 10 years of breakthroughs more than a stopgap.

As the decade comes to a close, it’s easy to accept the changes it has brought about as the new normal, but a series of firsts only matters if it leads to continued evolution. The true impact of these turning points will come when they cease to be radical. When a black creative director at a major French house, a trans woman on a magazine cover, or a disabled person on a runway isn’t a rare occurrence or something played for shock value, only then will true equality be in reach. Still a look back at the milestones that led to the current climate illustrates exactly how far things have come.

Barack Obama was sworn into office in 2009, but Michelle Obama’s impact on the fashion industry helped to define the decade that followed. The former first lady championed American design talent throughout her time in the White House, introducing a new audience to names like Maria Cornejo, Narciso Rodriguez, and Jason Wu while also supporting accessible brands like J.Crew. An arbiter of style in Washington and beyond (as a wardrobe of Balenciaga, Stella McCartney, and Givenchy on her recent book tour has proved), Michelle Obama’s presence in the fashion world became a part of her image and American history.

Beauty contracts are the mark of a model’s global success, but until recently minority stars were rarely given the opportunity to front cosmetics campaigns. Chinese runway queen Liu Wen’s appointment as the first Asian face of Estée Lauder opened doors to a more inclusive beauty space.

On the heels of Christophe Decarnin’s exit from Balmain, 25-year-old Olivier Rousteing became the French house’s creative director, a move that caused a stir at the time. Unique due to his race and relative youth, Rousteing’s appointment broke boundaries. Outspoken about fashion’s fraught relationship with race and the need for greater inclusion, Rousteing has filled Balmain imagery with his unapologetically sexy clothes and a global army of beauties. Arguably Rousteing paved the way for breakthroughs like Virgil Abloh’s appointment as artistic director of Louis Vuitton menswear seven years later.

Trans people have always been an integral part of the fashion community, but rarely have they been allowed to live their truth. Vintage stars like April Ashley, Caroline Cossey, and Tracey Norman rose to prominence for their talent but experienced career difficulties the moment their gender became public knowledge. Unlike their predecessors, the current generation has been able to express themselves while retaining their presence in the public eye. Groundbreaking models like Andreja Pejić and Riccardo Tisci muse Lea T. came on the scene at the start of the decade and sparked a conversation about gender and beauty that moved from fashion circles to newspapers and even The Oprah Winfrey Show. Both have shared their story via documentaries or op-eds, becoming vocal activists for the LGBTQ+ community and ushering in a period where their fashion peers could be as outspoken.

When Bethann Hardison—activist, former model, and agency founder—noticed the homogenous nature of fashion’s runways, she called on her peers to do better. In an open letter to the fashion councils of New York, London, Milan, and Paris, Hardison held brands that didn’t use models of color accountable—a move that eventually led to casting changes across the board.

The casts at Becca McCharen-Tran’s Chromat shows are about more than which model is popular at the moment. McCharen-Tran fills her runway with people of all sizes, shapes, genders, and abilities, dressing them in her brand’s vibrant designs for a celebration of the body. It’s an idea that shouldn’t seem radical, yet season after season it does.

China: Through the Looking Glass, 2015

Each theme selected by the Costume Institute for its annual exhibition serves to reflect the current state of fashion, but few have been as timely as 2015’s China: Through the Looking Glass. Centered on Western fashion’s complicated relationship with Eastern culture, it arrived at a time when the prominence of Chinese market had reached new heights. A respectful examination of the connections, parallels, and moments of blatant cultural appropriation that have occurred as fashion attempts to draw inspiration from China’s rich heritage, it was a welcome historical hot take.

Ashley Graham began her modeling career in 2001, but her true breakthrough moment began with 2016’s cover of the Sports Illustrated swimsuit issue. The first plus-size model to ever pose for the publication’s front page, Graham kick-started a conversation about bodies in fashion that carried over into the mainstream and helped propel her toward household-name status.

K-Beauty Crosses Into the American Mainstream, 2016

The soft power of Korea’s cultural influence extends into everything from pop music to clothing, but it’s the beauty market that’s been truly rocked by the global dominance of Korean cosmetics and skin care. Innovative ingredients including snail mucin, bee venom, and 24-karat gold have grown cult followings for brands like Innisfree, Banila Co., and Dr. Jart+.

After a look in Gucci’s Cruise 2017 collection drew the ire of the internet for its similarity to a classic design from Harlem fashion icon Daniel “Dapper Dan” Day, the luxury house turned an embarrassing misstep into an opportunity for collaboration. Best known for his reinterpretations of logo’d luxurywear in the 1980s, Day went on to create a capsule collection for the brand and a special studio devoted to customized pieces.

A career as a groundbreaking stylist whose striking editorials for i-D and Italian Vogue set the standard during the early ’00s led to Edward Enninful being named the first black male editor in chief of British Vogue in April 2017. Immediately dedicating himself to creating a more diverse vision for the magazine’s content and staff, Enninful brought in longtime collaborators like Naomi Campbell and director Steve McQueen as contributing editors.

As the first hijab-wearing model to walk international runways, Halima Aden serves as a role model for millions of girls and a powerful representative for Muslim women in fashion. Since appearing at shows like Yeezy, Alberta Ferretti, and Max Mara during her debut season, Aden has continued to break boundaries, becoming the first model to wear a hijab within the Sports Illustrated swimsuit issue, serving as an ambassador for UNICEF, and designing her own collection of modest accessories.

When luxury e-tailer 11 Honoré launched in 2017, its mission was simple: Bring the best of runway fashion to plus sizes. The site began with a handful of labels and now features more than 80 high-end designers, ranging from Altuzarra to Zac Posen. In February the brand kick-started New York Fashion Week with an event that illustrated the importance of its undertaking, underlining how rare it is to see a show with more than one or two models beyond a sample size. Laverne Cox’s twirling cameo was fire.

Most TED Talks are thought-provoking, but few have the impact of activist Sinéad Burke’s. An advocate for the needs of the disabled, Burke illustrated the importance of design and how it can be used to improve the lives of communities beyond the able-bodied. Burke, who has shared her message everywhere from the World Economic Forum in Davos to the pages of British Vogue, now consults with brands like Burberry on how to make their clothing and flagship stores more accessible.

When Kerby Jean-Raymond took his Spring 2019 collection to Weeksville, Brooklyn, he gave New York Fashion Week a history lesson, while providing a glimpse at its stylish future. One of the first communities founded by freemen after the abolition of slavery in New York, Weeksville served as the backdrop for a show concerned with the modern African American experience and a political climate where even routine aspects of black life have become dangerous. It was almost unanimously touted as the most uplifting show of the season.

Nowhere is a diverse viewpoint more important than behind the camera. While we’ve seen marked improvements with casting and the subjects covered within the pages of glossy magazines, photographers of color still face an uphill battle. When 23-year-old Tyler Mitchell became the first African American photographer to shoot a cover of American Vogue, capturing arguably the world’s biggest star at her most candid, it was a breakthrough moment for creatives of color behind the scenes.

After the successful launch of her game-changing cosmetics brand, Fenty Beauty, Rihanna began work on her most ambitious project to date, a fashion label with LVMH. When it was launched in May, Fenty became the only new brand created by the conglomerate since Christian Lacroix back in 1987 and its first with a woman of color at the helm. A luxury interpretation of Rihanna’s streetwise personal style, the first collection debuted to raves.

Hollywood’s red carpets are a showcase for the world’s best fashion, but too often they’ve relied on outdated ideas about gender. When Pose star Billy Porter arrived at the Oscars in a tuxedo gown from Christian Siriano, it was the night’s boldest style statement, one that left him feeling empowered. “It really is astonishing how much of an effect clothes have on your spirit,” Porter told Vogue beforehand. “From this [Oscars] moment, I want people to understand that you don’t have to understand or even agree with other people’s authenticity or truths, but we must all respect each other.”