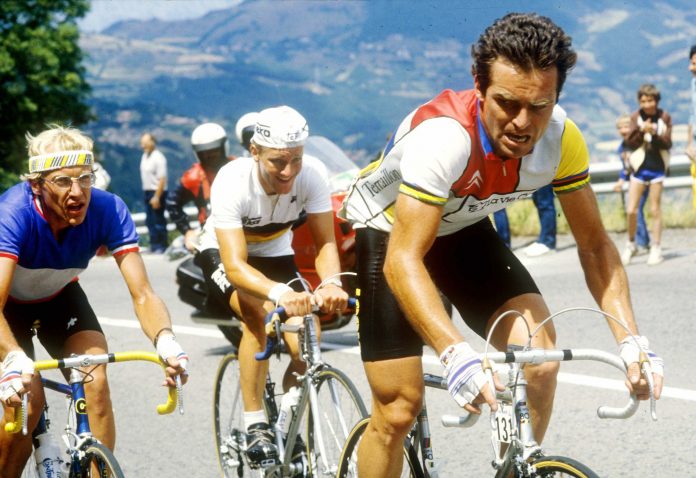 From short shorts to headbands and bleached hair, here is the fashion that has disappeared from cycling

As the 108th Tour de France marches on, we cannot help but look at today’s peloton and think it has all gone a bit corporate.

The kits are like a bland amalgamation of middle management, the sunglasses are now so large its like a group of cycling welders and if it wasn’t for the Basques, there wouldn’t even be any ear piercings in the peloton.

Back in the day, it could not have been more different. Cycling was as much a Milan catwalk as it was a sporting event with the greats such as Fausto Coppi, Hugo Koblet, Rudi Altig and Gert-Jan Theunisse all taking great care in how they looked on the bike.

And when these legends were riding, it was much more about individual style and fashion trends. Headbands, short socks, fluoro. Most looks come full circle, dropping off the radar before returning a few years later – fluoro being a good example of this – but some fashion trends have seemingly fallen off the edge of the world, never to return again.

Below are seven trends from cycling’s past.

The rightful decision of the UCI to introduce compulsory helmet use in the professional peloton in 2003 did a lot of good but has one huge negative knock-on effect: it killed the use of the headband in pro bike racing.

Designed to keep sweat and hair from the eyes, worn to look as cool as Sacha Distel, the headband was the ultimate peloton fashion statement of the 1980s with riders such as Bernard Hinault, Gert-Jan Theunisse and Pedro Delgado all partial to rocking the band throughout their careers.

Yet nobody wore the headband quite like Laurent Fignon, a man who would have looked much more comfortable reading Camus over a piping hot espresso in a Parisian cafe than crushing the Tour de France.

The original hipster, Fignon’s headband use was practical, keeping his flowing blonde locks from draping down in front of his oval spectacles but set off a look that has since been emulated by hill climbers year upon year.

An acceptable alternative to the headband is snipping the top out of a casquette, a-la Andrea Tafi, for the Vegas gambling visor look. Very 1990s, very Paris-Roubaix, very cool.

There was always a hell of a lot of thigh on show. Sean Yates, Eddy Merckx, Roger de Vlaeminck always had plenty of leg out, come rain or shine.

They had no time for silly tan lines, they made sure their cycling shorts stopped firmly above the quad to keep their golden glows as even and well spread as possible to prevent any embarrassment when poolside on holiday.

Nowadays it is all about having shorts down to the knee. Rigoberto Uran is the biggest offender of this, often having the cuff of the bibshorts flapping at the knee. Somebody have a word because while it’s probably better from a performance point of view, most likely an aerodynamics standpoint, it’s certainly not better from a style perspective. And let’s be honest, it’s all about how we look on the bike, isn’t it?

Tape on the nose

If you grew up watching cycling in the late 1990s/early 2000s, you were probably a fan of either Lance Armstrong or Jan Ullrich.

If you preferred ‘Big Tex’, you’d likely be sporting a set of Oakley sunglasses, Nike cycling shoes and have a penchant for staring down journalists in press conferences. If ‘The Kaiser’ was your boy, then it was Adidas, fluctuating weight gain/loss and, of course, a nasal strip. We’re unashamedly the latter.

The very things made famous by footballer Robbie Fowler, it was claimed a nasal strip would lift your nostrils and open the nasal passage to make it easier to breathe – a claim that has since been debunked – but it’s probably the marginal gain that led Ullrich to five second-place Tour de France finishes and one yellow jersey. Not anything else.

Peak Ullrich nose strip was the 2001 Tour. The German was National Champion, resplendent in an iconic tricolour, the red, black and yellow dissecting a white T-Mobile jersey, with alternating black and white Adidas stripes on his shorts and jersey, all matching his glistening nose strip. It was a huge look. If it was a fashion contest, Ullrich would have won that Tour.

These days sock height has got so out of hand that the UCI has got a dedicated squad of old men travelling to races across the globe measuring riders’ socks to make sure they are not too long. Ridiculous, but sadly true. We blame Mathieu van der Poel, his socks are just so high.

This would have never been an issue back in the day, however, as it was the opposite that was, in fact, in fashion.

Scroll through the archives and you’ll see the likes of Merckx, Coppi and Hinault had no time for cloth covering their perfect ankles. Instead, it was all about the material stopping short of the lateral malleolus (the pointy bit on your ankle).

Stare even closer at the pictures and you’ll notice that most of the time riders had actually rolled their sock down from the ankle, such was their disdain for dodgy tan lines halfway up their calf. With everything being aero these days, the chances of a return to short socks are slim and, secretly, we are happy that’s the case.

Around two decades ago, many in the pro peloton would have looked better placed in a boy-band than in a professional bike race. Frosted tips, bleached highlights and everything in between was a popular hair-do of choice for plenty of bike racers over the years. The likes of Richard Virenque, Danilo Di Luca and David Millar are all examples of riders who once took to their locks with a squeeze of lemon and a dose of sunshine.

While they may have innocently looked like pale imitations of a young Justin Timberlake, rumours have it that the real reason behind bleaching your hair was slightly more insidious. Apparently, bleaching the hair affects its follicles to such a degree that detecting PEDs becomes impossible.

Whether this was the reason behind the bleached craze of two decades ago, who knows, but what we do know is that these days, the peloton is occupied with much more sensible hairstyles.

Pro cycling kits are a bit boring these days, let’s be honest. Even the fun ones like EF Education have clearly been designed by a collection of oat milk fans who brainstormed moods in a WeWork in downtown San Francisco.

Back in the day, kits were much more cut and dry. Castorama’s kit looked like work overalls because it’s a DIY store. The Carrera Blue Jeans kit looked like denim because it sold denim. Mario Cippolini wore a zebra skinsuit to advertise zebras…

The trend of making pro cycling kit literal was a good one and needs to return. Who doesn’t want Deceuninck-QuickStep’s kit to be a collage of double glazed windows and laminate flooring? A Picasso emblazoned on the back of AG2R-Citroën’s jersey? Yes please!

Tubulars around the shoulders

Modern-day cycling means that pro riders can have a flat tyre changed in an instance. Snap their fingers and a burly mechanic will have drilled their defunct wheel from underneath their frame and swapped it for a shiny new one in seconds.

Back in the days when nutrition centred around red meat and cognac, however, professional cyclists were not quite as fortunate to have an army of personnel following behind in team cars. This meant mending their own flat tyres which, ultimately, meant riding with a spare tubular tyre wrapped around their shoulders. It was a practical solution that became something of a fashionista look immortalised by style icon Fausto Coppi.

Obviously, modern technology means that riding with a spare tyre draped across them is no longer necessary. It’s a shame, mind, because it gave pro cyclists a more human appearance despite their superhuman feats on the bike.