Home Catwalk These are the queer icons shaping fashion 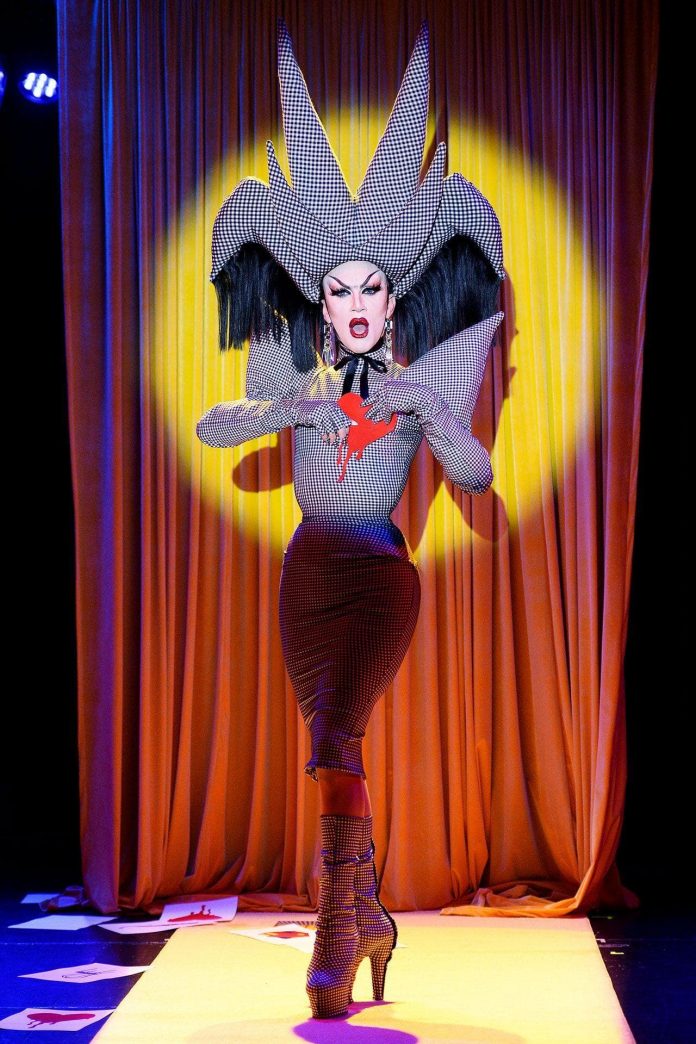 Opening Ceremony’s spring/summer 2019 (above) show wasn’t just a show, it was an extravaganza. Taking place at New York’s (Le) Poisson Rouge and curated by renowned drag queen, artist and winner of RuPaul’s Drag Race series nine, Sasha Velour, the two-hour affair saw a vast cast of LGBTQ+ performers and models present an elaborate, joyfully executed celebration of queerness. Oh, and some clothes too.

“I didn’t really grasp the magnitude of what we were doing until I was standing on stage in front of Nicki Minaj, Whoopi Goldberg and Baz Luhrmann, wearing a three-foot tall headpiece dripping in hair, a dress I could barely move in, all while balancing on 11-inch heels and lip-synching to Dionne Warwick!” Velour exclaims. As with so many fashion shows, it was all a whirl of grand ambitions and frantic last-minute assembly. One that, predictably, left people talking for days.

It felt like the right time for a show like this – one putting queer people front and centre, both on stage and behind the scenes. “Although this certainly wasn’t the first collection to take inspiration from queer styling (or even to star LGBTQ+ or drag models), to my knowledge it is the very first to invite a working drag performer and nightlife producer to design the show from the concept onward,” Velour notes. “It really is such a gift to be present at the table in that sense; to have a role in crafting an evening that represents our voices and tastes alongside our imagery.”

The worlds of fashion and queer culture have forever been intertwined. Clothes have long helped shape and articulate identity (as well as restrict it), especially for those whose identities are marginalised or under threat. It’s something that this year’s Met Gala theme and Costume Institute exhibition, Camp: Notes on Fashion, picks up on, taking Susan Sontag’s famed essay of 1964 as its starting point. Camp’s roots are firmly anchored in gay culture, with Sontag’s 58 fragmented notes outlining an aesthetic and sensibility reliant on pastiche, subversion and high drama. One that, historically, saw expressions of sexuality coded into an intricate series of choices around dress and mannerism. However, camp is expansive. Over time it has been described as everything from a language to a particular way of seeing.

Sontag’s work is as mercurial as the subject matter; the Costume Institute’s head curator Andrew Bolton says, “In all these years we’ve been talking about camp, still nobody has a definition. They might agree to the fact that it came out of queer culture. They agree that in the modes of expression it’s often [incorporating] exaggeration, artifice, ironies. But when it comes to defining it, it’s impossible because it’s amorphous, it changes so much, it’s parasitic.”

Among the various strands and meanings of camp, the exhibition explores the relationship between fashion, camp and queer culture in a number of ways. As Bolton observes, “Part of the idea behind the exhibition is to isolate an aesthetic that’s become so invisible, and show its roots and its origins.” He also wanted to foreground the political implications. “It’s still being used without realising it, and it’s interesting because when you talk to young kids about drag queens and gender fluidity, it’s not something they think about consciously because it’s so integrated into our lives. So part of it is isolating camp in order to talk about it, but also partly to show appreciation for it too.”

In doing so, the exhibition also looks to a long lineage of LGBTQ+ icons, from playwright Oscar Wilde to Victorian cross-dressing duo Fanny and Stella. The latter’s significance is illustrated via two dresses from Erdem’s spring/summer 2019 collection (above), where the pair became reference points for a show both dreamy and dramatic. And Erdem isn’t the only designer who’s been delving into the queer history books recently. Spring/summer 2019 saw an array of acknowledgements of LGBTQ+ figures: from Matty Bovan drawing on Derek Jarman to Gareth Pugh paying his respects to Judy Blame.

First though, back to Fanny and Stella. Otherwise known as Frederick Park and Ernest Boulton, the pair became something of a sensation in 1870 when they were arrested after frequenting the theatre in women’s garb, as they were regularly known to do, and brought to trial on accusations of sodomy. They were never charged, but the entire affair brought to light not only wide-scale police corruption, but also the establishment’s disquiet with – and need to make a moral example of –  unabashed, unconventional displays of gender and sexuality.

Erdem first discovered their narrative after finding a plaque dedicated to the pair in Bloomsbury, where he and his partner Philip live. “When I started to research their story I was fascinated,” he says. “Fanny and Stella lived at a time when Darwinism was rife and the Republican movement was rising. They were living very much on the fringe of society. They were well-known nightlife characters in London.”

Using this as his starting point, Erdem researched the rich history of 19th-century cross-dressing – looking, too, at female performers who donned men’s clothes on stage. The results are gorgeous: an appropriately theatrical profusion of lace, lavish prints, black net veils, voluminous skirts, puffed sleeves and bright pink ribbons galore. “For me every season it’s less about exactly who the characters were but the trigger that causes you to go there with the collection,” he says. “This was about two women who dressed to be who they fundamentally were.”

Elsewhere in London, Bovan turned to Jarman (above), the mischievous, multitalented, deliciously frank film-maker and writer. Outspoken in his sexuality (and particularly trailblazing in his level of public honesty around his AIDs diagnosis), Jarman’s legacy remains a powerful one, both creatively and politically. Bovan first discovered Jarman’s films aged 19 after moving to London. “I loved his sense of ‘just get on with it’ – no lavish budgets, and he collaborated with friends to create something raw and something new. He told a story with film and always had his tongue in his cheek. He knew what he was making was a construct.”

Jarman’s DIY spirit and anti-establishment ethos comes through strongly in Bovan’s collection: from the clash of fabrics and textures – layers of netting erupting from dresses, screen-printed words proclaiming “Infinite Void” sliding across garments – to the cascades of crocheted flowers and bright plastic cable ties. There’s an impish exuberance to the clothes and headpieces, many of which wouldn’t look out of place at Andrew Logan’s Alternative Miss World competition (which, incidentally, Jarman won in 1975, under the moniker Miss Crepe Suzette).

Pugh’s collection, meanwhile, paid homage to Blame, another gay man who revelled in turning the mundane upside down. The influence of the late designer, artist, stylist and 1980s club maven, with his meticulous eye and taste for elevating everyday objects to unexpected ends, was keenly felt: echoes found in Pugh’s outlandish proportions, melodramatic makeup and generally playful approaches to outfitting the body.

Across the Channel at Givenchy, Clare Waight Keller was looking towards Annemarie Schwarzenbach: someone else who, to paraphrase Erdem, dressed to reflect exactly who she was. A remarkable Swiss-born journalist, novelist and photographer, she was best known for her extensive travels, androgynous style and numerous affairs with women (plus a face that the novelist Carson McCullers claimed “would haunt me for the rest of my life”). With her short hair and propensity for perfectly tailored menswear, numerous portraits suggest a figure both coolly self-possessed and comfortable with blurring any rigid definitions of masculinity or femininity. Keller translated this into a louche palette of blues, greens, silvers and browns, with plenty of boxy blazers and tailored trousers with room for striding along the way.

Other design houses have drawn on queer women and non-binary people in recent years – but in smaller numbers than their male counterparts. Alongside Schwarzenbach, there are the Surrealist artists Leonor Fini and Claude Cahun, both of whom have been referenced by Maria Grazia Chiuri at Dior: Fini’s love of costuming lending extra spectacle to spring/summer 2018’s couture show, and Cahun’s gender-neutrality (and, perhaps, time spent living on Jersey) informing a series of suits and vaguely nautical touches for pre-fall 2018.

Elsewhere, authors Virginia Woolf and Vita Sackville-West – whose exquisite, funny love letters deserve reissuing – have been called upon repeatedly. During Christopher Bailey’s tenure at Burberry, Woolf was often cited to conjure up a particular kind of thick cardigan-clad bohemianism – culminating in his spring/summer 2017 show, hooked on her novel Orlando, the theatrical ruffs and swishing coats riffing on a protagonist who switches gender, loves both men and women, and was very much an adoring tribute to the physicality and temperament of Sackville-West. More recently, Preen’s pre-fall 2019 drew on a visit to Sissinghurst Castle, where Sackville-West lived, by way of tartans, checks, lavish drapery and plenty of feather trim.

Givenchy aside, it’s interesting how many of spring/summer 2019’s explicitly queer-inspired offerings are also inextricably linked with what goes on after dark. Pugh’s tribute to Blame culminated in a Vogueing Ball in his honour, in collaboration with Benjamin Milan – a fitting send-off for someone who figured so vividly in London’s nightlife. Elsewhere, Ashish’s glitz and neon affair could have been lifted from a 1990s rave (and came with a series of messages about inclusivity – ones made especially resonant in the wake of the designer’s powerful words the week before on the decriminalisation of homosexuality in India).

It’s something Erdem is cognisant of too. “I was thinking about what Stella and Fanny would want to wear if they lived near King’s Cross during the 1980s and 1990s,” he reflects, “a time where there was this sense of taboo and all the warehouse parties were happening.”

I ask Velour about this. Why is nightlife, whether performance or club-oriented, especially important to queer communities? “Often we have no choice but to build our spaces and culture in the dead of night!” she says. “Very few queer people have the freedom to deliver their full queerness during the day. In many cases, making ourselves truly visible can even open up real danger.” In the case of Velour’s line of work, it’s also a question of economic necessity. “Drag is usually a late-night activity because most kings and queens have day jobs. I used to cover my eyebrows with glue in the bathroom at work, so I wouldn’t be late to the gig!”

Whether in daylight or after sundown, perhaps what feels especially intriguing about this handful of shows and reference points are the ways in which they’ve created a particular kind of dialogue with queer culture, both past and present. One running the gamut from crisp shirts to tongue-in-cheek offerings to some of the dazzling costumes soon to be exhibited at the Costume Institute. One unapologetic, celebratory, sly and often very beautiful too. It’s a dialogue set to continue into autumn/winter ’19/’20 – with Thom Browne’s office-inflected show (above) including graphic monochrome prints of sculptor and translator Una Troubridge, the long-term lesbian partner of author Radclyffe Hall.

There’s still undoubtedly a long way to go, especially when it comes to the role of queer people within the fashion industry – whether behind the scenes or on the catwalk (though it must be noted that Erdem, alongside other designers including Louis Vuitton and Marco Marco, emphasised the presence of trans, androgynous and non-binary models in their shows). But it’s an optimistic mood and one that’s left Velour hopeful for further visibility. “Queer-run operations, historically situated a bit outside the mainstream, have developed different ways of doing work that are just as valid. Given the opportunity, I think a lot of us would love to share our talents with a wider audience.”