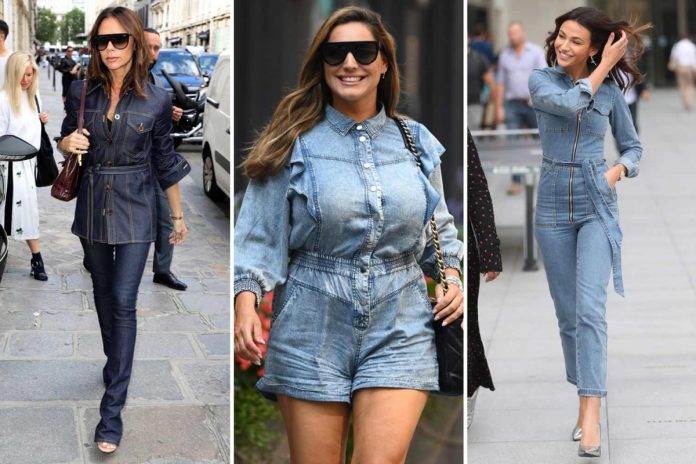 VICTORIA Beckham, Michelle Keegan and Kelly Brook are just three of the reasons that double denim has elevated from naff to fab.

The once-derided combo has recently become the go-to look for many A-listers.

Michelle Keegan proved that double-denim was far from unflattering in a stonewashed jumpsuit.

The tight-fitting all-in-one was a long way from a boiler suit and perfectly highlighted the actress’ curves.

Meanwhile Kelly Brook demonstrated how the look can work even in the height of summer.

The model looked hot hot hot in a denim blouse paired with a matching pair of hot pants as she stepped out for a stroll in central London.

As a fashion designer Victoria Beckham has made her name for herself in the industry for her immaculate looks.

She looked back to her 90s Spice Girls roots as she too embraced the controversial trend with an indigo jacket and jeans from her own collection.

And Amanda Holden took a hold of the trend in a chic denim dress as she headed to work at Heart Radio.

Elsewhere Love Island’s Paige Turley was glasual in a ripped jeans and jacket combo following a visit to a music studio in March.

Even the Duchess of Sussex herself Meghan Markle has embraced the trend.

She mixed up the look with black jeans and a blue denim jacket during her visit to Cape Town last year.

Beyonce and her daughter Blue Ivy both rocked double denim, when they posed together.

They opted for a bleach wash blue, with butterfly motifs.

Kim, who announced on Tuesday that Keeping Up With The Kardashians is ending after 14 years, sported denim on denim alongside husband Kanye West last November.

The mother-of-four used the fabric in her own unique style to emphasize her narrow waist, wearing a denim corset and jeans with chaps.

Rihanna avoided looking too much like Britney Spears and Justin Timberlake circa 2001 by choosing a denim mini which showcased her legs.

Model sisters Gigi and Bella Hadid made the sidewalk a catwalk when they sported their own take on the trend.

Bella actually chose a denim one-piece jumpsuit, bringing the look up to date and showcasing her stunning figure.

Meanwhile, Gigi, pre-pregnancy, made her look one that was fit for the girl friend of a rock star – with a faded Pink Floyd T-shirt and boots.

I was homeless for two years before starting my own business, now I’m worth £208m

In other celebrity news, we told you why celebs like Amanda Holden and Alesha Dixon see teepees as the ultimate parent brag.

And these are the stars that have made housework sexy with half-naked lockdown snaps.