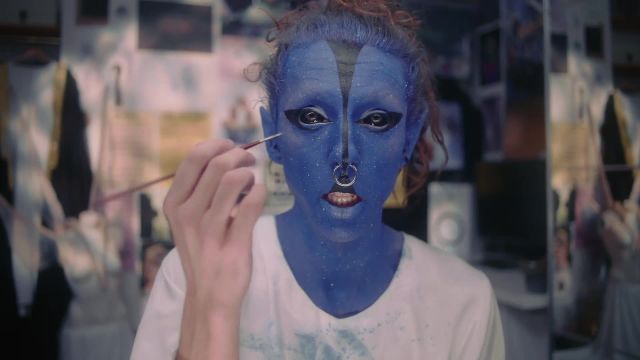 Today, Moon has been inspired to prepare for a purifying ritual performed in London’s Hackney Marshes. “We’re gonna be applying blue paint all over, sparkling with the stars and galaxies,” they explain. To start the transformation, Moon uses prosthetic techniques picked up from watching other artists and internet instructors, noting that if there were “a diploma from YouTube tutorials, we would definitely have one.” They apply Kryolan Spirit Gum to attach ear extensions, pointing out that the seams won’t have to be perfect since the connection will be hidden by a long black wig. Moon’s “most-used product” is Kryolan Aquacolor face and body paint in blue, representing the ocean at its purest. For the starry application, white body paint and water are mixed and flicked across the face (eyes closed) and neck with toothbrush bristles for a result that’s a “big, big surprise.”

Moon has already created a solution so they “could stop using the uncomfortable [contact] lenses.” Rather than temporary novelty Sclera lenses, they booked an appointment “some time ago in the sky above London” for inky black eye tattoos. “We are very lucky that we don’t need to be putting contact lenses in, otherwise we would be crying the whole blue face off,” says Moon, who mentions they saw a vision of having black eyes for as long as they can remember. Detailed linework, faux “vegan” pearls, and dustings of Cult Candy eyeshadows complete the galactic effect.

Moon approached @anthr0morph to create a pair of fluttering wings for 2019’s British Fashion Council Awards. Here, the wings are given new purpose, and a metallic cape from Rick Owens arrived just in time for the ceremony. Moon reveals that now, the cape is on “permanent exhibition on the main wall in our chamber” between life-size cutouts of Katniss Everdeen and Harry Potter. At home, they “literally live” in a pair of headphones. After creating soundtracks and audio projects, Moon is “excited about diving deeper into the sound dimension” by releasing their first single. “We definitely know we were made to be performing, so we cannot wait to dive into it!”

They point out that for the moment, outdoor, natural activities, art, and digital connections are some of the only ways of communicating “now that humxns are (or should be) self-isolating.” During this time and beyond, while “the digital connection is even more personal,” Moon hopes others will join them to fight against companies and powerful forces connected to suffering in all forms. “In the future, Moon’s final dream is to make it finally illegal to harm anyone for profit,” they explain. “If you stop supporting the wrong industries and companies, they will be forced to change.”

Special thanks to:
Animal Rebellion
No One studio