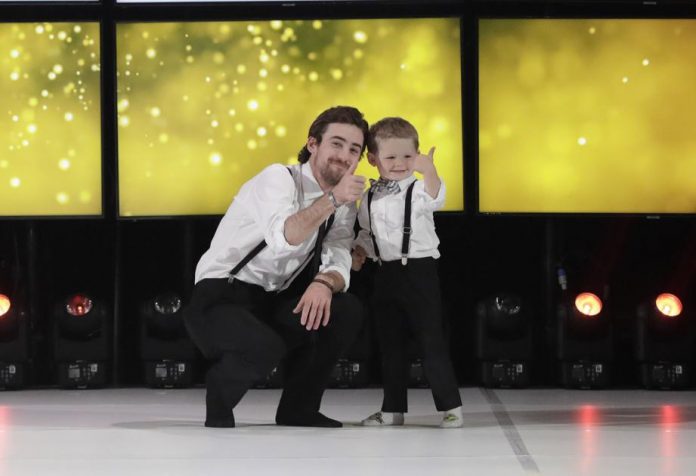 Two years — almost to the day — after being diagnosed with leukemia, a 3-year-old boy from Boone finally had his last cancer treatment on April 5.

Mason Eldred was given the diagnosis on April 4, 2017. Jason Eldred said when he and his wife, Brandy, were told about the diagnosis, they were devastated and assumed the worst.

“It’s real hard to hear,” Eldred said. “It’s like somebody hits you in the gut and you can’t breathe.”

Now deemed in remission, Mason was one of nine children selected to participate in the Martin Truex Jr. Foundation 10th annual Catwalk for a Cause on May 15 in Statesville. The organization is co-founded by Truex — the 2017 Monster Energy NASCAR Cup Series champion driver — and his longtime partner Sherry Pollex. The foundation raises funds and awareness for ovarian and childhood cancer initiatives. The foundation released a statement on April 30 stating it intends to surpass last year’s amount raised of $650,000. The foundation expected to raise $800,000 this year.

“It’s hard to believe how far we’ve come — from a fashion show with over 75 people in attendance to now a marquee event where over 600 patrons return year after year with the hopes of putting an end to this terribly underfunded disease,” the foundation said in the statement.

The highlight of the event is a fashion show featuring children who are in treatment or remission from cancer, according to the foundation. The children have the opportunity to strut on a runway with NASCAR drivers and their spouses.

Paired with Mason was 25-year-old Ryan Blaney — a third-generation NASCAR racer, according to Blaney’s website. Blaney and Mason had the chance to meet in March at the foundation’s painting and pizza party at NASCAR driver Ryan Newman’s Rescue Ranch in Statesville; Eldred said the two were “instant friends.” He said Mason loved that Blaney voiced a character in the Pixar movie “Cars 3” and that he has a hound dog, just like his.

Eldred said the event was amazing and that Mason stole the show on the runway.

“It was an experience we will remember our entire lives,” Eldred said.

Before Mason was officially diagnosed with cancer, Eldred said the couple knew something was wrong with their son. Mason would have sickly spells where his white blood cell count would spike with high fevers and seizures. The Eldreds — living in Boone — took the then 11/2 year-old boy to several doctors around the state when a test at Blue Ridge Pediatric and Adolescent Medicine in Boone discovered the cancer.

The next several years the Eldreds were traveling often to Brenner Children’s Hospital in Winston-Salem for Mason’s treatments. Wasting no time, doctors started Mason on a blood transfusion as well as started a chemotherapy plan the first day at the hospital. At points during Mason’s journey, Eldred said his wife was traveling to Winston-Salem with Mason two or three times a week. Toward the end of treatment, she was traveling to the hospital once every couple of weeks.

Eldred said the family’s faith in God and a parent’s love for their child is what kept them going. The Eldreds continued to have support from family as well as members of the Meat Camp and Todd communities. Eldred said the community would host fundraisers and people would help out with monetary donations or prepare food for the family.

“Sometimes people would say ‘All I can do is offer a prayer,’” Eldred said. “We would say, ‘That’s one of the best things you can offer; sometimes it’s better than money.’”

Even when times were difficult, Eldred said Mason remained resilient and continues to be a happy, easygoing kid. Mason’s attitude has changed the way Eldred and his wife now think about situations.

“While we complain about so many little things, this little guy is going through all of this and he doesn’t complain a bit,” Eldred said.

Mason loves Disney Pixar movies, cars, dinosaurs and is developing an interest in superheroes, according to his dad. He also loves spending time with his dog, named Sam. Eldred said they adopted Sam from a rescue shelter during the journey of Mason’s treatments as therapeutic relief for the entire family.

The Eldreds have three other children as well — ages 18, 17 and 11. The couple mentioned that their other children came together to purchase bracelets to sell with phrases such as “Mason strong” and “Pray for Mason.” Eldred said the children totaled up the money from bracelet sales and used the funds to buy Mason a sandbox.

Mason will return to Brenner Children’s Hospital once a month for the next year for follow up appointments. Now being at the end of Mason’s battle with leukemia, Eldred said it’s a huge weight lifted off of his heart and soul.

“People are like ‘You guys can finally get back to a normal life.’ We’re kind of just looking at each other like ‘What’s normal?’” Eldred said. “We don’t even remember what normal life is. It seems so long now and such a long journey that we’re trying to feel our way back into normal life.”

Copyright © 2018 by Mountain Times Publications. Digital or printed dissemination of this content without prior written consent is a violation of federal law and may be subject to legal action.