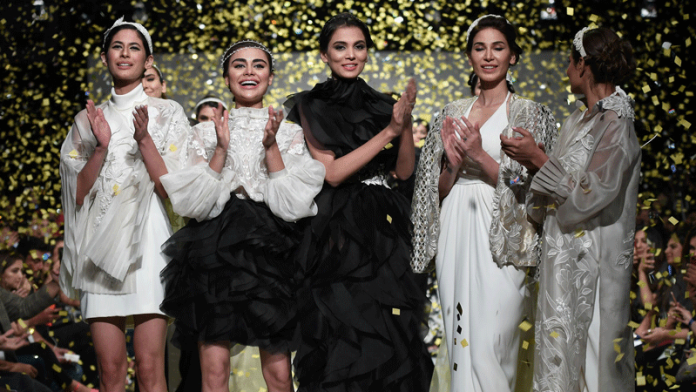 The fashion oscillated; up, down, high, low, freewheeling between the interesting and the mundane and often teetering right at the middle. Sitting through the eight designer collections, slotted for the second day of Fashion Pakistan week (FPW), my emotions varied accordingly; excited, interested, vaguely interested, not interested at all and finally, aghast at one particular collection.

There’s always that one particular collection, isn’t there? I hope that one day I attend fashion week and don’t feel the need to rant about maintaining standards and editing out a certain bad collection or two. It hasn’t happened yet. Ever.

But it would be unfair to judge FPW’s second day on the basis of one bumbling, fumbling collection. The designer lineup boasted some popular power players as well as promising new names. It’s just that, throughout, there was a feeling that there could have been – and should have been – more.

Generation’s ‘No Nonsense Nighat’ oozed attitude. She twirled her dupatta in her hand, wore sneakers and there were faux florals woven into her pigtail hair. There was an infectious devil-may-care vibe to this line and a sense of girl power which is now intrinsically Generation. This girl was no quailing wallflower and she opted to invent a style of her own.

The collection was desi but cool, a mix and match of print, texture and layers with plenty of bright dashes of color thrown in. And the great thing about Generation’s shows is what you see on the ramp invariably trickles down to affordable retail racks.

I enjoyed the cotton saris – especially one ebulliently splattered with polka dots – the carefree jumpsuits, the light jackets constructed from sheer cotton, and the shalwars that varied from voluminous dhotis to more simmered versions.

I did not enjoy the peplum tops which may be staples at Generation stores but have simply been seen far too many times. Also, I wonder how the sheer translucent shalwars will fare in retail’s conventional market.

The styling really worked for this collection. The models wore hand harnesses and round nose rings, with dupattas wound across the shoulder or folded across the chest, almost schoolgirl-like. But Generation has always had such a knack for innovation and I felt that it was missing in this collection. I have seen the brand do better.

The most standout pieces in Yasmin Zaman’s ‘Zeke’ were slinky silk gowns, tie-and-dyed in a gorgeous blend of emerald green, turquoise and beige. Tie-and-dye is such a classic and Yasmin’s take on it had hit written all over it. However, she will probably have to translate it into a wearable tunic to make it a hit seller.

The designer was very evidently thinking on the lines of a cruise collection, meant for a destination wedding. The gowns and shift dresses were sleek, played up with draping and minimal embroideries, classy but very evidently targeting a limited market. Gowns are rarely worn in Pakistan and our designers may try to cut a neat silhouette but they can’t claim to be pros at them. The lehnga and the shalwar just comes to them more naturally.

A pretty collection – but not a memorable one.

Hooded owl eyes peered from Nauman Arfeen’s denim and cotton lineup and the quirkiness added a sliver of fun to the clothes. But it was merely a sliver. Nauman Arfeen is great with Eastern formals and I remember some of his more sophisticated collections dominated by cotton kurtas and sedate sherwanis. With ‘Har Shakht Pay Ullu Betha Hai’, he dabbled with younger elements and wasn’t as impactful.

There were separates that caught my eye; particularly a shalwar with an owl print and a fitted women’s jacket. There were others designs that didn’t work quite well like the sheer shalwars and kurtas. How does Nauman plan to bring these to retail? Or perhaps they were there just created for the catwalk?

The main issue with the collection, perhaps, was its theme. Owl inspirations have been done to death for ages now, plastered everywhere from clothes to jewelry to handbags. A less hackneyed statement would have worked well for the designer.

The Mughals, when they ruled over the subcontinent all those many years ago, didn’t know what a great favour they were doing to Pakistani fashion. Centuries later, Mughal inspirations remain a fixated element on our runway and I get the feeling that they will never ever leave. It’s a good thing that, despite being nothing new, they look invariably pretty; on shawls, wedding-wear, evening formals and, in the case of the Ideas by Gul Ahmed show at FPW, on pret for the high-street.

I am hoping that Ideas’ Mughal-inspired prints, merged with a few Victorian elements here and there, will become available at the brand’s many stores scattered across the country. In fact, there’s a lot that could make a splash in the local high-street, should the effort be made to bring it there: on-trend balloon sleeves with bejeweled cuffs at the end, ruffled peplum shirts and a very cool white sequined jacket worn by Zara Abid at the beginning of the show.

Were the clothes reminiscent of what has been seen on the runway before? Yes. But then again, Ideas caters to the high-street and their core identity lies in bringing high fashion trends down to more affordable, accessible realms. The focus, then, was on being trendy – it was not on being original.

Some of the savvier elements in the show should certainly come to stores. Ideas by Gul Ahmed is one of the oldest players in the high-street and wields immense clout. What it desperately needs, though, is a sense of identity. It would be great if the brand could consistently stick to one signature rather than a panoply of many different aesthetics. Perhaps distinctive collections very particularly following certain themes could be created more often?

Their FPW collection had potential, only if it translates to retail.

Yet another high-street heavyweight followed. Al-Karam’s collection boasted the name of the brand’s creative director Ather Hafeez, hitherto a member of Sana Safinaz’s high-street team and generally well-known for his well-honed artistic eye. This was Ather’s maiden show under the Al-Karam umbrella and he chalked a bright, punchy path on the runway.

Reflecting the work of artist Georgia O’Keeve, abstract prints were created and molded into a series of wearable, modern silhouettes: a fabulous range of jumpsuits, edgy oversized sleeves, pleated dresses, matching separates and occasional flourishes of three-dimensional florals wound about the neckline.

Very edgy, loads of fun – bring this to retail, Al-Karam!

I know that the Fashion Pakistan Council believes in being inclusive and giving chances. My question to the council is: how many chances are they planning to give to Obaid Sheikh?

The men wore see-through shirts and pants with glistening fringes dangling from them. There was a jacket in muted shades of green and red with reindeer peering out from it – perhaps a good sell for Christmas? There were also plenty of floral embroideries and a bodycon dress with a diaphanous trail attached to it worn by showstopper Azekah Daniel who also held a cage in her hands.

What can one say? Perhaps the less said the better?

Boheme by Kanwal, in its second ever fashion show, is well on its way to cementing a traditional identity for itself. The designer worked on a predominantly muted palette of whites and bieges, creating pretty angarkhas, ethnic cotton ghararas and putting together a medley of tukri, gota, dainty floral embroideries and machine-embellished Mughal scenes. Like I said earlier, Mughal inspirations are never, ever going to go away.

The hero of the show had to be the gharara worn by Sanam Saeed, set off by a brightly bordered, voluminous dupatta, splayed out over the shoulder for maximum effect.

It was an aesthetically pleasing show but it is important that the designer innovates the next time she steps out for fashion week. Kanwal needs to more than make conventionally pretty clothes. I’d love to see her really push boundaries next time, while staying true to her ethos.

Sania Maskatiya’s signature rang out loud and clear in the very well-finished, cohesive lineup that she had only recently showcased at New York Fashion Week. There was a technical expertise to the way the ruffles fell in place on a monochrome gown, cinched by an embroidered belt or to the impeccably crafted cutwork on a sleek halter and a statement jacket. There were single tone white-on-white embroideries and diaphanous organza tops, with embellished cuffs or collars.

It was a modern line that may have been created with the New York audience in mind but would appeal to aficionados anywhere. It also defined the evolution of Sania Maskatiya as she matures and becomes more individualistic as a designer. An elegant, high- fashion end to the second day of fashion week.