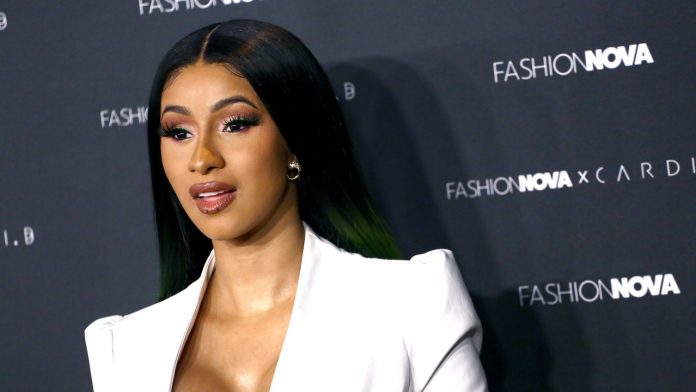 As a woman who owns a Birkin in every shade and loves to show them off, it should come as no surprise that the “WAP” rapper now wants to share her passion for luxury purses with her daughter — even if the toddler doesn’t have anything to carry around in all those high-end handbags just yet. On Tuesday, Cardi shared a handful of photos of Kulture wearing a Minnie Mouse-themed diamond necklace she bought her for her birthday, a blinged-out watch, and stack of diamond bracelets, while sitting next to her new pastel yellow Birkin bag that’s covered in a rainbow made out of thousands of Swarovski crystals.

While her child’s new bag may have cost the Grammy winner as much as an SUV, the CEO of Privé Porter, Michelle Berk, told Page Six that the inspiration behind the custom gift came straight out of their local mall. “Cardi and Kulture were at Claire’s, of all places. Kulture saw a small bag with a rainbow and started begging for it,” Berk explained. “In typical Cardi way, she didn’t get that bag, but she called me instead to try to replicate that rainbow on a Birkin for Kulture.” The pair then went back and forth for weeks perfecting the design, which required 100 hours of work to place over 30,000 crystals in various sizes and colors. Berk went on to point out that “The Birkin is getting so big — so many women are finally getting one — that our biggest collectors are coming to us to create something that no one else has. It’s that simple.”

This custom rainbow bag is actually Kulture’s second Birkin. She received her first—a small, pink style— from her dad, Migos rapper Offset, for her second birthday. Cardi responded to critiques of her child’s lavish new gift on Instagram, saying, “When celebrities buy their kids jewelry and designer shit, people be like, ‘Kids don’t care about that. They only care about toys and candy.’ Yeah, kids only care about toys and candy, but the thing is, the kids also go outside. You know what I’m saying? Kids go to restaurants, kids go to fancy places, celebrity kids, they go do red carpets. And if I’m fly and daddy’s fly, then so is the kid. If I was looking like a bad bitch, expensive bitch, and I had my kid looking like a bum-bum, then y’all would talk shit. So I’m not mad that daddy bought baby a Birkin. She going to match mommy.”

— Behind the Scenes of Anthony Bourdain’s Iconic Nude Portrait
— Will TikTok Save the Olympics?
— King Edward VIII, King George VI, and the Rift That Changed History
— New Summer Books for Every Mood
— Jeff Bezos and the Life-Changing Magic of Going to Space
— The Best Next-Gen Face Toners for Balanced Skin
— Jared and Ivanka Have Reportedly Closed on Billionaire Bunker Mansion 2.0
— The Rehabilitation of Prince Edward and Sophie
— From the Archive: How John Kennedy Gracefully Took His Place in History
— Sign up for The Buyline to receive a curated list of fashion, books, and beauty buys in one weekly newsletter.

These are the queer icons shaping fashion

A Timeless History of the Swatch Watch