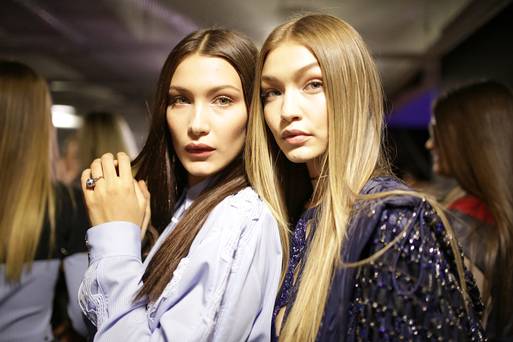 The American style bible hyped up the Hadids’ new literary prowess, noting that both have been pictured touting around their new reads in recent weeks, with Bella in particular, weaponising her copy of Stephen King’s The Outsider to defend her image from the paparazzi outside Charles de Gaulle airport. Four weeks after Paris Fashion Week has wrapped, she is still getting through the 560-page thriller.

Vogue is sending an important message by not-so-subtlely reminding its digital readers of the pleasures of flicking through the pages of a physical book, while simultaneously hyping up two of the biggest names in fashion. It’s silly, but effective. The New York Post, on the other hand, was roasted on Twitter on Wednesday night for its ghastly headline, “Bella and Gigi Hadid make books the hot new accessory of 2019.”

It’s still unclear if the story was written in jest or not, but it’s impossible to take seriously. They note that Gigi has been carrying a copy of Albert Camus’ The Stranger, a novel first published in 1942 by the French author which informed his existentialist philosophy and a book which, in 2012, The Guardian described as a “masterpiece”, for several weeks now.

“And like true supermodels, the gals know how to coordinate their outfits to their new brainy accessories,” the Post writes.

It goes without saying that deeming books ‘brainy accessories’ is a summation of the idiocracy we find ourselves leaning towards, but let’s not forget that the Hadids don’t do anything for free – even read. And the fact that this is a coordinated effort evokes even more suspicion. So, this is either phase one of some kind of book club commercial strategy, or the Hadids just learned the joy of books and want to influence others on Instagram in the same way they’ve spearheaded the tiny sunglasses campaign with such vigour.

The Law Of Attraction And Your Life’s Purpose

I Want To Be The Internet Marketer!

LVMH Is Stellar, the Rest Still Have to Prove It

What Online Gifts Have Come To Mean To The Shopper

Survive The Gas-Pump Squeeze With Have Trouble

Need An Offshore Sales Office In The Tax Free Environment?