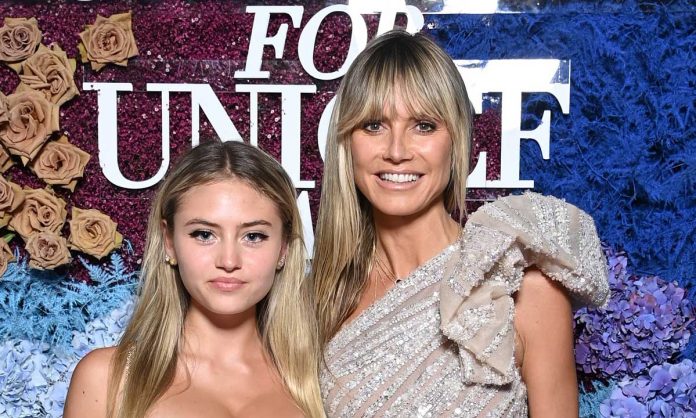 America’s Got Talent star Heidi Klum turned heads on Saturday as she donned a stunning thigh-split gown alongside her lookalike daughter Leni at a charity gala in Capri.


America’s Got Talent star Heidi Klum caused a serious stir on social media as she dazzled in a glittering ball gown at the LuisaViaRoma for Unicef charity gala in Capri on Saturday.

Taking to Instagram to share several photos of her jaw-dropping look, the German-American model was the picture of elegance in a sequinned Elie Saab number, twinning with her lookalike daughter who also sported a dazzling golden ball gown.

Turning heads with a daring thigh split, several layers of sheer sparkling mesh and a statement one-shouldered design, the 48-year-old was a vision on the lilac carpet as she worked all angles for the camera at the star-studded event.

The blonde beauty wore her signature long locks down and styled poker straight, styling her chic bangs to fall just beneath her eyebrows. Pairing her iconic look with a glowy makeup ensemble, the elegant star looked radiant with a subtle smokey eye and classic nude lip. Heidi was joined at the event by her daughter Leni, who is also a budding model. The 17-year-old cover girl followed in her mother’s fashion footsteps for the event and opted for a stunning sequinned gold dress by Versace.

Twinning with her mother, the stunning teenager also wore her blonde locks down and completed her gala look with a pair of sparkling stud earrings.

Although Heidi limited the comments on her Instagram posts, it’s clear to see her dazzling look was a serious hit with fans, who collectively left hundreds of thousands of ‘likes’ on the AGT judge’s page. Heidi shared the hilarious moment with her daughter on Instagram

Our favourite mother-daughter moment from the evening was a snap shared to the model’s Instagram, which showed her posing alongside daughter Leni with their feet up. The duo were forced to ditch their heels following a night of dancing, leaving the pair with some seriously dirty toes – gotta keep it real!

“Showing we had fun… without saying we had fun [laughing emoji]”, penned Heidi, who wasn’t afraid to show the candid moments from her glamorous evening of events.

From sweaters to scarves, cozy to chic

La’Shaunae vs fashion: the plus-size model on a mission to shake things up

Get Your Front Row Seat to Virtual Fashion Shows