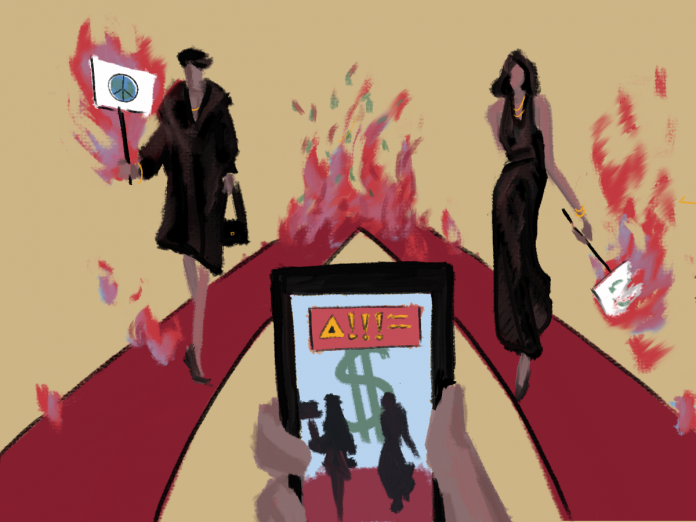 We’re stuck in a cycle of production and consumption, and we’re getting sick of it

Greenwashing strategies from the world’s best marketing agencies have successfully commodified the environmental justice movement. Our culture has a shopping addiction, and it’s going to kill us.

Even those of us that are self-aware about this fact can have a difficult time denying manufactured desires. We have been trained to collectively consume both media and products before we could think for ourselves. Can we really be blamed for finding it a hard habit to kick?

Capitalism pushes the belief that if we cannot consume, we should aim to produce. Our society doesn’t exactly place a great value on simply “being.” The 21st century has brought forth the first period in creative history in which artists are creating “content” rather than their own “art.” It’s created an insular experience that focuses on aesthetics and a culture of fashion “micro-trends” that develop at increasingly rapid rates. And it’s become more and more difficult to source clothing in order to keep up with these rapidly changing trends. It’s hard to tell if the emergence of fast fashion retailers like Shein are a response to the problem or the source of it. We could easily blame influencers, but under late-stage capitalism, I can’t really blame anyone for taking a shot at joining the ranks of celebrity, C-list or otherwise.

We are far too aware that there is a divide between economic classes, and with the democratization of media and a “produce or consume” mindset, it’s not surprising that more and more people are choosing to seek power by producing content in the hopes of attaining at least a modicum of fame. Celebrity, or at least influence, seems to be the go-to escape plan from the collective paralysis we feel about our climate.

What is it about our culture and celebrities? We are fascinated by them and appalled by their existence. They’re our inspiration and the evidence of our downfall. Celebrity is the aristocracy of the postmodern world. They represent something beyond the entertainment industry, the characters they play, or the stories they write. They represent the small part of the world’s most powerful population that is public to us. Rarely do they hide their material wealth because, unlike other members of the one per cent, they do not have the luxury of keeping their finances or their lives private. They are public figures, and to us, the dazzling glamour can make it difficult to recognize them as real people.

Our relationship to fame is one in which we transform individuals into God-like figures. This process has been democratized, and average citizens and politicians can often reach the ranks of the most famous elite. Alexandria Ocasio-Cortez is a unique example of this practice of glorification. AOC has done a lot of great work in the United States political system, but with that said, why was she at the Met Gala?

The relationship between political figures and celebrity status is a sore topic in the newly post-Trump world. Why risk violating the principles upon which you were elected just to join the ranks of the rich and famous? The Met Gala is an event designed for the most elite population in the fashion world, an industry that famously is one of the greatest drivers of climate change. Why align yourself with an industry that is exacerbating the effects of climate change, when you yourself are advocating for climate reform?

The thing is, the climate crisis we have spent our whole lives anticipating is here. It’s already happening, and we still cannot take concrete action to prevent it from getting worse. This really isn’t our fault, we were born into this mess, but our leaders don’t seem to be doing a great job either. We’re living in a state of paralysis, caught between the desire for the life we were promised and the reality facing us all.

The stability and wellbeing of our planet hinges upon either the embrace or abandoning of capitalism, therefore it shouldn’t come as a surprise that economic instability impacts our ability to advocate for better. Climate anxiety is our collective nihilism pushing us to take action, but we continually find ourselves with little we can do. Our collective hopelessness about systemic change has pushed us to a point of ecological nihilism.

Ecological nihilism is the acceptance of the climate crisis, and that it will be the beginning of a societal collapse. It’s the final sign that we have moved from paralysis and fear to complacency. It might feel like the end of the world, but if there’s still a chance; we can’t look to celebrities or fiction for solutions.

Last Friday, there was another climate march here in Montreal, which demonstrates that people are still coming together to demand change. Community organizers are not demanding impossible change, it is the failure of our government that refuses to take reasonable action to combat the violence of the climate crisis. We cannot depend on government approval to take action against climate change. The power remains with the people, and it isn’t time to give up yet.

How To Match Your Outfit To A Face Mask

Rethinking fashion: A photo series that makes you reflect on your relationship with clothes

How to master the season’s top eyewear trends