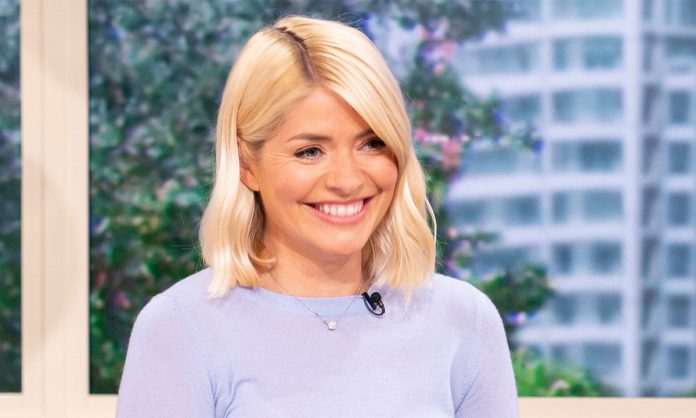 This Morning’s Holly Willoughby looked incredible on Thursday’s show wearing a white top which she teamed with a white and peach pleated skirt from high street store Reiss, which is priced at £155.

Holly Willoughby looked incredible on Thursday’s This Morning, rocking a seriously swanky pleated skirt from luxury high street store Reiss. Known as the ‘Aya’, the fresh and funky design was embossed with a painterly floral print in peach-and-cream hues. Priced at £155, it’s not the cheapest of items but like any separate, it can be worn in many different ways.  And we think it would be a fab look for Ascot – which starts next week! Holly, 38, chose to team the chic midi length number with a simple cream top from one of her favourite knitwear brands, Pure London. Holly’s fashion essential – obligatory nude high heels – were also present, giving her look a super classic edge. As always, Holly’s look was put together by the one and only Angie Smith – the only stylist she works with. Holly stuns in the skirt of dreams

Wednesday proved a super busy day for the mother-of-three. Not only did she have work in the morning as always, but she later had a delightful lunch at  MNKY HSE with Phil, and wore a very chic top in the process. Holly’s voluminous blouse had a retro, pussy-bow neckline and a galactic print, but sadly it can’t be purchased because it’s a past-season buy. Sad times! Holly last wore Reiss back in March, when she stunned viewers in a cool, retro print top from the brand, in camel tones. The top featured a zany print and had a cool royal connection as the Duchess of Sussex wore the dress version two weeks before her.

The wife of Prince Harry met with leading feminists and national figures to mark International Women’s Day on 8 March and looked incredible, wearing the 60s-style shift dress, but in the monochrome version. The fancy number was priced at £185 and she teamed it with a black blazer, bare legs and a pair of black suede court shoes. Great minds clearly think alike…

For You Page Fashion – The Miami Student