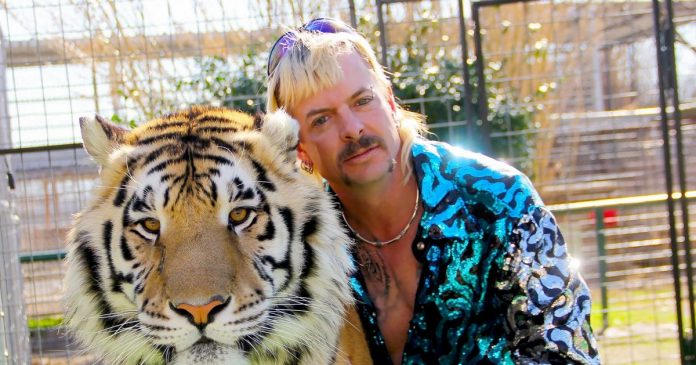 The infamous tiger handler, 57, who is currently serving a 22-year jail sentence, is believed to have hammered out the business details from his jail cell.

According to TMZ, fashion label owner Odain Watson asked Joe to partner with him on a limited collection for the brand Odaingerous.

A contract is “close to being signed” as the two parties agree on the final financial terms.

Odain appears to have confirmed the news on the brand’s social media page.

The clothing range, dubbed the ‘Revenge’ collection, will feature prints of Joe’s face as well as references from the Netflix mega-hit series.

One of the staple pieces from the collection is believed to be a print t-shirt that features a leather jacket decorated with tiger stripes.

Joe Exotic and the staff of GW Zoo in Oklahoma were propelled into the spotlight when Netflix released the bizarre Tiger King docuseries on March 20.

According to the streaming giant, over 64 million homes worldwide have tuned in to watch the shocking documentary series.

Full of twists and unusual turns, the documentary details the bitter feud between Joe and his his arch-nemesis Carole Baskin, and also sheds light on the United State’s harrowing big cat trade.

The tiger handler – whose real name is Joseph Maldonado-Passage – was eventually sentenced to 22 years in federal prison for a murder for hire plot, falsifying records and a number of animal abuse violations.

Joe has also developed somewhat of a unusual cult following after the series was aired.

Among other products that are now available, fans can buy Joe Exotic condoms and even animal print bikinis.

How Ralph Lauren built his $11b fashion empire

Dangerous TikTok beauty trends that can cause scarring, blindness or even cancer

What to expect from spring/summer 2021 fashion weeks