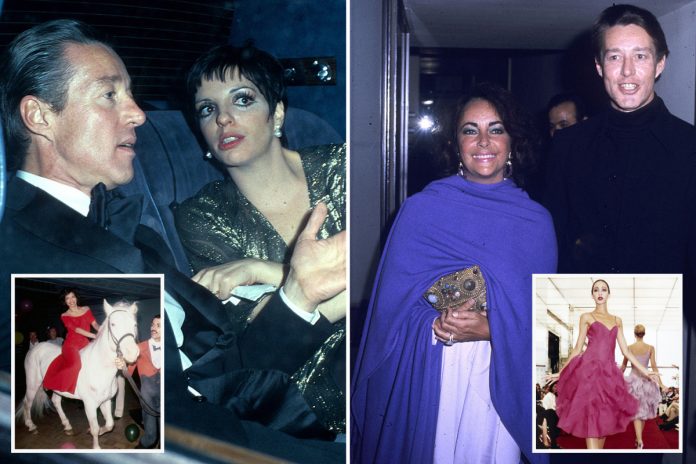 He was the most celebrated US designer of his era, with celebrity pals including Liza Minelli and Liz Taylor and a hotline to first lady Jackie Kennedy.

But Halston’s glittering fashion career ended in tragedy after his extravagant spending and cocaine addiction saw him lose his business in the years before he died of Aids, in 1990.

The rise and fall of the flamboyant designer is now the subject of the new Netflix drama, Halston, with Ewan McGregor in the lead role, which drops on Wednesday 14th May.

A regular at legendary New York club Studio 54 – where guests had sex on mattresses in the basement – Halston was also responsible for putting Bianca Jagger on a white horse to ride into the club.

He was known for his extravagance, spending £110,000 a year on orchids, and doling out cocaine to dinner party guests as “dessert”.

But he lost the right to design under his own name in 1984 and had just two loyal clients when he died at the age of 57.

Here we look at the rise and dramatic fall of the man Calvin Klein called the “greatest American fashion designer who ever lived”.

Raised in Iowa, the son of an alcoholic with an obsession for wealth, he began making hats at the age of seven, on his grandmother’s sewing machine.

After landing a job as a designer at New York’s Bergdorf Goodman department store in 1958, he later revealed the piece that made his name – Jackie Kennedy’s pillbox hat – had started out as a dome design.

“It was a rather windy day and she put her hand on the hat and it ended up to have a dent in it,” Halston told a reporter.

“So during all the ceremonies it had a dent in the hat, so everybody who copied it put a dent in it, which was so funny.”

After Jackie named him as her official designer, Halston broke away from Bergdorf and in 1968, launched his first collection in his own right.

His first customer was fashion icon Babe Paley – who he found sitting on his studio doorstep on the morning of his opening, demanding a made to measure trouser suit.

Three years later he was raking in £22m in sales – £313m in today’s money – and was the most sought after designer of the stars.

He designed an entire wardrobe to coordinate with Liz Taylor’s legendary gemstone collection and dressed Liza Minelli from head to toe for tours, boasting, “You are only as good as the people you dress.”

After selling his business to Norton Simon Inc for £8.2 million in 1973 – the equivalent of £100m today – he remained as the principal designer, creating high end clothes alongside uniforms for Braniff Airlines, the police, the Girl Scouts and America’s Olympic team.

Enjoying his celebrity status, Halston surrounded himself with a beautiful female entourage he called “the Halstonettes”.

“He draped us in diamonds and dressed us in silk and chiffon,” recalled model Pat Cleveland adding he was “always putting money in boxes and giving it to everyone.”

At night he entertained male prostitutes, who he would serve steak to as foreplay and, according to his biographer Stephen Gaines, once enjoyed a Moroccan sex show which featured bestiality.

His stunning two-storey flat at 101 East 63rd St – featuring a bamboo-filled greenhouse, double-height ceilings, roof terrace, sunken living room and catwalks – was the setting for his infamous celebrity parties, where cocaine was served as dessert and drunk or stoned guests frequently fell off the railless staircases.

Surrounded by orchids – strewn around his flat – the designer lived on baked potatoes with beluga caviar, chilled vodka and cocaine piled in Elsa Peretti silver ashtrays and consumed through silver straws.

“It was one of the most reckless, anything-goes moments in history. Being trash was venerated,” says Gaines. “The trashier you could be, the more you could get laid, the more drugs you could take.”

Halston met Venezuelan escort Victor Hugo in 1972 – a friend of pop artist Andy Warhol – and embarked on an on-off romance which lasted over 10 years and led to Hugo being employed as his window dresser.

After the nightclub Studio 54 opened, in 1977, the culture of excess exploded, with club owner Steve Rubell, dressed in drag, handing out Quaalude drugs and Halston indulging his increasing cocaine habit.

Liza Minelli was Halston’s most regular companion and club stalwart Bianca Jagger made history when, at his suggestion, she entered the club on a white steed at the birthday party the designer threw in her honour.

Halston’s drug habit got him into trouble with royalty on one occasion.

Journalist Taki recalls how Halston threw a dinner party at the Savoy and insisted on keeping hold of Steve Rubell’s cocaine stash to stop his friend overindulging.

When he couldn’t get Halston’s attention, Rubell crawled under the table and bit his leg – leading the designer to empty his glass of red wine into the lap of his neighbouring diner, Princess Margaret.

With Norton Simon Inc becoming increasingly frustrated at his coke-fuelled tantrums and inability to meet deadlines, in 1983 the company suggested he strike a deal with mass market chain JC Penney to broaden his market.

But the move meant upmarket outlets including Bergdorf, and high-end clients, abandoned his collections and moved to new designers.

In 1984, he was fired from his own company and lost the right to design and sell clothes under his own name.

Only his close friends, Liza Minelli and Martha Graham, continued to wear his designs.

In 1988, Halston was diagnosed with Aids, and he moved to San Francisco to be cared for by his family.

Once there, he splashed out for a final time on a £150,000 Rolls-Royce Corniche so he could be chauffeured around the redwood forests of northern California in style.

Watching Ewan McGregor taking on the role of the designer, author Andre Leon Talley, a former assistant to Andy Warhol and Studio 54 regular, was moved to tears.

HOL OF A SHOCK

Families and friends CAN hug from next week as lockdown lifted, Gove confirms

“He was like Cary Grant, one of the greatest talents, up there with Saint Laurent. He dressed Jackie Kennedy, Lee Radziwill, Lauren Bacall. Then he flew too close to the sun, the Icarus myth.”

Halston is released on Netflix on May 14

Where Were Plus-Size Models on Fall/Winter 2021 Runways?

Yes, You Can Play With Your Clothes