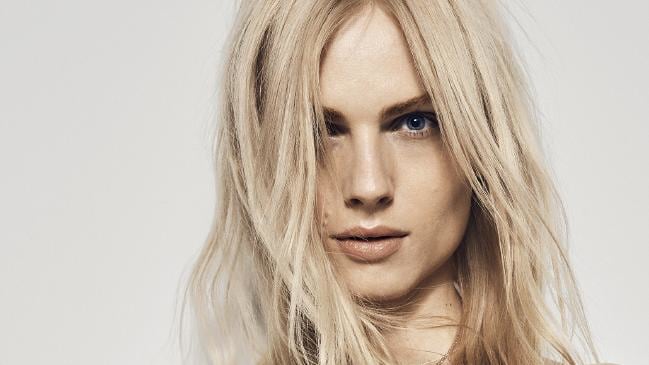 The first ever bra Andreja Pejic tried on was a Bonds bra — and never did she think that one day she would front one of its most popular campaigns.

“I am ‘Bonds girl’, it’s insane — it’s not that I grew up thinking I could ever be one,” Pejic told news.com.au from New York.

Pejic has gone on to make history by becoming the first transgender model to lead a Bonds lingerie campaign.

“It’s a beautiful campaign — I am just looking at the images now while we speak because I haven’t seen them yet — they are so nice with a diverse group of girls; it’s beautiful to see.”

The 27-year-old Bosnian-Australian model based herself in the United States seven years ago after being told she would not find work in the industry in Australia.

She was born in Tuzla in the former Yugoslavia and in 2000, her mother emigrated to Australia.

“I think I have had a very interesting career. I have been very lucky to travel the world and work with incredible people and brands,” she told news.com.au, adding, “I have proved myself beyond just being a ‘label’ and it’s nice to finally be recognised for my work.”

She said it was great to see more brands like Bonds starting to explore new ways of advertising creatively: “They’re beginning to look underneath the package,” Pejic said.

Her portfolio extends to some of the world’s most biggest and notable fashion labels from Jean Paul Gaultier to Marc Jacobs and Prabal Gurung.

Pejic has also been a cover girl for global editions of GQ, Elle, Marie Claire and Harper’s Bazaar and while she’s had great international success, it hasn’t always been so easy.

“The industry has shifted massively. When I started about six years ago it was completely different,” she told news.com.au.

“I am lucky with everything I got early on, but I did still feel like a bit of an alien.

“People were just like, ‘What the hell is this?’” Pejic said about her explosion onto the international scene after being featured in French Vogue.

Pejic’s journey to become a woman started at 13, before she underwent sex reassignment surgery in 2014.

She said, like a lot of young women, she had a complicated relationship with her body.

“It took a really long time to accept myself and be comfortable with what I saw in the mirror,” she said.

“Becoming a model doesn’t necessarily fix that, it makes it stronger because you’re more aware and there’s added pressure.

“It took time, I just started with being in my bra and panties and looking in the mirror and being more accepting with myself.”

Upon her transitioning to become a woman when she was 22 years old, she went on to become listed as a female model with all of her agencies around the world. Her agents at Chadwick were among the first to list her solely in the women’s division at the time.

She commended the brand for changing with the times and reflecting fashion today.

“Australia likes a more commercial beachy girl and I was just never going to fit into that commercial context so I think this shows times have changed for a company like this to hire me and give me this opportunity.”

“The fashion industry was starting to get a bit stale and boring — they had the ‘perfect’ ideal of a man and woman — but it is changing.”

On Bonds’ new underwear campaign Pejic described it as “sexy but still comfortable”.

“It’s for my generation who want something they can wear to work and then make out with someone later,” she said laughing.

Bonds marketing manager, Emily Small, said the campaign encapsulates Bonds’ ethos that “Bonds is for every Australian woman. Taking a strong and feminine stance on Intimates, All The Feels celebrates the real, raw, upfront beauty of the modern woman.”

“We think it’s important to challenge what we see in the media with a more authentic reflection of beauty and hope to grow people’s visual vocabulary.”

The Intimately Bonds collection Is available for purchase in-store and online at from March 6.

“It’s not an easy industry to survive and it definitely has not been for me,” she said when asked what advice she has for aspiring models. “You have got to know yourself and love yourself outside of (modelling) because once you start basing yourself on success or whether you’re the prettiest face in the room, it will start to affect your mental health.”

Pejic made her Hollywood film debut last year in The Girl In The Spider’s Web where she played Lisbeth Salander’s lesbian lover.

“I loved it. I really enjoy acting, it something I have been training for a few years now,” she said. “I am now prepping for my second movie which I can’t say what it is as filming hasn’t even started yet, but it will be based in Canada and Spain.”