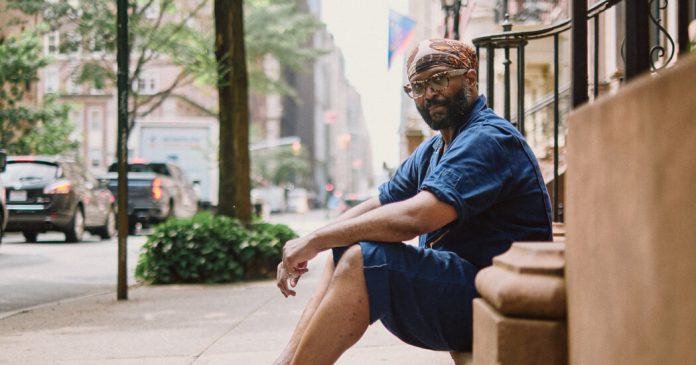 For the veteran fashion designer Byron Lars, who was named “rookie of the year” by Women’s Wear Daily in 1991, fashion moments never stop.

Inside an apparel factory in the Chinese city of Shenzhen, a rack of Byron Lars fashion merchandise caught the stylish eye of Xiaochong, a Chinese fashion entrepreneur who manufactures goods at the same factory. The contoured silhouettes with intricate seaming, embroidery and couture detailing looked deceptively more expensive than their retail price.

Months later in New York, she and Mr. Lars struck a deal for her Xiaochong Mizi Fashion Design e-tail site.

“I had never seen a designer like him,” Xiaochong recalled of their 2017 meeting. “I was confident I could sell a lot of merchandise.”

The savvy Xiaochong (which means “little bug”) sensed a fashion moment in the making. Her ever-present video crew captured candid shots of the bandanna-wearing Mr. Lars in China. In one post to her 2.6 million WeChat followers, Mr. Lars flashes his trademark smile as he fits a dress on a Chinese model, meticulously accounting for the anatomy and posture of Chinese women.

On March 16, 2018, at 10:02 a.m., two minutes after the Byron Lars x Xiaochong collection went live online, the 5,500 pieces — seven styles of dresses, skirts, blouses and jackets — sold out, Xiaochong confirmed. Eight minutes later, another 4,000 garments had been spoken for, prepaid to be delivered in June.

In less than a year, Xiaochong became Byron Lars’s biggest wholesale client. Chinese devotees of the designer shopped online during the Covid-19 lockdown.

“We counted on those orders to fill our factory to keep our business going this year,” Mr. Lars said.

At this moment of America’s racial reckoning, Mr. Lars, at 55, is marking three decades in business — and far too many fashion weeks, where Black historically was the color of invisible fashion designers.

An air of respectability has long dressed up fashion’s implicit white privilege. Wealthy socialites and elite magazine editors conferred the spoils on the designer darlings they created. They were fashion’s ultimate arbiters, who didn’t flinch when Calvin Klein and Miuccia Prada filled their runways with the palest, blond models, without as much as a token Black model.

Then along came the internet age, a time of democratization for the global fashion masses, empowered by social media, who turned the tables on the old guard. Today, amid the Black Lives Matter movement, a tidal wave of reconciliation and outreach is blanketing the fashion world.

“I view it with great skepticism,” Mr. Lars said. “As long as the protests are in the news, these moves toward Blacks will be a priority. But after that, I see a very sharp pivot in another direction.”

“I would love to be proven wrong,” he added.

Unlike many designer flameouts of his generation — white and Black — Mr. Lars is a hardy survivor who has often struggled to stay afloat as he shifted away from highhanded department stores whose reliance on markdowns and indifference to small vendors drove many designers out of business.

He has enjoyed some level of fame, if not riches. His Byron Lars Beauty Mark brand is a small but sturdy niche player, an under-the-radar resource selling to Lars devotees at upscale American boutiques like Joan Shepp in Philadelphia and Leigh’s in Grand Rapids, Mich.

Luck favored him, too, with timely collaborations with Mattel Inc., where he created Black Barbies for 14 years: 16 glamorous dolls in a range of skin colors, dripping in Byron Lars signature couture. The Byron Lars Barbies are among the most sought-after limited-edition Barbie dolls, treasured by collectors.

And in 2011, he teamed up with Anthropologie.com to score a digital success with an elegant $258 lace sheath dress called Carissima, which remains Anthropologie’s longest running hit, selling more than 60,000 units and still counting, according to an Anthropologie spokeswoman.

“We come from people who make silk purses out of sow’s ears,” Mr. Lars said, heeding the adage that many African-American families passed down to their children. “We don’t sit and stew about what we didn’t get. We pick ourselves up and keep moving.”

Mr. Lars lives a single life in a Manhattan rental, and his studio is a windowless basement in a nearby brownstone owned by SSG Fashions Ltd., his silent Chinese partner. For three months a year, Mr. Lars relocates to the Nan Feng factory in China to collaborate during 14-hour workdays with patternmakers and tailors who translate his complicated sketches into finished garments.

“Byron will take a nap in a bed he keeps under one of the fabric cutting tables,” said Monica Li, the factory’s liaison and English translator. Noah Chen, a local fashion photographer, spends days with him to create fantasy look books, dreamy scenarios on the International Space Station or atop the crown of the Statue of Liberty.

“The fashion magazines don’t cover us, so we make our own editorial,” Mr. Lars said.

A Fashion Designer Is Born

Growing up in El Cerrito, Calif., Mr. Lars took drafting classes for aspiring architects. But after making his own baggy pants, the enterprising 10th grader crafted a taffeta prom gown for a friend who paid him $300.

After high school and a stint at a design school, he moved to New York, transferring to the Fashion Institute of Technology, where he fast-tracked his way to design prizes in Paris, Milan and twice in Monte Carlo. Traveling abroad each time, he carried his portfolio in search of a job.

In the early 1990s in New York, Mr. Lars knew Black designers who found few career opportunities that would elevate them into positions with real authority — in an era when there were no significant Black retail buyers or store executives. He became close friends with another Black designer, Tracy Reese, as they set out to open their own fashion houses.

An expert patternmaker, Mr. Lars subsisted on freelance gigs until he was ready to go into business. The Byron Lars label took off with his 1991 debut collection, which was an edgy riff on a white shirt: six cotton shirts priced from $295 to $350 that he called “twisted American classics.”

Bloomingdale’s and Saks Fifth Avenue signed on, going so far as to pay 50 percent up front to get the merchandise made — and they built Byron Lars in-store shops. Every fashion week Mr. Lars staged themed runway shows that drove buzz, including “Metropolitan Heidi” in a cuckoo clock and “Futuristic Africa” decades before Wakanda.

At Saks Fifth Avenue, for example, Mr. Lars was often outselling contemporaries like Marc Jacobs and Michael Kors and Isaac Mizrahi, who were nonetheless the toast of Seventh Avenue, basking in fashion magazine covers and glossy lifestyle coverage, searing them into the public’s mind as fashion rock stars.

“Byron had more talent than all them combined,” Mara Urshel, the senior vice president in charge of women’s wear at Saks at the time, said in an interview.

When the Playing Field Isn’t Level

In 1997, the luxury goods giant LVMH went prospecting for talented young designers to revive its couture houses. There were no job postings or applications for these positions, but among the elite forces of fashion who weighed in was the mighty John Fairchild, the owner of Women’s Wear Daily, who wrote in his “Chic Savages” memoir: “I have always felt that if American designers were working in Europe, they could be better style leaders than anyone.”

It was no surprise to anyone when the hires turned out to be media darlings. Mr. Jacobs went to Louis Vuitton, Mr. Kors to Celine, along with two Britons, Alexander McQueen at Givenchy and John Galliano at Christian Dior. Those positions were the springboard that led each one to global success and personal fortune.

Mr. Lars was unaware of what was happening in Paris. Mary Ann Wheaton, the former president of Karl Lagerfeld who ran Byron Lars at the time, recalled: “If women in fashion came up against a glass ceiling, Black designers were hitting a brick wall. The tentacles of LVMH reached far, but they weren’t necessarily looking for pure talent. They were looking for designers who were being talked about, and Black designers weren’t being talked about.” (LVMH declined to comment.)

“Byron had the support of the stores,” Ms. Wheaton said. “They all respected him because his clothes sold, even before he had a financial backer. But we couldn’t get Vogue to come up to the showroom. He got mentions from time to time but no steady coverage like the others.”

Robert Burke, a fashion industry consultant, said: “Fashion in the 1990s and early aughts had a class and society element, and it was white. Designers would socialize with their clients, be with them in the Hamptons and escort them to parties. What counted was who were the boldfaced names who wore your clothes.”

Mr. Lars said he never bothered to think about being passed over. “I’m not so arrogant to believe that if I were white, my outcome would necessarily be otherwise,” he said. “But I look at white designers who get second and third chances, like Marc. Not to take anything away from him. He deserved his success. But they had the chances.

“It’s evident that the playing field isn’t level. It’s not that there was a lack of Black talent. It’s just that few of us have ever been seen. Something is amiss. By the law of averages, there should have been more Black designers up there than there have been. That’s all I will say.”

Mr. Lars checked all the right boxes to create Carissima, Anthropologie’s layered best seller. It is a clever feat of creativity, featuring lace and 13 different polyester fabrics, resulting in a luxurious cocktail dress that stands out on a cellphone screen. Mr. Lars tailored the sheath with a front panel, giving women up to size 22 an hourglass silhouette.

“It’s the perfect dress,” said Maggie Schuler, the executive fashion director at Anthropologie. Carissima tallied 682 customer reviews, with a near-perfect five-star rating from gushing fans, including brides and partygoers, who posted selfies with their reviews.

To achieve textured sheerness, Mr. Lars created a layered illusion he calls “egalitarian nude” to be flattering to every skin color.

“It’s not ‘Black girl nude’ or a ‘white girl nude,’” he said. “It’s a rosy hue covered with a taupe layer of net, so that the light doesn’t hit it directly. There’s a play of shadows that greens it out into an olive tone that is harmonious with every skin color — from white to brown. I played forever to get that nude right. Only a Black designer would go the extra mile. It always offended me to see Black women with a nude lining but only looked nude if you were fair and white.”

Mr. Lars’s tenacious, stay-relevant strategies over the years serve as a lesson to aspiring designers of any race, who can no longer rely on wholesale orders from the ever shrinking department store sector. The most resilient fashion houses of the future are likely to be small and specific — a throwback to when fashion designers were small, independent businesses whose loyal clients paid a fair price for beautiful clothes that made them look and feel special.

“He just may be the new template for how fashion is done, “ Mr. Burke said.