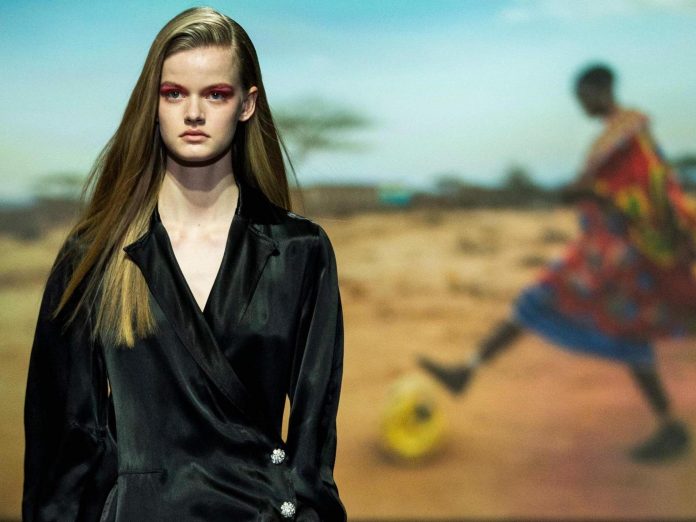 Ganni has been criticised over its latest runway show, with many describing it as “tone deaf” and “shameless exploitation”.

A multimillion-pound global business, Danish label Ganni is a firm favourite among some of the world’s most stylish women including Alexa Chung, Kendall Jenner, Alicia Vikander and Daisy Lowe.

But, while it might be the designer label that every girl on your Instagram feed is wearing, it seems Ganni is facing a backlash over its latest show.

On Friday, the brand presented its Autumn/Winter 2019 collection titled “Life on Earth” at Copenhagen Fashion Week, with a focus on the evolution of the #GanniGirl and the brand’s sustainable practices.

Models stormed the runway in colourful silk dresses, leather shirts and longline puffer jackets, promenading in front of giant screens that showcased the work of award-winning National Geographic photojournalist Ami Vitale, who travels to developing countries, such as India and Sri Lanka.

The images included snapshots of the desert, wild animals and cityscapes, but it was the ones of women that really struck a chord with some viewers.

Taking to Instagram, New York-based blogger Anaa Nadim Saber shared a lengthy post about the show, accusing Ganni of “fetishising underprivileged women in developing countries” and questioning what the photographs had to do with the theme of sustainability.

“The brand fetishised these women and used them as props and marketing tools. This was not a platform for these marginalised women to get representation; they were not treated as humans with agency and with stories of their own to tell,” Saber wrote.

“Instead, they are shown through the ‘white’ gaze, reduced only to their aesthetic value. It looked ‘cool’ in the background, right? It “gelled well” with the aesthetic of depicting the ‘human spirit’, right?

“Wrong. My people are not your aesthetic.”

Saber went on call for the fashion industry to build more diverse teams and stop using buzzwords like “diversity, inclusivity and sustainability” without actually promoting the causes.

“It is unlikely that the women in these photographs received any compensation for ‘participating’ in this show, while the brand profits,” she explained.

The blogger concluded her post by insisting she wasn’t calling out just Ganni, but the fashion industry at large.

“It is exactly women like the ones in these pictures that are worst affected by our industry: poor wages and terrible working conditions in sweatshops that manufacture clothing for many western brands,” she wrote.

“This treatment of women of colour is particularly painful given how ‘progressive’ the fashion industry claims to be.

“Stop being tone deaf and blind to your own internalised colonial mentality. Do better.”

Saber’s post has since been liked more than 2,000 times and received a flood of comments from people in agreement.

“So so so tired of seeing exploitation and profitisation off of POC from companies that have no relation to them and in reality don’t give two s***s about them,” one person wrote.

Another added: “This is just shameless exploitation of these marginalised women.”

While a third commented: “This concept is beyond problematic. An example of our culture picking and choosing when to be hyper sensitive and when to play the apathetic but fascinated voyeur.

“Too often, we as brown and black women end up the object of fascination rather than being viewed in our full, majestic humanity.”

Others have thanked Saber for speaking so candidly about a topic that’s often left undiscussed.

“So glad you spoke up about this. Topics like this don’t get much attention in the fashion industry and get brushed off. It’s refreshing to see you speak up and initiate change,” one person writes.

Another adds: “This is so upsetting. Thank u for talking about it!!! [sic]”

In light of the criticism, Ganni responded to Saber’s Instagram post with a direct message, saying: “We sourced hundred[s] of Ami’s acclaimed photographs to be a part of the show set design. The images were chosen were to reflect Ami’s body of work and how she is always living the stories she tells with her images and conveying with a positive message.

“Including her work on pandas and the last taken photograph of a white rhino. The images showcase all elements of nature from surreal beauty to the enduring power of the human spirit — capturing the energy of life in all forms.”

Speaking to The Independent, a spokesperson for the designer brand said: “At Ganni it is always our mission to celebrate women around the world. For the Ganni FW19 show, we drew inspiration from the beauty of life on earth and wanted to portray the diversity and connectivity we share on this planet.

“To illustrate this, we collaborated with photographer Ami Vitale on our set design. Ami has dedicated her life to documenting and amplifying stories of all forms of life.

“While well intentioned, we now understand the sensitivities we’ve broached by showing our collection within the context of these images.

“We sincerely apologise for this, as it was never our intention. We will learn from this mistake and we promise to turn your invaluable insight into action so that we can do better in the future.”