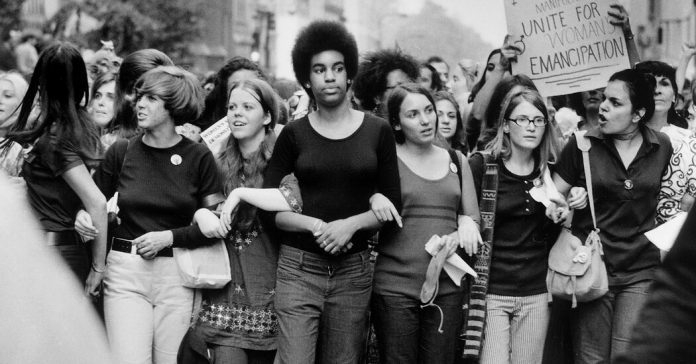 The 1970 Women’s Strike for Equality was the largest women’s rights demonstration since the era of suffrage — and more inclusive than anything that had been seen before. Fifty years to the day after suffragists secured the vote for American women, tens of thousands of women took to the streets of New York to commemorate this past success and to demand “the unfinished business of our equality.”

All women were invited, and many showed up. “Every kind of woman you ever see in New York was there,” The New York Times reported on Aug. 30, 1970. “Limping octogenarians, braless teenagers, Black Panther women, telephone operators, waitresses, Westchester matrons, fashion models, Puerto Rican factory workers, nurses in uniform, young mothers carrying babies on their backs.” There were even some men.

The evening of Aug. 26 was warm and windy, and Manhattan’s streets were filled. Crowds surged along Fifth Avenue, with people toting signs and chanting. Marchers had a permit but disregarded the city’s order to stay in a single traffic lane. They spilled over barricades, tangling up traffic and disrupting business as usual. Too many of them had been trapped indoors for too long. It was time to be outside, together, in public.

Betty Friedan, the author of “The Feminine Mystique” and a co-founder of the National Organization for Women (NOW), was unusually open to a younger, often angrier generation. Her book might have narrowly focused on white housewives, but as an organizer, she was eager to build coalitions with working-class women and women of color. She collaborated closely with the lawyer and activist Pauli Murray, the first Black student to earn a juris doctorate degree from Yale Law School; together, they developed the idea for NOW. When NOW elected its first slate of officers, the Black union organizer Aileen Hernandez was elected executive vice president, and she later served as president of the organization.

Friedan, then 49, was likewise open to the self-styled “radical feminists,” young women, many of them white, who believed that society needed a total overhaul. Everything had to change, from federal policies to personal habits: no more bras, no more natural childbirth, no more sex with men.

While “traditional” women’s organizations, such as the Daughters of the American Revolution and the League of Women Voters, denounced the young militants (“so many of them are just so unattractive”), Friedan wanted to forge an alliance with her younger counterparts. She knew who could help her build a mass movement, and it was not the Junior League. Instead, she focused on the radical feminist cells — New York Feminists, Redstockings — that were springing up all over New York.

When it came to second-wave feminism’s coming-out party, these radical women were on the guest list. They would link arms with Black feminists, immigrants, socialists and well-to-do white housewives.

The midtown march was part of a day of decentralized actions. In many major American cities, there were events, from “baby-ins,” which protested the lack of affordable child care, to mock garden parties and teach-ins about welfare and unions. These actions were in the service of three main demands: free abortion on demand in every state; free, 24-hour, community-run child-care centers; and equal opportunity in education and employment.

Though she called it a strike, Friedan had always intended the event to be a symbolic act, not a true labor action. She hoped women would stop doing traditional feminine work — both paid and unpaid — for one day, but what she really wanted was to make women’s liberation visible. Rather than “cooking dinner or making love,” women would rally in public squares and “occupy for the night the political decision-making arena.” Out of the bedroom and into the streets.

The strike demonstrated “the awesome political power of 53 percent of the population,” she said. But it was hard to get members of this “oppressed majority” on the same page. Socialist feminists had little time for the professionalism and politicking of NOW. And many lesbians felt marginalized within the movement, since Friedan had recently called them a “lavender menace.” But they showed up in force anyway. At an evening rally in Bryant Park, a member of the Radical Lesbians described the police brutality that lesbians faced. “We’re your sisters and we need your help!” she pleaded.

Black women, whose experiences of oppression have historically been diminished or dismissed by white feminists, arrived at the New York march with acute and utterly different concerns. Organizers of the Third World Women’s Alliance (T.W.W.A.) carried a banner demanding “Hands Off Angela Davis,” the Black activist who had recently been arrested. As Frances Beal, a T.W.W.A. leader, remembered it, a leader of NOW confronted her group and told them, “Angela Davis has nothing to do with women’s liberation.” Beal disagreed, saying, “It has nothing to do with the kind of liberation you’re talking about, but it has everything to do with the kind of liberation we’re talking about.”

Today, when so much political discussion happens online, and “blocking” someone requires only the flick of a finger, it can be hard to imagine such politically divergent groups making common cause. Then, the stakes felt high enough — and change felt close enough — that all kinds of women joined forces and walked together in the same direction. There were anywhere from 10,000 and 50,000 participants in New York City alone. Five thousand women gathered on Boston Common, 2,000 in San Francisco’s Union Square, 1,000 in Washington, another 1,000 in Los Angeles and hundreds more in cities like Baltimore, Seattle and Dayton, Ohio. Such a massive demonstration for women’s rights wouldn’t be seen again until the 2017 Women’s Marches, judged to be the largest demonstration in U.S. history.

As women marched, hecklers — mostly men, some wearing brassieres mockingly — stood on the sidelines, throwing pennies and jeering, “You look pretty good for being oppressed!” Two women’s groups, Men Our Master’s (MOM) and the Pussy-Cat League, Inc. (slogan: “Purr, Baby, Purr”) also held their own counterprotests. But for many women, Aug. 26, 1970, was just a normal day full of errands and chores. “We’re busy squeezing tomatoes like we do every day,” said one shopper, flanked by her three children.

The day ended at 8 p.m. in Bryant Park, with a series of speeches. Friedan thanked God that she was born a woman. The future congresswoman Bella Abzug drew cheers when she reiterated the day’s three core demands. Eleanor Holmes Norton, chair of the city’s Commission on Human Rights, demanded that the Senate pass the Equal Rights Amendment (E.R.A.). Kate Millett, who earned her Ph.D. at Columbia University in New York and was the author of the best-selling book “Sexual Politics,” surveyed the women before her. “You’re beautiful — I love you,” she said. “At last we have a movement.”

In the weeks after the strike, NOW’s membership increased by 50 percent, and a CBS News poll found that four out of five people had read or heard about women’s liberation. In 1972, Title IX passed, guaranteeing equality in education. In 1973, the Supreme Court ruled in Roe v. Wade that women had the constitutional right to access abortion services without excessive government interference. But just one year after the strike, President Richard Nixon crushed one of the movement’s major goals by vetoing a national child care bill, warning that it would amount to “a long leap into the dark for the United States government and the American people.”

Today, the gender pay gap has narrowed, and according to a Pew Research Center poll, 61 percent of American women think the term “feminist” describes them well. Yet 45 percent of this same group think feminism is not inclusive.

That was exactly the issue that Friedan had in mind when planning 1970 Women’s Strike, insisting that the action be for all women, including and especially for groups “whose style, origins, structure and general ambience might be quite different from ours.”