“The Cannes red carpet has a built-in sense of drama so we didn’t need to go for an overly dramatic gown,” Schifman says.

The 72nd edition of the Cannes Film Festival may be over (it ran from May 14-25 this year), but we’re still talking about the festival’s red carpet fashion. This year, the festival played host to one of the most exceptional and memorable red carpets not only in the history of the film festival — which has become renowned for noteworthy fashion moments — but in the history of all red carpet events. From Selena Gomez in Louis Vuitton to Elle Fanning in Gucci it was a red carpet to remember.

Actress and model Camila Morrone, 21, attended the festival with her boyfriend of over a year, Oscar-winning actor Leonardo DiCaprio, 44, stepping out on the Cannes red carpet in two striking looks; a strapless cream Miu Miu dress with feathered detailing for the premiere of DiCaprio’s Once Upon a Time In Hollywood, and a metallic floor-length Miu Miu gown with a plunging neckline and pink bow for the premiere of Les plus belles années d’une vie. Morrone also attended the Once Upon a Time in Hollywood after party in an eye-catching red dress which continued the feathered detailing theme from earlier in the day. 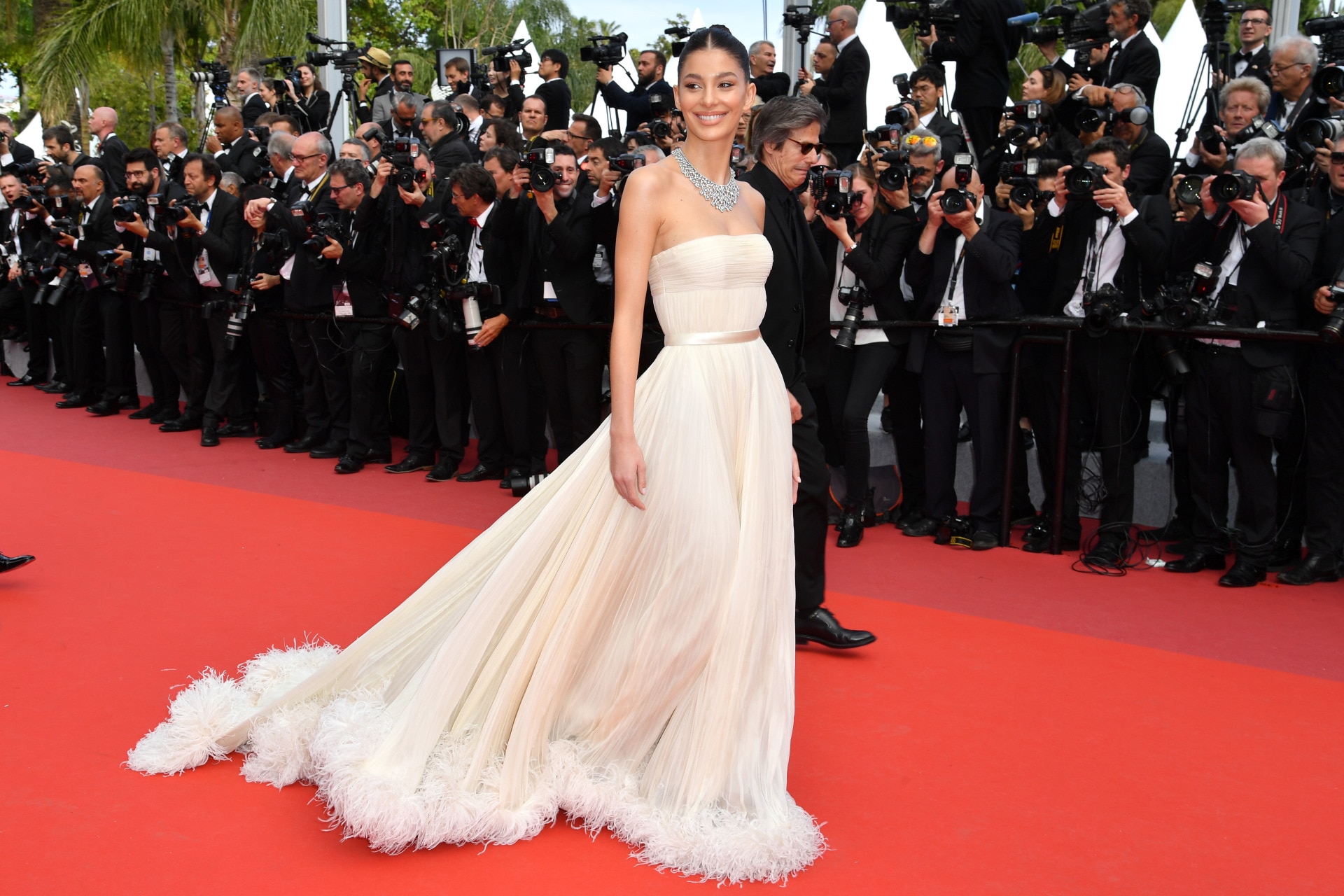 Camila Morrone attends the screening of Once Upon A Time In Hollywood at the Cannes Film Festival, 2019. Image credit: Getty Images

What was the inspiration behind Morrone’s Cannes looks?

“We wanted to keep it simple, yet glamorous. The Cannes red carpet has a built-in sense of drama so we didn’t need to go for an overly dramatic gown. The colour and silhouette were perfectly feminine and powerful at the same time [for the cream Miu Miu dress]. The feathers at the bottom of the gown gave the illusion that she was almost floating just above the carpet. For her after party look, I thought the feathers [on the red dress] continued the story from earlier in the evening.” 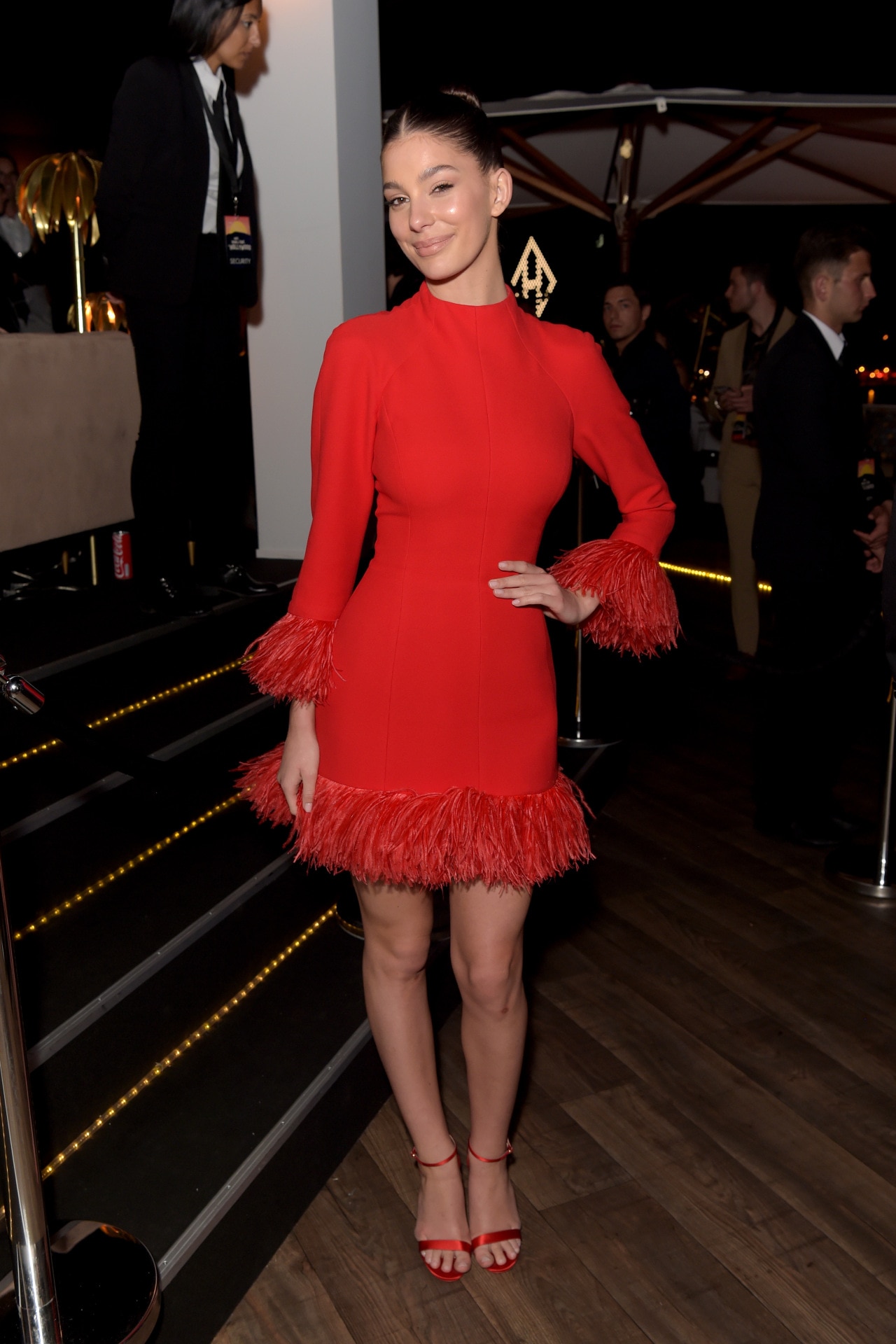 Camila Morrone at the Once Upon A Time In Hollywood after party, 2019 in Cannes, France. Image credit: Getty Images

“Both [Morrone’s red carpet] dresses were custom Miu Miu with Bulgari jewelry. We paired the dresses with Miu Miu shoes too.”

“We fell in love with the [metallic Miu Miu] dress because of its Art Deco feel. The rose gold and silver paillettes were such a strong material that juxtaposed beautifully with the softness of the pink bow at the waist. The detailing on the dress was just the right amount of bold, yet tasteful.”

“The second Miu Miu gown was also love at first sight. It reminded us of something Ginger Rogers might have worn as she glided across a dance floor. Camila looked as if she was floating just above the red carpet.”

Had you worked with Morrone before Cannes?

“Camila and I began working together about eight months ago. Our first event together was the LACMA event in Los Angeles. We worked so well together, and shared very similar aesthetics.”

When styling a client for an event, what would you say is the key element to pulling a look together?

“The first thing I consider when dressing a client for an event is the event itself. Is it a premiere? A charity event? A press screening?  You never want your client feeling over or under dressed. For film premieres, I love dressing my client a bit differently than what their character in the film would wear. For instance, if the film role is an unglamorous one, I like to up the glam factor. I find it fun to show that the actress can bounce between sartorial genres effortlessly.”

What’s your pro-tip for keeping a gown looking impeccable?

“Steamers are a stylist’s most important tool!”