Home Models La’Shaunae vs fashion: the plus-size model on a mission to shake things... 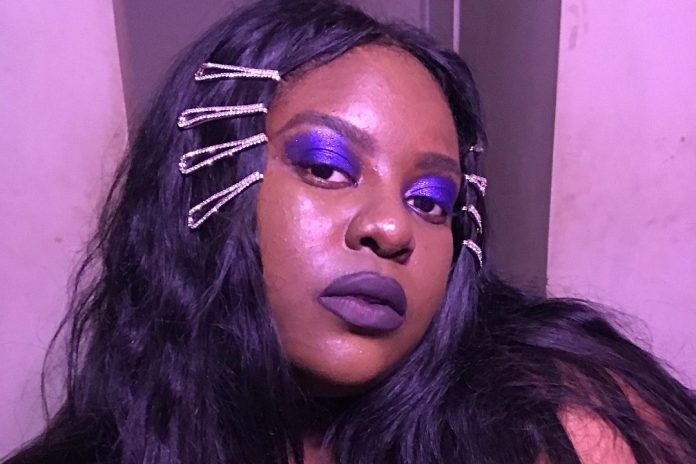 The 2019 Dazed 100 winner discusses her relationship with her body, taking on the industry, and why she really, really, wants a Vivienne Westwood corset

Where previously we’ve seen established stars like boundary-breaking K-pop icon Holland and Stranger Things’ Finn Wolfhard take the top spot on the Dazed 100, this year was a little different. Opening up the nomination process to our readers for the first time, we were overwhelmed by the response – as thousands of you began @ing us with the names of the people exciting, entertaining, and inspiring you in 2019.

Pretty quickly we realised one name was coming up a lot: La’Shaunae Steward. Over the course of the last few years, the South Carolina born-and-raised plus-size model has been tirelessly carving out a niche for herself on Instagram as a face (and personality) to watch. Using the platform not only as a place to post selfies and ‘fit pics, Steward regularly opens up on issues including body image, eating disorders, mental health, and fashion’s ongoing preoccupation with stick thin white models that typify the West’s archaic ideas surrounding beauty.

As well as taking the time to engage in conversations with her followers on the daily (“they push me and encourage me to continue what I’m doing”), Steward has appeared in campaigns for Universal Standard, collaborated with Jeffrey Campbell on a collection of wide-fit shoes, and appeared in a number of editorial shoots – but still, despite the fact they should pretty much be fighting each other on her doorstep, no model agencies have come knocking.

“I want fashion to change, and I want to be the person that changes things. I wanna be in Dior and Westwood already!” – La’Shaunae Steward

“I want fashion to change, and I want to be the person that changes things!” she says passionately over the phone when we speak just a few days after she was declared our 2019 winner. “I want to be on magazine covers, I want to see my fat black model friends on magazine covers. I want us in high-end, high fashion campaigns and shoots and editorials, and I want the world’s biggest, most incredible brands to finally wake up and realise we matter and that we deserve their beautiful clothes. I wanna be in Dior and Westwood already!”

With Steward showing no signs of slowing down when it comes to instigating the change she wants to see in the fashion industry and the world at large, and a close-knit community willing to back her all the way, we think it’s safe for you to trust us when we say: you’re going to be seeing a lot more of her. Here, we get to know the outspoken model a little bit better as she talks what winning the Dazed 100 means to her and where she’s going from here.

First of all, we want to say a huge congratulations on your win! It feels like a really momentous moment. What was your reaction when you heard?

La’Shaunae Steward: I’m like a really sensitive person, so I just went into my mom’s room and started crying actually (laughs).

How do you feel now – has it had time to sink in?

La’Shaunae Steward: Yes! I’m really happy because I’ve been trying so hard for a really long time to have my voice heard in this industry and I feel like this is another step towards the people in it actually sitting up and paying attention to what I have to say.

What did you do to celebrate?

La’Shaunae Steward: Actually I was on my Twitter a few days before voting was over and I was like ‘If I win this I’m gonna take myself on a date’, so that’s what I did – I took myself off to the movies to see Annabelle.

You talk a lot about how you would love to see yourself and other fat black women like you on the covers of magazines. If you were to reinterpret one from Dazed’s archives with you as the star, which one would it be?

La’Shaunae Steward: I’m going to have to say the one from a couple of years ago featuring Rihanna. She’s pretty much always been my style inspiration and I just love her as a person. Because I’m plus-size and, like, not an international star, I don’t have the high-end options she has but I’m always trying reinvent her looks and put my own spin on them.

What’s going inside your issue?

La’Shaunae Steward: Well, if she’s not on the cover with me, which I would love, I’ve always said I’d choose Chloë Sevigny. I love her, she’s just so cool. Inside would be a big feature on Lizzo. Actually maybe bring her on to the cover with us too (laughs).

You talk a lot about how you want the fashion industry to change. In what ways do you want to see that happen?

La’Shaunae Steward: For a start, I want so badly to see more (US) size 18 and up plus-size models on the runways and across the industry. Right now, I just don’t know or don’t see any other girls like me and I think there should be. They’re out there waiting to be signed and booked and not just used as the token fat girl in the shoot to fake being inclusive. I just want us to be included in the narrative, basically.

When did you first get into fashion? Was there a particular moment or designer that sparked your interest?

La’Shaunae Steward: I’m not sure exactly. Even from being really young I wanted to be a designer – but there was no particular person I looked up to anything. I guess it had a lot to do with the fact I’ve always been a bigger girl and I never had the same options as my friends and classmates. I suppose I thought I’d design things to cater for myself and women like me.

Would you maybe like to go into design eventually then?

La’Shaunae Steward: For sure! Any designers looking to collaborate, hit me up!

“I want so badly to see more (US) size 18 and up plus-size models on the runways and across the industry. Right now, I just don’t know or don’t see any other girls like me and I think there should be” – La’Shaunae Steward

It makes sense – just like modelling there needs to be plus-size representatives designing within fashion too. So say you were designing your first collection right now: what’s the inspiration behind it?

La’Shaunae Steward: Inspiration-wise I’m not sure – I just know there would be a lot of vinyl and a lot of clothes with fur trims. I’m obsessed with fur trims right now! Aside from that, I love mixing patterns and textures. I have so many ideas of what I could create, I just haven’t had the chance to yet.

If you could have walked in any runway show in fashion history, which would it be?

La’Shaunae Steward: Definitely one of Vivienne Westwood’s shows! She’s one designer that I really, really wish had things in larger sizes. I have a lot of friends that have her corsets and I’m always so jealous because I know I’ll never be able to get one in my size.

La’Shaunae Steward: Well, I already mentioned Lizzo but I’d have to say her again – she’s been the only visible person I can relate to in any type of industry. Other than that I don’t see a lot of representation, so it’s sometimes hard for me to connect with people, you know?

How has it felt seeing Lizzo really thrive in the last year or so?

La’Shaunae Steward: It’s been amazing! It’s been really, really nice for me and a lot of other young, fat, black girls to see someone like her prospering so much because seriously – to see that she’s still being unapologetically herself while being bigger and experiencing the hate that people throw at her is so important. It’s major.

How would you describe your relationship with your body?

La’Shaunae Steward: I’ve battled with so many different things when it comes to my body. I’ve overcome eating disorders, trauma that came from bad experiences with toxic men, and being bullied in school and, more recently, on the internet. Right now, the most important thing to me is taking care of my body, so I’ve been doing a lot of self-care, ignoring any negativity and hateful comments. I’ve figured out that you have to step away from that stuff in order to see yourself as the person that you truly are as opposed to the ways other people will try to make you feel. I’ve stopped being so hard on myself, basically, and I’m trying to show my body love.

Do you feel like you might end up becoming a bit of a role model? And if so, would you be comfortable with this?

La’Shaunae Steward: I’m not sure. You know, I don’t always look in the mirror and think ‘I look good!’ or feel positive about what I see in front of me. I’m not always going to be able to be happy with things and I still sometimes get depressed. But I try to be very open about the things I struggle with within the industry and my personal life, so I hope that will inspire people. But that said, I don’t know about the term role model because I don’t wait to accept that and then disappoint anyone when I can’t always be a certain way.

What are your thoughts on the body-positivity movement and the way it’s starting to be co-opted by slim girls who – despite any insecurities they may have – epitomise society’s existing beauty ideals?

La’Shaunae Steward: I don’t think being insecure about your body only comes from being plus-size, but one thing I was recently discussing with a friend was how certain girls who are considered curve models get all these jobs and bookings and promote body positivity, and yet they’re not standing up for those models that are bigger than they are. They see us and they hear all of our struggles and know how underrepresented we are, but they refuse to stand up and help another girl and I think it’s really sad. And then there are the brands that constantly call themselves inclusive that never have a girl who’s bigger than a (US) 14 in their campaigns and calling them inclusive. That’s not inclusive! I think the body positivity movement of course can include everyone, but until it does I don’t think it’s truly a ‘movement’. There’s a long way to go, but we’re gonna get there.