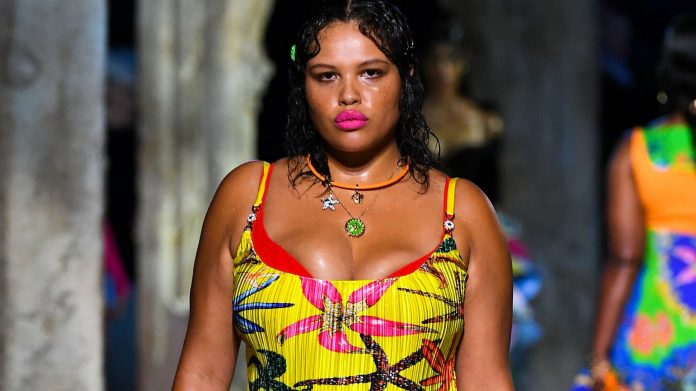 “I was always fascinated by fashion, but felt like an outsider looking in,” says 28-year-old Alva Claire about her relationship with modelling and the industry. “It was like my nose was pushed up against the glass.”

No longer on the outside, the Jamaican-American model — who was born in London and is based in New York — had a stellar spring/summer 2021 season, appearing in Rihanna’s Savage x Fenty show for the second season running and making fashion history as one of three curve models to ever grace the Versace runway. Some might assume Claire had just broken into the world of fashion, but in fact, she’s been working as a model for 10 years.

When Claire stepped onto the Versace runway in a figure-hugging, sensuously pleated yellow dress, she exuded confidence, strength and unapologetic sexiness all at once. Walking alongside Precious Lee and Jill Kortleve, together with some of the biggest stars in the modelling world, felt like a pivotal moment for diverse-size representation, yet it wasn’t the first time that featuring plus-sized models on the runway has made the news.

In September 2009, British designer Mark Fast (controversially, at the time) sent three plus-sized models down his runway, causing a media furore resulting in the show’s stylist allegedly quitting. “I remember that well,” says Claire, who was not yet modelling. “It planted the seed and gave me the confidence to think, ‘I could do this, too.’ It shouldn’t have to be like that for girls growing up, though.”

Warm, quick-witted, and a delight to talk to, Claire caught up with Vogue over Zoom to discuss her momentous and life-changing experience at Milan Fashion Week, and her hopes for the future of casting in the fashion industry and beyond.

You’re the breakout star of the season, how does that make you feel?

“After all these years of modelling, it feels really good! I’m excited and inspired to keep moving forward, but I’m also hungry for this to not just be a moment. Consistency is key.”

What first piqued your interest in fashion and modelling?

“When I was younger I was such a nerd for fashion, I couldn’t get enough. I remember looking at the [Alexander] McQueen shows and my jaw would just drop, it was like magic. Back then, my interests were more in the clothing, rather than models, because everyone I saw in magazines looked the same… It was not exactly encouraging, but I was still obsessed.”

When were you discovered?

“In my teens I worked in retail and was scouted a few times, but nothing came of it as I didn’t tick all the boxes for the time. Then one day, I was reading an article about plus-sized models in a magazine and they had the details of an agency at the bottom of the page. Something in me just went, ‘I think I could do that.’ And from there, I was signed at the age of 18.”

When you walked the Versace SS21 show, it marked a monumental moment in fashion history. Versace has surprisingly never included any curve models before. How did that job come about?

“I was in Los Angeles for the Savage Fenty show and found out I landed the Versace job shortly after filming. It was a huge moment, I almost felt nauseous.”

How did it feel to share the runway with two other exciting breakout new faces, Precious Lee and Jill Kortleve?

“It was amazing and cemented a real friendship between us. It was so important that they were both there, too. It’s not just about me, or any individual — we’re united. It’s about showing that there’s space for other body types on the runway. I want more doors and opportunities to open for other models.”

When it comes to body positivity and diverse size inclusion, fashion still has a long way to go. What more needs to be done?

“Having diverse bodies should not be a gimmick and should be included in the casting of every single show. The assumption that women of different sizes wouldn’t want to wear luxury clothing is bizarre. I don’t want to see [fashion houses] use a girl for one project and then not follow through with future projects, it needs to have longevity. I want to see changes from up top, in campaigns and at major labels, so that it trickles down and becomes the norm. I do feel positive about it.”

Sadly, it is still rare for so many people to see themselves reflected in the fashion industry. Growing up, did you see yourself represented, and if not, how did that make you feel?

“Seeing yourself represented in spaces that you are not, whether that’s in fashion, film, or politics, does a lot for a person’s self-esteem and sense of belonging. It’s so important. Being the person now, that I wish I saw when I was looking at fashion growing up, is so rewarding. I want to give others the confidence to take the leap and not worry about what other people think.”

Who have been some of your favourite collaborators so far in the industry?

2020 has been the strangest of years, how did you find lockdown? Any lessons or discoveries?

“There was a period where I felt panic, but then eventually I accepted it. I discovered how much I care about what I do and how important it is for me to keep pushing ahead, no matter what. I also learned that I’m extremely privileged to have a roof over my head, food and safety. My brother works for the NHS and speaking to him made me incredibly proud, but also really aware of the reality of the situation — his experience, along with many others, was vastly different to people who didn’t have to leave the house.”

What advice would you give to someone who is just starting out as a model?

“Rejection is something you have to accept and it shouldn’t be a bad thing, just learn from it and keep going. People assume that things have just started happening for me, but I’ve been working at this for quite a while now. I never gave up on my persistence or work ethic.”

What are your hopes for the future of the fashion industry?

“I hope to see more people from diverse backgrounds in positions they didn’t have before. It’s not just about size inclusion, it’s all of it. It starts from the top and then everything else follows suit. We are all responsible for this change, and I’m super positive that we are finally headed in the right direction.”