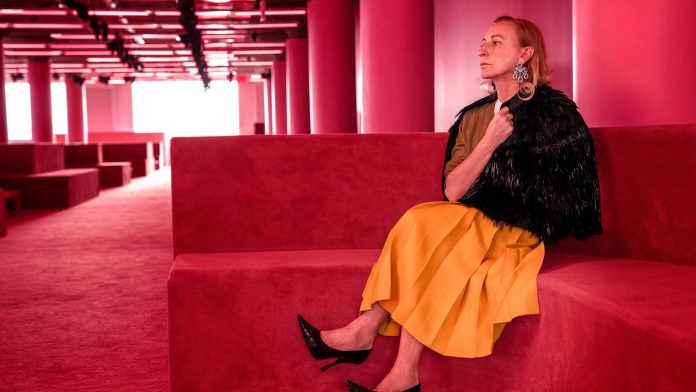 There’s something dystopian about the expansive seventh floor of Prada’s USA headquarters. The ceiling is unfinished cement, the overhead lights are neon fuchsia, and the building’s massive cylindrical supporting columns, like something from a ship or a parking garage, are painted pale matte pink—set details left over from the resort show, held a couple nights before. Headless mannequins dressed in an enviable wardrobe dot the space, numbered tags dangling from their rigid, willowy wrists. The view from some of the oversize windows is the roof of a luxury car dealership, Lamborghinis and Bugattis stretching out under the midday sun; from others, it’s a bright glimpse of the Hudson. It’s a setting that might appear in a beautiful, disturbing film by someone like Sofia Coppola (a frequent face in Prada’s front row) or Nicolas Winding Refn (who participated in a project called Soggettiva earlier this year at Fondazione Prada, the contemporary art institution, in which artists present a survey of personally inspirational films).

Miuccia Prada, who celebrated her 70th birthday in May and possesses the kind of timeless features that beg to be rendered in oil paints, would herself look more at home in the lush, rich palette favored by Luca Guadagnino (another fan, who once called Mrs. Prada “a constant source of inspiration”). Her hair, curling gently at her collarbone, is buttery blonde. Maroon orbs dangle from her ears like dragon eggs; her marigold knee-length pleated skirt is a staple style for both Prada the brand and Prada the woman. Under a caramel-hued short-sleeve sweater she’s wearing a tight, crepe-thin white undershirt that peeks out just so at her sleeves and neckline. It’s unexpected. It’s perfect.

This is, after all, the creative force behind the sartorial juggernaut that is Prada Group, which, between Prada mens- and womenswear and Miu Miu, puts out 10 complex and cinematic collections each year. This is a woman who has spent a lifetime perfecting the art of personal aesthetics, who honed her eye as a teenager and college student in Milanese vintage shops scouring for Yves Saint Laurent, and donned children’s clothes so as not to blend into the crowd. But when I ask her whether she still finds such joy in putting on clothes every morning, she makes a particular, unnameable expression—lips turned down and pursed, head pulled back—that somehow communicates both “perhaps” and “absolutely not.”

“I tend to dress in uniform,” she says. “Most of the things that I love, I can’t wear because of my age.”

“The miniskirt she mentions a lot,” says Verde Visconti, Prada and Miu Miu’s longtime PR director, a balletic attaché who accompanies Prada to most public appearances and has been with the company for more than 20 years. For the duration of our interview she sits, catlike, about five feet away. I’m not sure if she means that Prada often mentions her personal desire to wear miniskirts, which might be true, or that she does in a grander referential sense through her work, which definitely is: a pleated olive knit number in 1994; raw-edged silk printed with a beach scene in 2010; Lilliputian patterned skorts in 2017. When they haven’t been scanty in length, they’ve often been so in opacity. Gauzy ’90s cuts over black leotards. Webs of iridescent plastic gems. She sent male models down the spring 2019 runway in shorts so tiny they seemed destined to inflict genital harm; she called them miniskirts for men.

“Provocative,” Prada says gravely, still imagining the skin-baring clothes she’d be wearing were it not for the burden of time. “Seriously.”