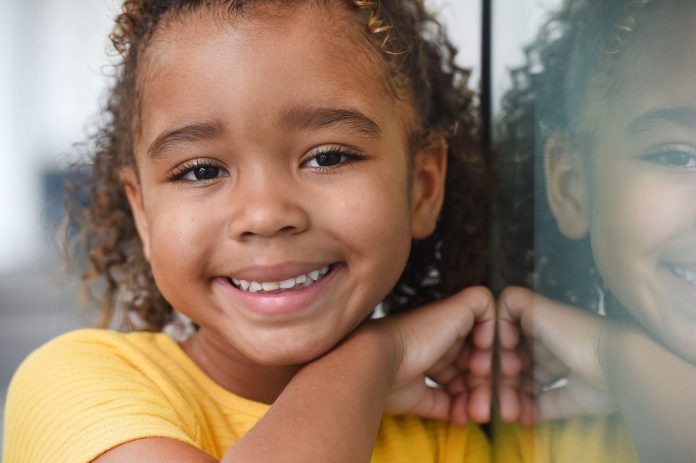 
Xari Wade, 4, strutted the catwalk as part of New York Fashion Week this month. It’s anyone’s guess whether she found the heels, make-up or designer clothing more appealing, but she happily donned them all for Little Mademoiselle, a luxury dress line for young girls.

With family present, she walked the runway at Broad Street Ballroom on September 7, undeterred by the bright lights, the cheering audience or the focused lenses of the paparazzi.

“It was a big crowd,” said her mother, Arianna Hodgson. “I was a bit worried that she would back out and we would have gone for nothing, but she said, ‘I’ve got this’ and went straight on the stage.”

The Bermuda Institute student had limited experience before the actual event. Aside from posing for family and friends, she’d walked as part of a “mini fashion show” for Street Lux, a local clothing brand.

But from her nursery school performances and dance recitals it was obvious she loved being on stage.

“Her dad, Kyle Wade, has a big personality and I think she gets a lot of her outgoing ways from him,” said Ms Hodgson, who never modelled herself although her 6ft 1in mother, Anna Ryden, once did. “She’s always loved heels. She started walking early and would strut around the room in three-inch heels when she was 1.

“I would say that her auntie Shanno and cousin Nyree trained her to be a runway model.

She would walk up and down the hall and say, ‘Model up!’ We’d appease her and clap and I guess it kind of stuck.”

Local designer and fashion blogger Shantia Seymour forwarded Little Mademoiselle’s Instagram casting call on March 6. The up-and-coming designer was looking for 16 girls between the ages of 3 and 12 to show off its line at New York Fashion Week, which ran September 6 through 14.

On the company’s Facebook page Ms Hodgson found moms whose daughters had modelled for the designer, and reached out to see what their experience had been. With their favourable responses in mind, she decided to put Xari’s name forward.

Applicants were asked for a head shot. Ms Hodgson, who didn’t have any professional images of her daughter, sent “a video of her walk and a picture from my phone”.

The acceptance letter from Little Mademoiselle on May 7 initially caused some alarm for her father, a retired police officer.

Once his investigations proved the company was “legit”, he was one of a handful of family members who jumped on a plane to watch Xari in her first New York fashion show.

The promise of an American Girl doll gave his granddaughter additional encouragement to walk the runway, however butterflies set in on her way to the ballroom.

Said Ms Hodgson: “I’m big on talking things through when it comes to emotions and I said, ‘It’s OK to be nervous. If you hate it you never have to do it again’.

“When we checked in [at the ballroom] we saw a few young girls who welcomed her over and, once she tried on the dress, she loved it.’

Ms Hodgson added: “She was smiling and ready for hair and make-up.”

On the back of that success, she’s now considering looking for an agent in New York to help her daughter develop her modelling career.

“As long as she’s enjoying it, and there’s nothing inappropriate about the clothing, we will continue to do it,” Ms Hodgson said. “We’re hoping to find her some local opportunities and are considering securing her an agent, over on the East Coast.

“I love it because it builds her confidence. Seeing her walk on the runway reminded me that there’s nothing we can’t do. I constantly remind her that it’s OK to be scared, but we should always give it a try. I always say that we’ll try [almost] anything once.”

• Look for Little Mademoiselle on Facebook and at www.littlemademoiselle.com