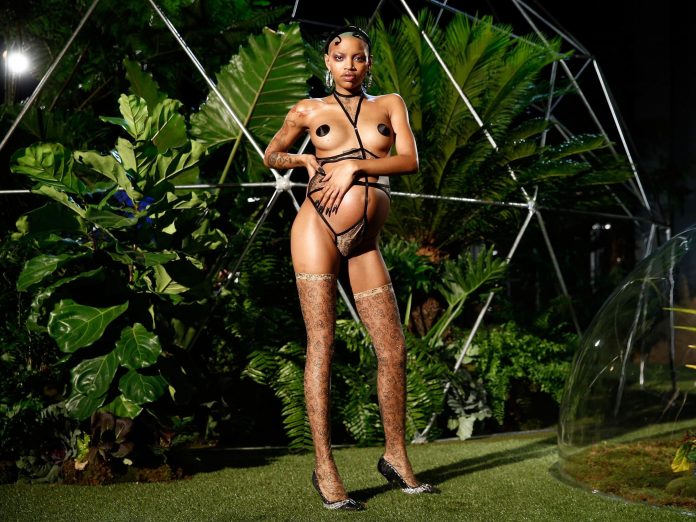 However, unbeknownst to the audience watching the show at Brooklyn Navy Yard, the 22-year-old model was already 2cm dilated when she left the runway.

We’ll tell you what’s true. You can form your own view.

“My last memory before going into the hospital is of Rihanna spanking me with a whip,” the model writes of her experience for Vogue.

Woods was promptly escorted to the hospital, where she endured an additional 18 hours of labour.

Woods’ pregnancy story is far from conventional, as she only discovered she was pregnant at the end of her second trimester.

The model had previously been informed by doctors that she would never be able to conceive a child naturally.

Woods says she started “crying tears of joy” when she saw her son, Saphir, for the first time during a sonogram appointment.

“I had life in me, and felt like I understood the true power of my body for the first time,” the model states.

“If I could bring another human being into this world, nothing was out of reach.”

Woods, who was accompanied to the hospital with her agent and the father of her child, explains that the delivery room was “out of control”.

“Then suddenly there he was: my miracle,” Woods says.

“I have no words for what it felt like to hold him for the first time.”

Following the birth of her son, Woods shared the news on Instagram alongside two photographs of herself at the Savage x Fenty show.

“This is the face of a WOMAN IN LABOUR, we hold s**t down most of us don’t even know how much we’re going through,” the model wrote in the post’s caption.

In January, Woods posted a photograph of herself and her child on Instagram, with the caption, “You saved me, you gave me purpose. I truly love you more than life itself.”