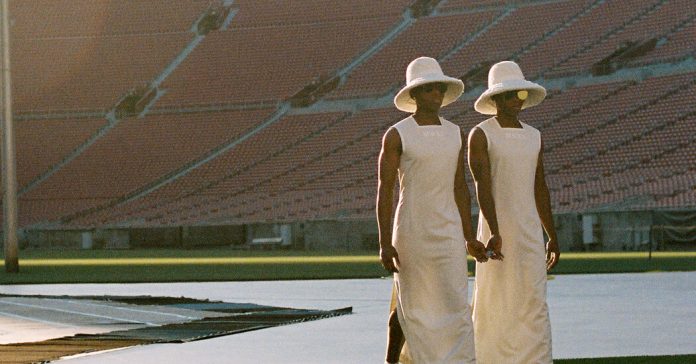 Whatever happened to secondary sex characteristics? You know, those shapes and appendages we develop after puberty as an anatomical signage, an aid to evolution.

Kardashians aside, the cultural appetite seems to be waning not only for visible gender difference but also the exaggerated tell. This is perhaps one of the reasons behind the continued success of “RuPaul’s Drag Race,” where skilled performers wildly exaggerate the markers of gender as if to remind us that among the most determined holdouts for the preservation of all-but-extinct forms of femininity are men.

The rest of us look increasingly alike. We wear jeans and T-shirts and hoodies and sweats. This was already true before Covid-19; if anything, the endless months of Zoom have only reinforced the fact. We dress now largely for comfort because we are at home. We also dress as though our bodies are little more than draped props supporting the puppet heads onscreen.

These thoughts are occasioned by the (mostly) digital fashion shows held over the last several months in New York, London, Milan and Paris and that reach a conclusion this week.

Mostly the shows were divided along traditional gender lines, although many designers mashed up the sexes in shows they termed all-gender or coed. It hardly mattered what terms were used because in reality it is increasingly hard to tell the genders apart.

This is noted in observation, not judgment. Staring at the models in the Prada women’s show, I was repeatedly distracted from Mrs. Prada’s radically refined designs (created in collaboration with Raf Simons) by the sense that the two were playing games with gender. Were these women’s clothes being worn by women? Were some of the models nonbinary or trans? Were they, perhaps, men? (They were not.) Why did it matter?

To the extent that it does, the reason is that gender is subject to fashion — how we define, display, exaggerate or choose to suppress it. This being an anxious age, when real-life encounters are fraught with peril, when being digitally disembodied is the norm, it means something that designers almost across the board reacted by draping, cloaking, ornamenting or, most saliently, obscuring the human form.

Take Thom Browne’s show, set during an imaginary 2132 Olympics staged 239,000 miles from Earth on the Moon. In a video that accompanied the collection, the comedian Jordan Firstman and the model Grace Mahary acted as commentators as models gingerly descended the sharply raked stadium steps of the Los Angeles Coliseum, an Art Deco relic where the 1932 Olympics were held.

There were plenty of period references in the toy-block geometries of the silhouettes, the drop-waist dresses, the skinny skirts in an almost monochrome palette. (Apparently buttercup yellow is to Thom Browne what electric blue was to Yves Klein.)

There was ample evidence of Mr. Browne’s fixation on techniques like quilting, cabling and intarsia and with turning garments inside-out (notably, a pair of sleeves worn as a bustle). There was a predictable level of gender inversion, as well as a rigidity familiar in the work of this fitness-obsessed designer that seems to treat the human body as something unruly, requiring control.

Watching the video for the show, in which some of the clothes were modeled by real Olympic athletes, I found myself thinking about the famous Olympics portfolios photographed by Bruce Weber in full Leni Riefenstahl “master race” mode.

Yes, those images constitute a form of culturally acceptable soft-core politely cloaked in the covers of Vanity Fair. (And, true, Mr. Weber has been sued by some of his models for sexual misconduct.) Yet what truly struck me was how rapidly we have gone from a near cultish fascination with Apollonian physical ideals to a Victorian horror of the unclothed human form.

Is it the pandemic that has gotten into designer’s heads and caused them to show models of indeterminate sex, fully masked, wrapped and clad in draped and asymmetrical layers of soft armor, as Rick Owens did in a show staged, for safety, out of doors at the Lido in Venice?

Is it as a system of warning signals to deflect gender-based assumption — let’s call it the Billie Eilish Protocol — that inspires someone like Demna Gvasalia to send out a unisex (or “uni-everything,” as Vogue said) Balenciaga collection of trenches, parkas, knee-length shorts and windbreakers scaled to the size of a yurt?

What about the raucous print shirts and trousers Francesco Risso created for a coed show at Marni? But for the tiny heads and hands seen peeking out from cuffs and collars, you would barely know there was a human inside clothes that looked as if they were run up at an upholstery shop.

Although nostalgia may have its place, the time is not now, when longing for the past is subsumed to a collective reckoning with the pandemic’s wreckage and the urgent need to imagine our way into a plausible future. To the surprise of some — me, for one — there was much in the collections created during lockdown that was frankly celebratory and that used 21st-century tools to connect with deep humanist urges and immemorial techniques.

The results were collections both beauty- and life-affirming. Dries Van Noten’s exuberant riff on the hallucinogenic 1930s photo prints of Len Lye, a seminal, if little-known, New Zealand-born filmmaker, stood as a reminder that creativity is the most sustainable of resources.

And to create his masterful (if not obviously wearable) Loewe collection, shown digitally way back in July, Jonathan Anderson nourished himself in isolation by collaborating with a global network of artists and crafts collaborators. To note that the Loewe collection was categorized as men’s wear feels about as relevant as saying that the comedian Eddie Izzard wore women’s clothes when he cross-dressed. (“They’re not women’s clothes,” Mr. Izzard once famously sniped. “They’re my clothes. I bought them.”)

Little about Mr. Anderson’s slyly gorgeous stuff — a trench whose sleeves accordioned like bat wings, draped asymmetrical ponchos and knit tunics — seemed yoked to one identity or another.

About the only concession they made to secondary sex characteristics was a hip-level detail on a pleated top worn over matching trousers. At roughly the level of a man’s package, the designer had placed an inverted keyhole, designed in such a way that, where a volume might be suggested, there was a void.