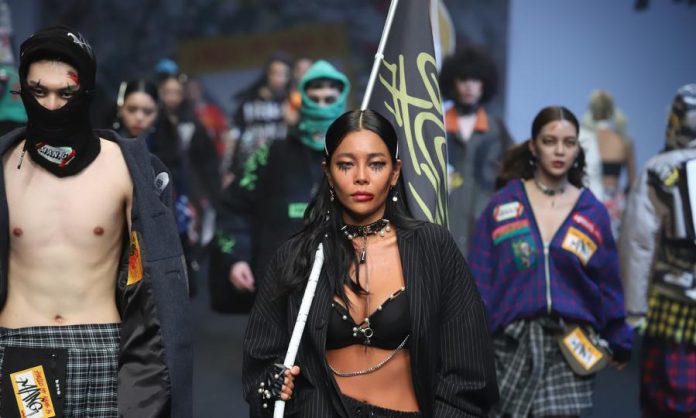 It’s been 11 years since then-Seoul mayor Oh Se-hoon announced his hope to see his city become one of the world’s top five fashion capitals. That was a fairly obvious way of saying that he wanted to see it surpass Japan, since most metrics and estimates at the time put Tokyo Fashion Week in at around #6 or #7.

Of course, Oh could not know that his October 2008 wish would come to fruition, nor that the Dongdaemun Design Plaza (DDP)– a huge, Zaha Hadid-designed complex set in the heart of Seoul’s Dongdaemun fashion/market district that is perhaps Oh’s leading mayoral legacy – would make it happen.

But clearly, it has. Seoul Fashion Week, which ended Sunday, was proof.  But rather than the official collections, it was the street trends that showed how – just like K-pop – K-fashion is all about embracing multiple cultural influences and refashioning them in bold new ways.

Back when what locals now call the “big spaceship” was just a twinkle in the mayor’s eye, the DDP project looked like an architectural spectacle stunt designed to grab Seoul some global attention.

And to some extent, it was. The Hadid-esque structure did not look to be a good fit with the gritty market area surrounding it. But Seoulites’ criticisms, while valid, ignored the crux of what Hadid had been highlighting from the beginning: The design principle of “Parametricism 2.0,” which proposed “multi-modal” spaces for the newly flexible and digital world of today. Hadid was designing a space that could organically change in purpose and utility according to the social requirements of the people inhabiting it.

What was impossible to miss during Seoul Fashion Week, which wound up on Sunday, is that what is sizzling right now is not necessarily high-end catwalk collections. It goes without saying that news packages are prepared each and every season for powerful style outlets from Hypebeast to High Snobiety and from W Magazine to WWD – US Vogue has even planted Korean runway models on its cover.

But it is Korean street fashion that grabs the lion’s share of international attention. So hot is this scene that coverage of street fashion is now de rigeur in top international fashion outlets across the world, and it is now common (and expected) to see journalists from every developed nation on earth hitting the streets around DDP during Seoul Fashion Week.

Korean street fashion is the incorporation of any and everything interesting and/or trending from Instagram, YouTube and Facebook into fashions and looks. It is a “whatever, and whatever works” attitude that pays scant attention to debates about authenticity or what it means to wear certain things.

Korea’s cool kids don’t handwring about whether things synch in a traditionally logical way, or whether certain items or looks belong to them, their tribe, or whether other specific group is supposed to or allowed to wear certain things.

The cool kids in Seoul mix and mimic, borrow and bite, and yes, even appropriate from wherever and whatever they have to in order to make looks work.

Modern Koreans’ experience with other countries’ cultures and practices are relatively new: The average Korean could not get a passport for overseas travel until the early 1990s. Moreover, Korea really only came online — in the sense of being connected to non-Korean information sources, notably global social media services – in the last decade or so.

But now that the country is exposed, it is exposed. South Korea is a culture steeped in a postcolonial willingness to accept all things foreign: Adidas hoodies (or the hoodie itself) are the same as high heels are the same as a Gucci bag or gangster rap. They’re all items from global consumer culture and Koreans may be the world’s most adept pupils in appropriating them into a dynamically diverse visual tapestry of style.

The aural version of this mode of appropriation is K-pop. The visual version, which you see at Seoul Fashion Week, and on the streets around town is the result of a globally-connected, digitally-enabled, social media-enervated inter-connectedness that no one does better than Koreans under 25.

And that fact that the ground zero of fashion is a foreign-designed spaceship-like edifice that has landed in what used to be a low-end Korean market district is – well. Just more hybridity, darling.

Showtime’s Desus and Mero: From Bodega Boys to Late-Night TV

We Found the Sexiest Lingerie on the Internet

The most popular hairstyle the year you were born, Business Insider