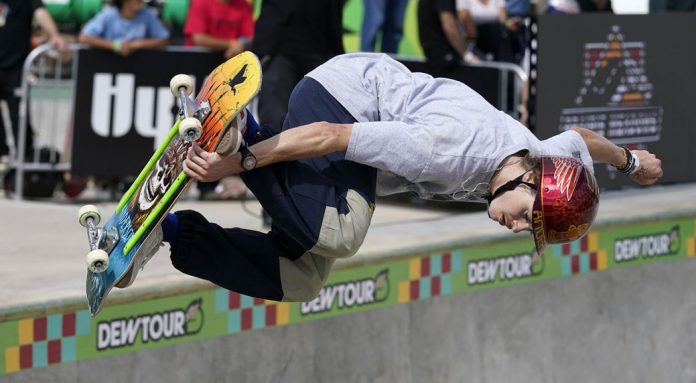 For the first time in the history of the Olympics, skateboarding will be an official summer sport.

While board sports have been a part of the Winter Games for 20-plus years, the Summer Games have been slower to adapt. Now, though, skateboarders will compete alongside some of the best athletes on the planet at Tokyo 2020.

Eighty skaters representing 25 countries will bring skateboarding to the world stage. While the best skateboarders on the planet have indeed previously had a world-class outlet for their talents in the form of the X Games, the Olympics will bring previously unseen attention to the sport.
and
With the added attention comes an expectation that each skater will compete to bring gold back for his or her country. However, many skaters heading to Tokyo have noted that they will first and foremost be heading to the Olympics as ambassadors and promoters of the sport and its culture.

Skateboarding will be split into two distinctive events: park and street, with both disciplines to be observed and scored by a panel of judges.

Park: This event will resemble what many may remember Tony Hawk for, which is plenty of verticality. The course will feature what looks like drained in-ground pools, with steep drop-ins and complex curves.

The park format will feature three 45-second runs, with a competitor’s best run counting as his or her score. Skaters will be judged on a scale of zero to 100 on the flow of their run, use of the course, tricks landed, and execution.

Street: The street portion of skateboarding will resemble what much of the viewing public are used to seeing around their local cities and towns. Skaters will make use of a park featuring stairs, rails, ledges, benches and other architectural features.

The street format will feature two 45-second runs, along with five best-trick attempts. Of those, the best four scores a skater accumulates will count towards their final standing. Each run and best trick attempt will be judged on a scale of 0.00 to 10.0 with judges looking for originality, difficulty, height, speed and execution.

Of the 80 skaters heading to Tokyo, 20 men and 20 women will enter the park discipline, while the other half will split off into the street discipline. The 20 skaters competing in each discipline will be split up into four heats of five, with the top eight from the heats advancing to the finals.

Olympic skateboarding will debut this summer in Tokyo & @andyandersonsk8 will be rocking the @CanSkateboard
But he’s still trying to wrap his head around what repping Canada, and the sport of skateboarding at the International level really means https://t.co/rucbYOIYnL pic.twitter.com/J7HggPKoCb

WHY YOU SHOULD TUNE IN

There will be plenty of Olympic viewers tuning in to catch a glimpse of a sport they may only recognize based on Tony Hawk’s influence.

While Hawk did indeed revolutionize and provide more access to skateboarding than anyone before him, the sport has grown leaps and bounds since then. Over time, skaters have evolved the art of skateboarding, developing and cultivating more complex and jaw-dropping tricks and techniques.

B.C. natives in particular will also want to tune in to watch the three Canadians heading to Tokyo as all hail from the west coast.

Of the three Canadian skaters, two will compete in men’s street, while one will skate in men’s park.

White Rock, B.C.’s Andy Anderson is ranked 30th in the world in the park discipline, but his ranking doesn’t do his talent justice. Anderson’s skate style is a modern mix of Rodney Mullen and Mike Vallely, bringing a meld of old-school street style with high-flying verticality.

Anderson has even caught the eye of the legendary Tony Hawk himself, who compared the Canadian and his move set to that of what you would see in the Tony Hawk Pro Skater video game series.

Berger and Papa rank 10th and 21st in the world respectively in the discipline, and each skater qualified for the Olympics thanks to a strong showing at the World Skate Championships in early June. Both made it to the finals of the street skate at the event, with Berger finishing sixth and Papa finishing eighth.

At that same event, two of the gold-medal favourites for the coming Olympics went head-to-head, with Japan’s Yuto Horigome and USA’s Nyjah Huston finishing in first place and second place, respectively.

Huston is one of 12 skateboarders representing the USA, which is the maximum number of skaters allowed to represent a country under World Skate and Olympic rules. Huston, a native of Davis, Calif., is ranked No. 1 in the world in street skating, and has drawn comparisons to LeBron James and Lionel Messi when it comes to his performance.

On the women’s side, Brazil has a very strong chance of sweeping the podium in street skating, as three of the top four rankings in the world are held by Brazilians.

One of the most noteworthy names coming out of Brazil is Leticia Bufoni. The native of Sao Paulo has become the face of extreme sports via social media, regularly posting videos for her near three million Instagram followers. Now a resident of Hollywood, Calif., she has won gold at the X Games five times and will be a threat to capture gold in Tokyo.

Women’s park features the second youngest athlete at the games in 13-year-old Sky Brown out of Great Britain. Not only is it remarkable that Brown qualified for the Olympics when she was still just 12, but she’s done it as one of the top skaters in the world, ranking No. 3 in the world skateboarding rankings.

Where Brown represents the youngest skater, the oldest is 46-year-old Rune Glifberg of Denmark. Known as “The Danish Destroyer,” Glifberg competed at the first X Games in 1995, taking the bronze medal in vert behind gold medalist Hawk. Glifberg, though, may be most known for his appearances in the Tony Hawk Pro Skater video game series, where he was one of the game’s 10 original skaters.

Turkey’s Mediterranean jewel beckons to all

These are the queer icons shaping fashion