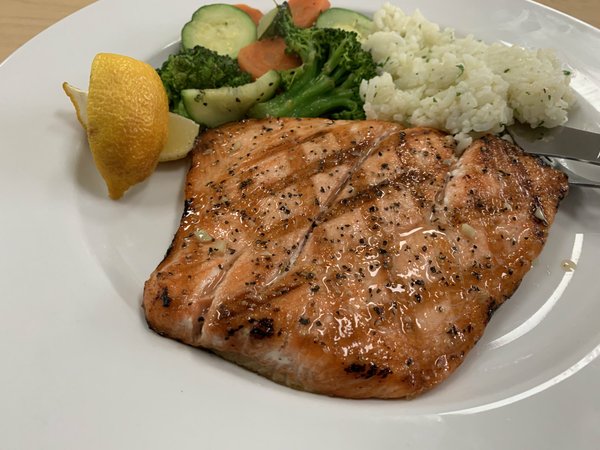 You may have seen us use the term “revolving door” in these pages to label spaces that don’t seem to be able to support restaurants. We use it where there has been a succession of establishments come in and go out in substantial haste, informally defined as half a dozen turnovers in a dozen years or less.

The storefront at 402 Louisiana St. in downtown Little Rock certainly qualifies. Since Your Mama’s Good Food made the move, the first of two, to larger quarters around the corner in 2004, the space has housed, in no particular order, The House of Philly Cheesesteaks; Juice Leaf, a juice bar-slash-Indian restaurant; and no less than three pizza places. That doesn’t count some lengthy stretches it has stood vacant.

The last turnover, from Roma Pizza & Pasta, which had been drawing a small but dedicated clientele for barely a couple of months, to Malibu Cafe, the current occupant, took place so hastily that there were pizza boxes still on shelves behind the cashier/counter when it opened. (Order and pay at the counter and somebody brings your food to your table.) 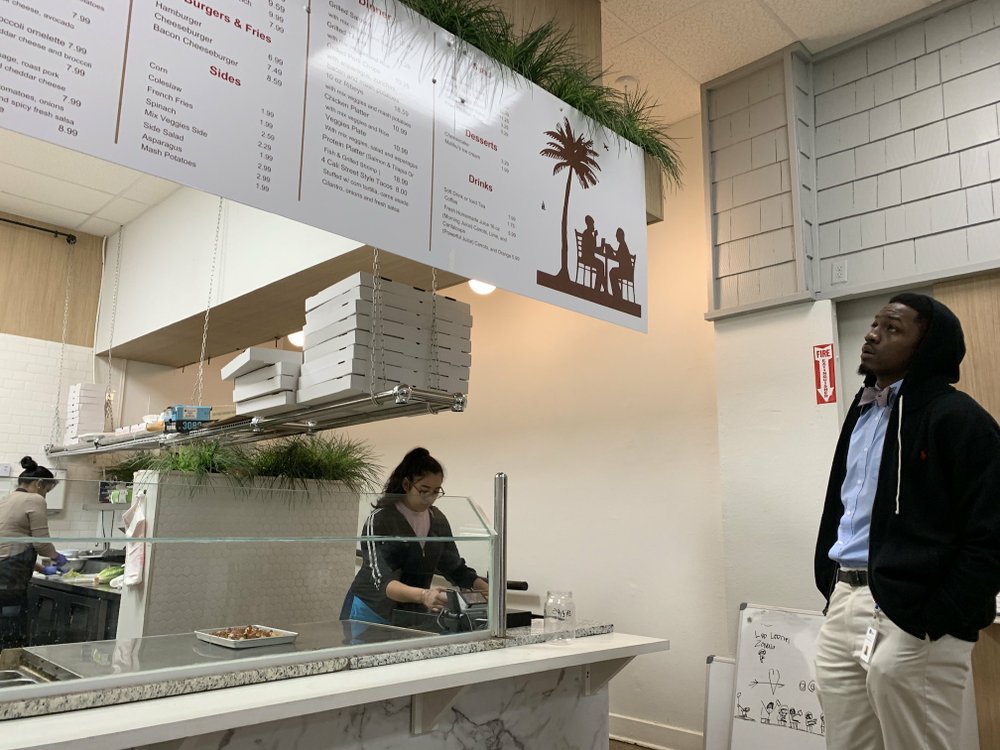 Malibu Cafe replaced a pizza place at 402 Louisiana St. so quickly that when it opened, there were still pizza boxes on shelves behind the cashier/counter. Arkansas Democrat-Gazette/Eric E. Harrison

The decor is simple but attractive — a couple of small shelf-like tables with high stools on the north wall; a couple of small tables in the middle; and groups of tables toward the south that can seat anything from a single diner to a party of a dozen. (So far that hasn’t been an issue — Malibu Cafe has so far been drawing even fewer folks than did Roma; only a couple of occupied tables on our lunch visits, and not another customer in the place at breakfast or dinner. Note, by the way, that while all tables have bottles of ketchup and Cholula hot sauce, not all tables have napkin dispensers.) Photos of dishes are the main accent on the off-white/off-gray walls. Music comes from a sort of disco speaker (with the disco part disconnected) in the middle of the dining room.

Malibu Cafe deserves to find its diners soon — the food is good and the folks are friendly.

It has ambitions most of its Louisiana Street predecessors did not. It’s open all day, for breakfast, lunch and even dinner (closing at 8 p.m. long after most of its neighbors on that block have locked their doors and turned out the lights). It’s a mama-and-papa-and-a-kid-or-two operation; papa is the principal cook. They’re Hispanic but seeing that there’s already a Mexican restaurant (Cotija’s) a couple of doors down, they’ve chosen a slight California accent for their surprisingly broad menu, including huevos con chorizo and beans for breakfast ($8.59) and 4 Cali Street Style Tacos ($8) for lunch and dinner.

We tried and liked those street-style tacos, corn tortillas generously topped with fairly tender carne asada, cilantro and onions with a side portion of fresh salsa. We were even more pleased with the Grilled Salmon (a bargain at $12.99), a perfectly prepared and good-sized portion of fish with a light lemon-pepper glaze, served with mixed vegetables (broccoli, carrots and zucchini, and we even ate the zucchini) and lightly herbed sticky rice (mmmm!).

Nobody in the restaurant business, at least around here, seems to be able to spell “Reuben,” the classic sandwich (well, since 1956, when it was the winner in the first National Sandwich Idea Contest, the competition that the “Garden of Eatin’,” now exclusively available at Jimmy’s Serious Sandwiches, won in 1979 — but we digress). It’s supposed to feature corned beef stacked on rye, topped with sauerkraut and Thousand Island dressing. 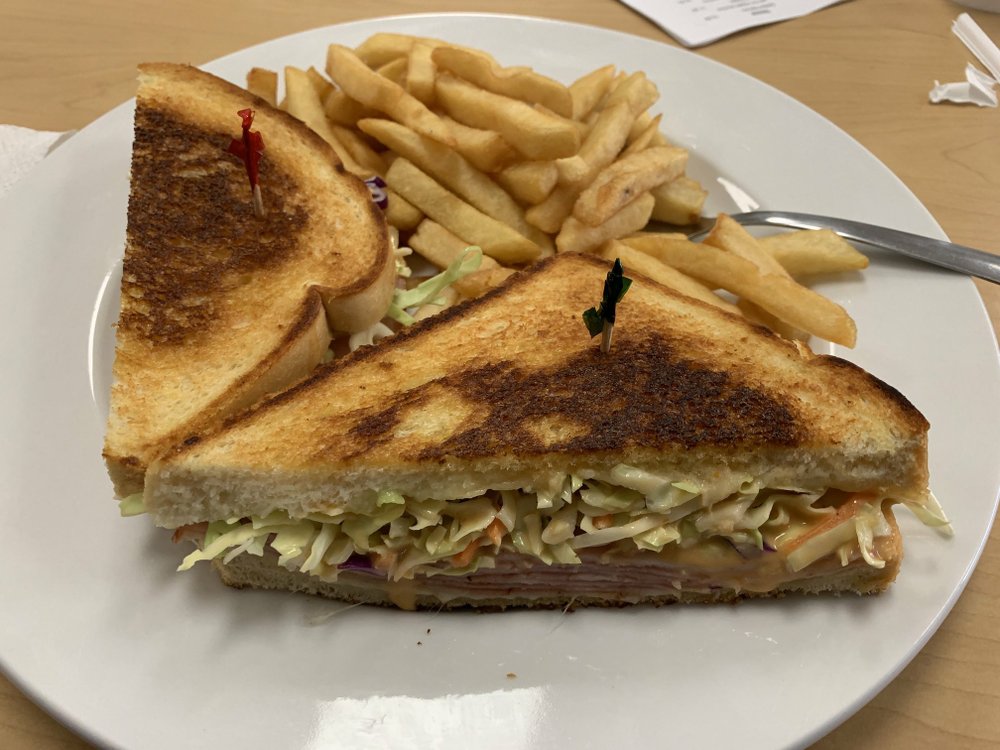 The “Ruben” comes with slaw instead of sauerkraut and a side of fries at Malibu Cafe on Louisiana Street. Arkansas Democrat-Gazette/Eric E. Harrison

On the other hand, spelling it “Ruben,” as the Malibu Cafe menu does ($8.59), also gives them liberty to toy a bit with the construction — here the thin, slightly smoky corned beef, about half an inch thick, comes cut in half and topped with — surprise! — crunchy, tasty slaw instead of sauerkraut, which gave us initial pause but convinced us on the first bite. Of course, it was a bit sloppy; much of the liquid from the dressing leaked out as soon as we turned the first half-sandwich sideways to take a bite, but then it wasn’t soaking into the crisp-buttery-grilled bread, which is a plus. The sandwich is large and filling, and comes with a good-sized side of firm-outside, soft-inside fries. 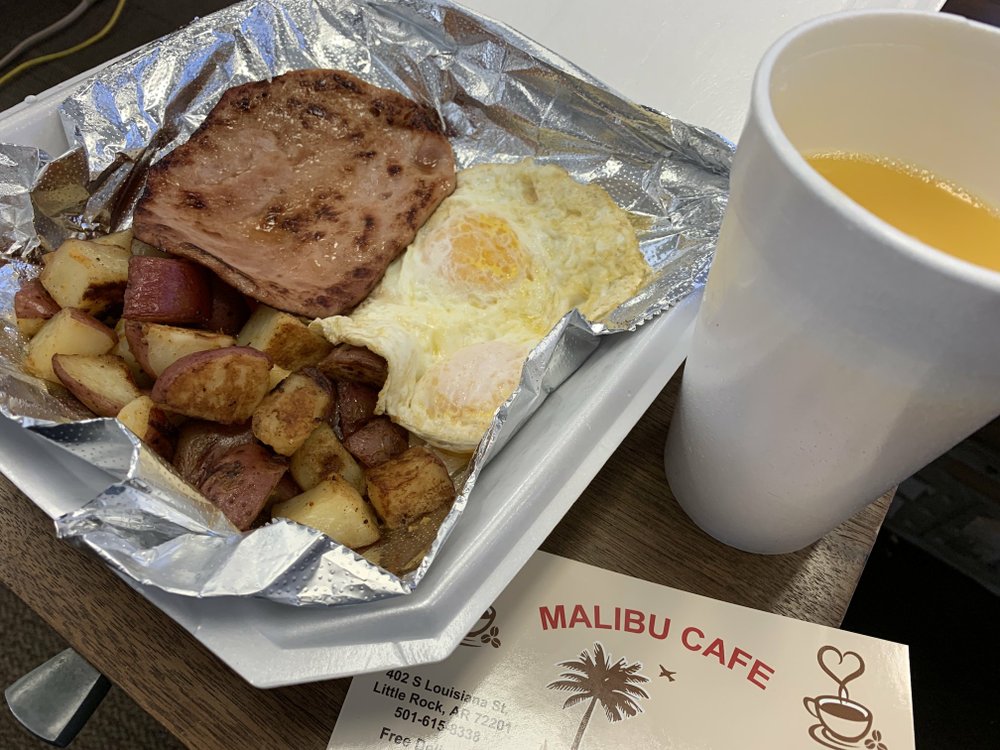 A to-go order of “Smoke Ham & Eggs” from Malibu Cafe came with red-skin potatoes and orange juice but without the promised slice of wheat or white bread. Arkansas Democrat-Gazette/Eric E. Harrison

Malibu Cafe offers 10 two-egg breakfast plates, $6.99-$7.99, which seems a bit pricey until you take into account that they all come with a generous portion of nicely spiced, lightly sauteed red-skin potatoes, fresh-squeezed orange juice and a slice of wheat or white bread. Our “Smoke Ham & Eggs” ($7.99), which we got to go, made for a filling breakfast, our two over-medium eggs done nearly perfectly, and with a minimum of salt (we’ve had more eggs ruined by oversalting, and it’s an easy fix — the customer can always add salt but can’t remove it), plus a sizable slice of ham that didn’t taste as smoky as the menu suggested but was still pretty good. However, our promised slice of bread was missing.

Other options include eggs with bacon and with pancakes, waffles or French toast (plus bacon or sausage), and a selection of three-egg omelets. Various items are also available “a la carta.”

Why more women are spending big on one-off clothes

How to master the season’s top eyewear trends