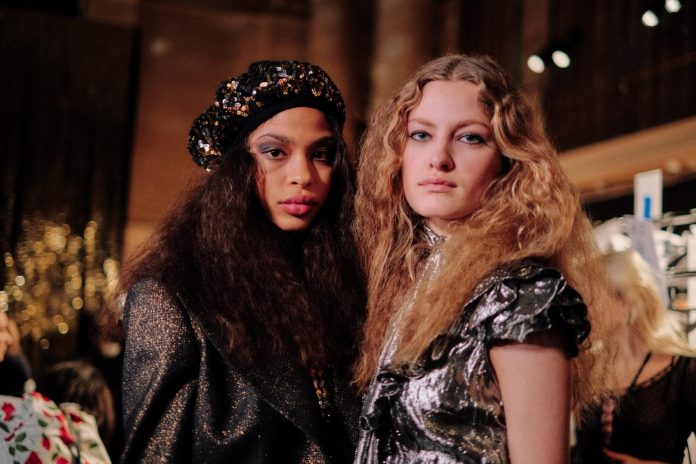 Grounding his autumn/ winter ’19/’20 collection in some of his salad days, Kors paid homage to the characters of his stomping ground in New York’s West ’50s (streets that is) in one of his most theatrically exuberant collections of late that elicited a smile – and a wiggle – from even the most weary editors on the last day of New York fashion week.

Setting the dial to 1977, the year Kors arrived in the city to follow his dreams, he recreated something of the style melting pot that existed among the creatives he was so captivated by when he would spend “too many nights” at Studio 54. The drama, the élan, the confidence of that time he said he’d like to bring back in a time when he sees too many women chastened by the ugly feedback loops that exist on social media. At a preview for the show he spoke of to wanting to coax women back toward delighting in their real personalities, much like he began doing when he was young and delightfully naive enough not to be intimidated by a big city like New York. “Everything has to have joy to it,” he said. Here are the seven new style rules to take away.

Coats as show-off, not cover-up
Why does a coat need to be boring? So posed Kors who cast his in emerald and black intarsia shearling, patchwork Mongolian wool and a waiting-at-the-velvet-rope trench in metallic leather. “They can certainly cover up, but at the same time they’re joyous.”

Small bags are BS
Bags, Kors rethought as travel size for day. Destination: your usual routine. Calling BS (his words) on people who say they only travel with the bare minimum, he produced structured leather satchels, camera bags and duffels with comfortable, sturdy straps. “If I hear another person say, ‘but I don’t have anything to carry. All I need is my phone.’…” he said. Models swung them lazily from their hands, not over their shoulders, as if to emphasise their grab-and-go credentials.

Evening wear is not about gowns
The slinky sequinned cocktail dresses that punctuated the show in black, auburn and teal, one with a marabou trim, may have looked weighty but were in fact made from stretch silk jersey. The idea here was movement, and notably none seemed to creep into overtly formal gown territory. This was to allow such freedom with Kors deliberately splicing up legs and across torsos to free up the essential muscles on any dance floor- same goes for the gold plongé minis.

Try the cocktail hat
Kors collaborated with Stephen Jones on what he called ‘signifiers’. “It’s a wink it’s personality,” he explained of the silver scrolled sequin and netted head piece Gigi Hadid donned to open the show, then a model in black feathered cap matched to a skirt suit in metallic wool with cascading ruffled hem. Other options? A sequinned beret or gold fascinator, with the instruction being to keep it in tune with your outfit’s palette.

Off-duty doesn’t have to mean off-the-hook
Forget squeezing your Soul Cycle in before dashing to brunch sans a change, the first athleisure, as Kors sees it, came from the ballroom dancers and ballerinas of places like Roseland and Carnegie Hall. Entire outfits, some matched to model’s skin tone, were rendered in cashmere dancer’s wraps, skirts and bodysuits replete with leg warmers to signal dancer off-duty. The aim is not to turn women into company principles, but to give them an option in their down time that reads casual elegance, not sweaty compression tights.

Summer dresses, meet your new love interest: tailoring
Tea dresses with romantic fluttering sleeves in daytime florals, Kors chose to pair with tailoring.  He wanted “beautiful tailored jackets mixed with things that are soft so there’s romance but at the same time there’s a sense of polish and power”. Where a glen plaid blazer would be, there would be a crepe de chine skirt with asymmetrical hem. Looseness, light fabrics and sometimes feathers as “thins that catch the wind,” were made for walking, running and indeed dancing.

Rethink that ‘street’ look
“I am actually a street designer bc the reality is what I design is that it’s for real life, it’s for the street. Sometimes that real life is heightened,” said Kors, explaining that the new street style is not about sneakers, tracksuit pants and hoodies. Instead it’s an exploration of personal style; what we see on the street can be polished, elevated and as varied as the women who wear it.

The Law Of Attraction, The Law Of Direction And Me, Crying On Wilderness!

The Loa – Every “Reality” Recently Been Focused By Someone Into Being

Find Who A Phone Number Belongs To In 5 Easy Steps

Trucking – The Rules Of The Journey

How To Cure Deep Wrinkles And Ugly Fine Lines On Experience

Style Your Automobile With Top Rims And Tires