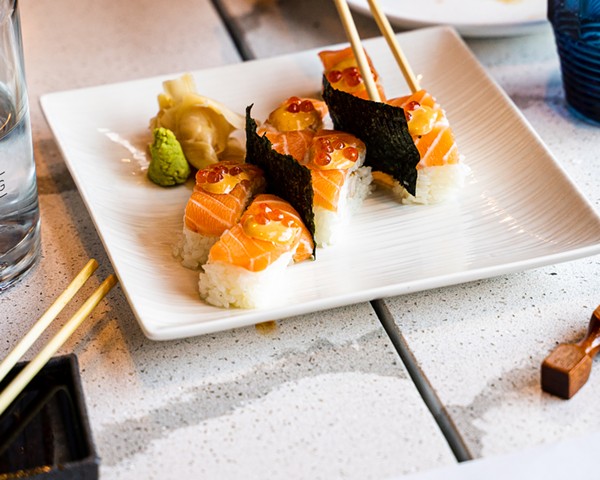 Proceeding from Progressive Field to Public Square, the area around East Force Street and Prospect became vibrant in a way that wasn’t there a few years ago. Diner spilled on a sidewalk patio that meanders up and down around the block. From the sesame awning window, you can see the hopping bar and the lively restaurant, and you can get a glimpse of the chef and owner Dante Boccazzi, who is the main character of the current excitement.

For some time, it seemed that Cleveland’s brightest stars began to lose their luster. Home to famous chefs such as Michael Symon, Zack Bruel and Jonathan Sawyer, East Force Street was in danger of identity after the rapid closure of Chinat, Greenhouse Tavern and Laura. .. There was light at the end of the tunnel, but the tunnel felt like it was getting longer and longer, and the promised project was pushed back. The chief was Goma, who had been talking about breathtaking conversations for two and a half years. But now that we’re finally here, we can all sigh of relief.

Unlike ginkgo, which feels like a corridor shrine to raw fish, sesame offers a more open, comprehensive and comprehensive product. It’s the type or place where friends can stop by for sushi rolls and cold sake on their way to a baseball or basketball game, but it’s also appealing to couples looking for a sweet date nightspot. Construction workers have succeeded in completely transforming the former Chinato restaurant into a whole new environment. The chopped space, subdued tones, and peekaboo kitchen have disappeared, and the large cocktail bar Slash Sushi Bar in the center has been replaced by a lively and unified space that dominates.

If Cleveland, like most cities, suffers from a labor shortage, it will be difficult to recognize when visiting Goma. Behind the three-sided bar is a cheerful sushi chef executive. There is another battalion of cooks in the kitchen. There are even two hosts who are eager to guide guests to tables inside and outside for good. Once seated, the server will guide you through a rich double-sided menu, divided into raw and cooked foods, just like the restaurant itself.

What Bokkazzi was most looking forward to was that he was able to expand his roster of warm Japanese dishes such as Tobanaki, wok fried rice, and noodle soup over the long journey to the opening. Similar to the one served at the famous Knob where the chef once worked, Tobanaki is an elegantly constructed meal served roasted in a shallow ceramic container. Options range from tofu to tenderloin, with gently cooked protein combined with a soy sauce base seasoned with asparagus, greens and Japanese mushrooms. The pork rib version ($ 16) featured half a dozen ribs of tender, juicy meat.

There may not be a better place to enjoy sushi in town so far than East 4th Street. The setting, selection, quality and preparation of sesame ingredients are excellent. From the perfect slice of yellowtail sashimi ($ 6) to the creative roll featuring crispy tempura fried shrimp, the options are endless. The shrimp roll ($ 14) contains crispy seafood, asparagus, rice and eggs, and the spear and shrimp tails climb as high as the city skyline.

Order Botan Shrimp ($ 6) and enjoy the plump, sweet shrimp served raw on a handful of vinegared rice. Following that delicious bite, it was delivered from the shrimp head kitchen, lightly tattered and fried in a crispy snack. I tasted the best uni ($ 14) of my recent memories and a solid twist of spicy tuna and eggs ($ 9), yellowtail and green onions ($ 9). For stubborn sushi bar fried, don’t miss the special ones like steamed abalone ($ 26), sliced ​​and served in iridescent shells. Similarly, eaters can opt for sashimi or sashimi omakase tasting featuring fresh prey of the day.

Even today, two months after the opening day, sesame is an unfinished project. The table with a built-in shabu-shabu burner still needs to be adjusted, and the craft cocktail club “Jappone” downstairs is also underway. But for now, Goma is already helping drive the downtown dining scene into the next golden age.

How To Do It Without Breaking The Bank

Where Were Plus-Size Models on Fall/Winter 2021 Runways?