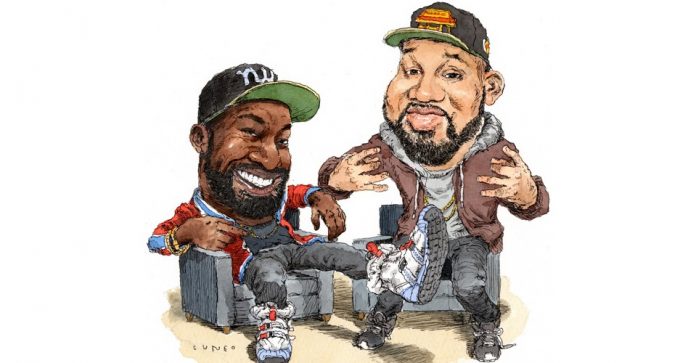 “I was fucking wild,” Mero tells me at one point. “I was just kind of like, ‘I want instant gratification—I wanna get high now, and I wanna get laid now.’ I can get a job, work 12 hours a day, wait until Friday for a check, or I can just go to Connecticut, hit 10 CVSes, steal all the hydroxyzine they have—” Desus cuts him off: “Okay, you’re being very specific right now.” Mero dissolves into a giggle fit: “Operation Shoplift! We got him!”

Today’s episode of Bodega Boys goes on for more than an hour and a half. Somehow they manage to get laughs out of a conversation that begins with the Boeing plane crash in Ethiopia. Many things are said that cannot be printed in this magazine, or any other, and that might make even Showtime blanch. In fact, Desus and Mero splinter off in so many directions that they never once mention the DJ Envy Ambush.

Desus and Mero have just finished taping their podcast, and they are sitting and talking and making each other laugh. They are also pondering the clout they’ve suddenly accumulated. Their first guest on Showtime was Alexandria Ocasio-Cortez, who represents the eastern part of the Bronx in Congress and whose easy mastery of its vernacular only underscored the desperation of Republican attacks on her authenticity.

Gillibrand, who appeared the week after my visit, won over Desus and Mero by being equally true to her own roots, which are in rural upstate New York. It didn’t matter that she’s not from the Bronx; what mattered was that she didn’t pretend to be. She didn’t pander. She was herself. “It looks like she’s just hanging with two people,” Desus says. “And that’s what we’re going for.”

Already, the Showtime series is beginning to play a king/queenmaker role among Democratic hopefuls, similar to the one played by Rachel Maddow’s show on MSNBC; as of this writing, Cory Booker is up next. Desus and Mero are giddy about these appearances. They know that if a candidate wanders on set with no idea what she or he is signing up for, that person could end up getting pantsed on national TV.

“We’re gonna be very up front,” Mero says. “We’ll be like, ‘Yo, fam, watch the show before you come up here.’ Because you’re not gonna be able to come up here and be like, ‘Don’t ask me about this.’ Say you come on this show, like, ‘Oh, I wanna reach out to Millennials’?”

Sitting side by side in a pair of bucket seats ripped out of a scrapped car and planted beside a coffee table, they take turns answering what seems like a natural question: Don’t you ever get tired of talking to each other?

Mero tilts his head as if he’s trying to think, but he comes up empty. He shakes his head. Nope. Never. Once, during a gig in Boston, they went on so long that the theater owner had to intervene. “He was on the stage flashing a flashlight,” Desus says. “He was like, ‘You have to get the fuck off the stage. These people have homes. They wanna go home.’ ” Now many of their contracts for live gigs include a stipulation fining them if they go on too long. “It’s the only way we’ll get offstage,” he explains, adding that their friendship has but one logical endpoint: “We’re gonna get fused together.”

“I don’t know how your wife is gonna feel about my sex life, though,” Desus says, dragging things into his favorite gutter. “I gotta put the sheet up.”

And if the fusing doesn’t take?

“Write this down,” Desus says. “Both of us are gonna host The Price Is Right.”

This article appears in the June 2019 print edition with the headline “Desus and Mero Beyond the Bronx.”

We want to hear what you think about this article. Submit a letter to the editor or write to [email protected]

Devin Gordon is a writer based in New York City.

Dangerous TikTok beauty trends that can cause scarring, blindness or even cancer