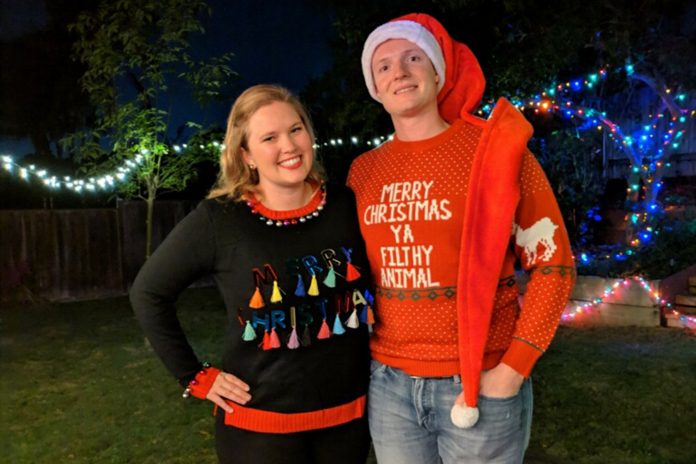 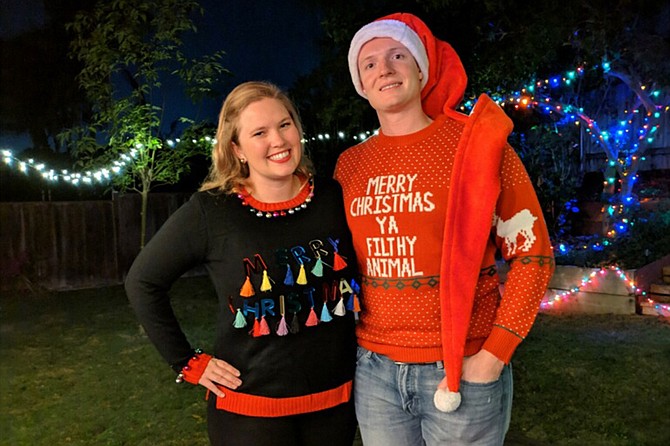 Jenna and Spencer felt festive in their ugly Christmas sweaters.

‘Twas the week before Christmas, and I was Facetiming with my friend, Alex, 30, who was wearing an ugly Christmas sweater after finishing her virtual Secret Santa office party. “Still had my slippers on, though. I won’t let them change me!”

Her black pullover (Amazon, $24.99) was decorated with all things holiday, including red bows, snowmen, and poinsettias. “I don’t think there is such a thing as an ‘ugly’ Christmas sweater; all sweaters are beautiful. But these sweaters in particular, in my opinion, are more comfy and allow you to be your true, goofy and unique self. There’s no pressure when you’re wearing an ugly Christmas sweater. Not to mention, they’re a good conversation starter.”

Alex fully endorsed the message behind this particular seasonal trend. “I don’t know when this tradition started, but I am here for it and never want it to end!” 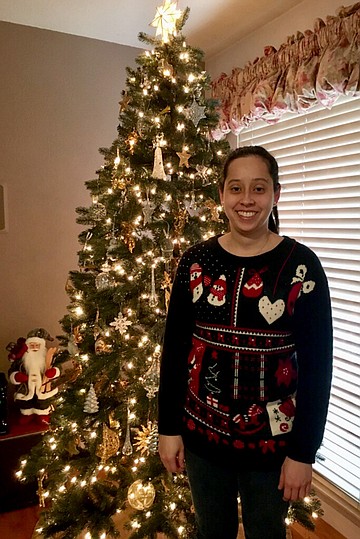 Alex dressed up for her virtual Secret Santa work party.

This year’s restrictions didn’t stop Jenna and Spencer from feeling the holiday spirit. The couple captured a picture of their festive outfits one evening, when they took a stroll around the neighborhood to look at the lights.

Jenna, 30, found her “Merry Christmas” tassel sweater (Walmart, $15) while shopping a few years ago. “My mom stopped and said, ‘These are hilarious!’ She and I bought one for that year, grabbing the tackiest ones we could find.” She decided on hers because “it looks like someone in elementary school might have designed it! I love the plastic beads around the neck and sleeves.”

We attempted to pinpoint exactly when the ugly Christmas sweater became all the rage. Husband, Spencer, 32, estimated that “it had to be around 2011-2012. I purchased mine from Urban Outfitters back in December 2014.”

He added an extra long Santa hat to match his bright red Home Alone graphic sweatshirt. “I’m embarrassed to say my sweater cost $85. In my defense, ugly Christmas sweater parties were becoming more of an annual occurrence, and I didn’t want to have to buy a new one every year. And it didn’t smell like a thrift shop, which was a plus!”

Spencer was skeptical about the trend’s longevity. “It’s been fun, but I think it has about run its course. I’m expecting Gen Z’ers to disavow this tradition, label it as lame, and figure out something different in the next few years.” He expected this memo to be sent via TikTok.

Jenna was along for the sleigh ride, however long it lasts. “I’m always a fan of a themed party, so I’m on board with it! It’s a silly tradition, but it adds some fun to holiday get-togethers.”

Pick up a bargain at Fife ladies’ fashion show fundraiser