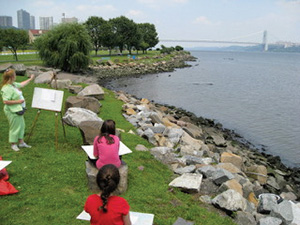 Sheryl Urman and students in a modern art camp. (Credit: Art for Learning) Safari campers show off their giraffes. (Credit: Art for Learning.) Impressionist campers with their copies of Monetâs Japanese Bridge. (Credit: Art for Learning.)

What’s your idea of the perfect summer day? For Sheryl Intrator Urman, it’s sitting in Central Park under a blue sky, teaching students in her specialty art camps how to draw and paint. “I love exposing children to new experiences, like going to a museum, and then helping them create their own art in the park,” she said. “It’s such fulfillment for me and an experience that will always resonate with them.”

Urman began weekly summer art camps for children, under the name Art for Learning, 20 years ago. Her own small children were in backyard camp, and all the mothers talked about how they wanted their children to enjoy summers with more enriching activities. A trained artist, Urman thought about how she could turn her love of art into a creative learning experience for children. She developed a format that has successfully kept children engaged and happy every summer: weekly camps divided into age-appropriate groups, from first graders through teens, with a theme, learning in her home studio, trips and many creative projects. Days in the city often include stops at a kosher restaurant for lunch or ice cream. Talent is not a prerequisite for the camps, only interest and enthusiasm.

Urman’s first art-themed camps, and still the most requested, are about impressionist art. The children learn about the lives and works of the impressionists in France and view original masterpieces on visits to the Metropolitan Museum of Art. Depending on the age, Urman guides the children in making their own interpretations of Van Gogh’s “Irises,” or brings them to Shakespeare’s Garden in Central Park where they use chalk pastels to draw flowers on paper in the impressionist style. Older groups focus on Monet and copy his famous Japanese Bridge landscape. The oldest group studies American impressionists and paints the Bethesda Fountain in Central Park. By the end of the week, the children have learned, at their own level, how to mix colors and how light affects the look of a painting. They leave with original artwork using impressionist techniques.

Modern art camps introduce children to the works of 20th-century artists like Picasso and Warhol. Bringing in a mix of cultural influences, the children listen to the music of the times, like Glenn Miller, whose big band sound was a significant influence on artists, and take trips to the Metropolitan and Guggenheim museums, and others that have relevant exhibits.

Urman has two camps for the youngest group. In Safari Camp, for first to fourth graders, the children learn about giraffes, tigers and lions and the continent of Africa. On a trip to the Museum of Natural History, they see how the animals lived in their natural habitat. At the Bronx Zoo, the children see living, breathing animals and learn about how a zoo is structured. Many projects keep the campers active; all the children learn how to draw a giraffe.

The Dinosaur and Under the Sea camp takes children on eye-opening tours of The Museum of Natural History and the Brooklyn Aquarium. Young children learn about the giant, extinct creatures of old and the many species of fish that live under the water. They learn about oil pastels, sculpture and painting and leave camp with an original “fossil” made from plaster.

Fans of the Percy Jackson novels can learn more about the world of their heroes in a Percy Jackson camp. The group will visit the extensive collection of Greek and Roman art and artifacts in the Metropolitan Museum and go to the Empire State building where Percy and his friends looked for Mount Olympus.

Budding historians interested in how Jewish life developed in 19th- and 20th-century New York can travel back in time with the Jewish Immigrant Experience. The group will visit The Tenement Museum to see how early arrivals lived, and Ellis Island, which was likely the first stop in the U.S. for the great-grandparents of many campers.

One of Urman’s daughters loved fashion and inspired Urman to create fashion camps. Younger campers will learn about the multi-million-dollar doll industry; how fashion trends find their way into clothing for dolls and how those decisions are made. They will go behind the scenes on visits to the American Girl Doll and Build-a-Bear stores. Under Urman’s direction, the campers will learn how to draw and paint one of their favorite characters: a Disney Princess.

The top teen group will spend a day in the Metropolitan Museum studying the history of fashion trends by analyzing how artists have portrayed clothing in their portraits and view the exhibit “Camp” about over-the-top fashion statements. They will also spend a day in Soho, where they will be welcomed into specialty boutiques by owners and managers who will explain design trends, branding and merchandising. If there are enough students (minimum of 10 needed), they will be invited into the showrooms of leading fashion designers.

Summer is about fun, and there’s plenty of it in art camp, even as the kids develop new skills. “They’re having such a great time exploring and creating, they don’t even realize how much they’re learning,” Urman said. Parents also appreciate the life lessons children organically pick up from the experience. “If the fashion students are meeting industry representatives, they learn to conduct themselves appropriately like making eye contact and saying ‘thank you.’ For some children, this is the first time on a trip without their parents. They learn how to handle money when they buy lunch, how to order, even how to cross the street,” Urman added.

The knowledge children retain from an art camp can pop up in unexpected ways. One parent related a funny anecdote to Urman about the time the family went on vacation and arrived at a disappointing motel room. The graduate of impressionist camp turned to her mother and said, “But Mom, look on the wall: there’s a Monet here!” On a more practical level, many former students have found that their Art for Learning experience was a springboard into a career.

Urman’s own art career has skyrocketed. Since starting Art for Learning, Urman’s work has been shown in exhibitions—she has been the curator for several—and sold in galleries. She teaches afterschool art classes for students and gives lectures and museum tours for adult groups.

For more information about Art for Learning Summer Camps, classes and tours, contact Urman at 201/503-9796 or [email protected].