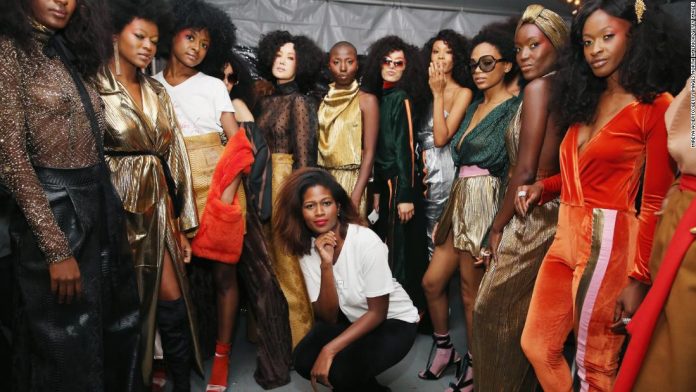 African-American culture has long influenced global fashion trends. And now, finally, a growing number of black creatives are shaping the industry from within. Designers like CFDA/Vogue Fashion Fund-winner and founder of Pyer Moss, Kerby Jean-Raymond, and Virgil Abloh, who made waves with his luxury streetwear label Off-White before becoming artistic director of menswear at Louis Vuitton, are among the most influential designers working today.

But despite these success stories, and the spike in black models appearing on major fashion catwalks, black designers are still underrepresented. Even in New York, where about 25% of the population is black, only nine out of the dozens of designers showing on the official New York Fashion Week schedule last season were black.

One company trying to address this diversity discrepancy is Harlem’s Fashion Row (HFR). Founded by Memphis-native Brandice Daniel, the organization provides a platform and support for black designers, helping them make all-important connections that could sustain their businesses.

Daniel first conceived HFR in 2007, when she was a buyer for wholesaler International Intimates. After attending a fashion show in Brooklyn and researching the dearth of black designers represented in major department stores and at fashion houses, she was inspired to host her own multicultural fashion shows in Harlem, which has historically been an epicenter of black creativity.

Since then, HFR has staged fashion shows and social events to promote emerging talent and toast the achievements of black creatives across industries. But its work doesn’t stop there: In February, the company hosted an exhibition in tribute to Ruth E. Carter, who recently became the first black person to win the Oscar for Best Costume Design, and partnered with Google on a summit looking at diversity in fashion.

Last year, HFR launched its most high-profile project to date: a collaboration with Nike and Lebron James. The sportswear giant approached the company to scout women who could design James’ first women’s sneaker, the HFR x LeBron 16.

In the end, three women from Harlem’s Fashion Row — Undra Duncan, Felisha Noel and Kimberly Goldson — worked with Nike designer Meline Khachatourian to bring the shoe to life. After making its debut at HFR’s annual Style Awards and Fashion Show last September, the shoe reportedly sold out five minutes after their release.

Duncan, who started her Undra Celeste line 10 years ago after stints at Calvin Klein and Tory Burch, described her two-year relationship with HFR as “a beautiful partnership” that has helped her make connections with buyers and other industry insiders. (According to HFR, only 1% of fashion designers sold at major US department stores are black.)

“HFR can impact your business greatly if you’re already doing the work,” she said in a phone interview, though she stressed that the organization was no “magic pill.”

She also praised HFR’s efforts to bring marginalized voices to the forefront of the industry: “There’s no denying multicultural designers or people of color add an amazing flavor and depth to the industry whether the powers that be understand that or not.”

Noel, whose brand, Fe Noel, has been worn by the likes of Michelle Obama, is heartened by the progress being made in terms of diversity, but still believes more should be done to help young black designers gain access to the industry.

“I hope for the future black designers get access to more resources. I hope more action is taken for inclusivity. So that anyone with talent can move in these spaces, no matter the color of your skin or where you come from,” she said.