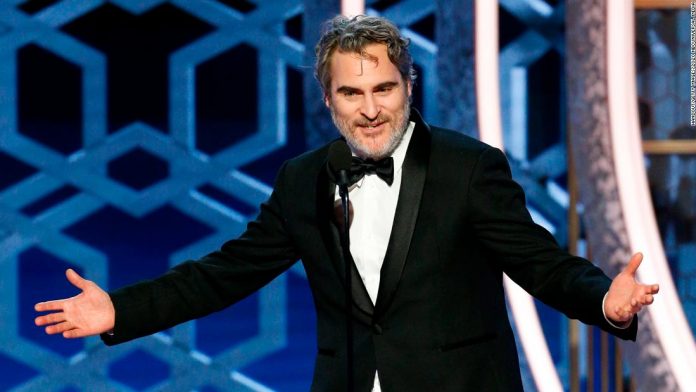 Written by By Scottie Andrew, CNN

Celebrities want you to stop shopping? Easy for them to say.

Joaquin Phoenix will wear the same black Stella McCartney tuxedo to every award show he attends this season to “reduce waste,” designer McCartney announced this week.
Jane Fonda, who led her final Fire Drill Friday climate protest in Washington on Friday, vowed the red coat she wears on Capitol Hill will be the last piece of clothing she’ll ever buy.
Celebrities can afford to stop buying old digs — they’ve got high-end ones to hold on to. McCartney’s brand relies on recycled nylon and polyester, wool from small, sustainable farms and organic cotton. Fonda told the Hollywood Reporter she bought her coat at luxury retailer Neiman Marcus (apparently for $500 on sale).
Famous people typically don’t wear the same outfit twice (unless they’re Tiffany Haddish, who rocked the same white, jewel-necked Alexander McQueen dress to at least three events that were filmed and broadcast) for the same reason non-famous people don’t. They don’t want to be photographed in it more than once, said Alana James, senior fashion lecturer at Northumbria University in Newcastle, England.

“Award ceremonies are just the celebrity versions of the ‘Instagram effect,'” she said, referencing the role of social media in users’ purchasing habits.

Fonda and Phoenix’s small symbols of solidarity are meant to inspire the same activism in the fashion industry and everyday folks. But how far can one tux and a red coat go?

The fashion industry is one of the most profitable in the world at more than $2.5 trillion, according to the United Nations.
It also has one of the largest carbon footprints of all industries. Fashion production, manufacturing, shipping and use is responsible for 10% of the world’s annual carbon emissions, the UN Environmental Programme found.

Nearly every step in the supply chain of a garment contributes to the industry’s carbon output, said Tasha Lewis, an associate professor of fiber science and apparel design at Cornell University’s College of Human Ecology.

Growing textile materials like cotton requires land and water, and lots of it. The fashion industry produces about 20% of global waste water.
Synthetic materials like polyester and nylon, fabrics that keep clothing stretchy, are made with fossil fuels. Textile production can generate as much as 1.5 trillion pounds of carbon emission every year.

The manufacturing phase relies on machine power. Finished garments are shipped by plane, train, boat and truck, all energy-intensive modes of transport.

See this tux? You’ll be seeing a lot more of it, if you keep up with award shows. Joaquin Phoenix plans to wear it to every ceremony he attends to cut back on textile waste. Credit: Handout/Getty Images/2020 NBCUniversal Media

In stores, garments hang on plastic hangers. They’re put in plastic bags and packaged in layers of plastic. Only about half of packaging materials were recycled in 2017.
Once clothing in a consumer’s possession, it becomes worse for wear. Washing clothes uses about 41 gallons of water per load, on average, and the average American family washes about 300 loads of laundry every year.
Chemicals in the detergents whirl in the water. Microfibers strip off synthetic fabrics, as many as 700,000 fibers in a single load of laundry, and leech into drinking water and oceans.
And when the consumer outgrows the garment, it’ll most likely end up in a landfill: Of the 16.89 million tons of textiles generated in the US in 2017, about 11.15 million tons were landfilled.

Cutting back on clothes is a choice rather than a necessity now. But if cotton crops dry up or water depletes, it could become the only choice.

‘We haven’t always shopped this way’

Clothing production has nearly doubled in the last two decades, largely due to a growing middle class and an uptick in per-capita sales, according to the Ellen MacArthur Foundation, a nonprofit that supports a zero-waste economy.
But another part of that change has been driven by a need for convenient and cheap clothing: To emulate the trends celebrities set, fast-fashion brands cropped up to answer the demand. That increased the speed at which garments are worn and disposed of, according to Maxine Bédat, director of the New Standard Institute, an industry resource on sustainable practices.

While celebrities often return clothing they borrow from designers, people are stuck with clothing made to withstand only a few gentle washes.

“We haven’t always shopped this way,” Bédat said. “It’s become a trend to have a super low-quality clothing that we don’t really want to wear because we get rid of it so fast.”

The accelerated cycle of buying and disposing clothes is already evident. The average consumer bought 60% more clothing in 2014 than in 2000 and kept the garment for half as long, according to the World Resources Institute.

But trendy clothes sold for cheap often end up being a false economy. When a low-quality product falls apart after a few years, consumers will end up buying more than they might’ve if they stuck to one higher-priced item, said Patsy Perry, senior lecturer in fashion marketing at the University of Manchester’s School of Materials.

“[Fashion] is so much of how we communicate our self-identity, our confidence,” she said. “But because the volume of production and the speed of disposal are increasing, we are seeing just how wasteful it is.”

Recycle, swap or slow down

Phoenix and Fonda alone probably can’t dent the global fashion industry’s carbon footprint. But their visibility can empower consumers to dig into their closets and find new inspiration in well-worn garments.

“It gives consumers validation,” she said. “They don’t have to go out and buy the latest style.”

Abstaining from buying new clothes may not be practical, James said, so consumers should be more mindful of what they’re buying and consider what they’ll wear, and, like Phoenix and Fonda, how many uses they’ll get out of it.

“Boycotting the fashion industry is not the answer,” she said. “What we need to do is slow our consumption down and make more informed and considered decisions.”

Both luxury and value brands are to blame for the high demand for products and the ensuing environmental impacts, but change could start at the top. High-end brands aren’t pressured to churn out products like fast-fashion houses are, so they could funnel some of their profits toward more responsible methods of production, James said.

Jane Fonda vowed the red coat she’s sported at all of her climate protest would be the last item of clothing she’d ever buy. She’s protested climate inaction in Washington since October. Credit: Mandel Ngan/AFP/Getty Images

Some brands already have: Patagonia and Eileen Fisher encourage customers to return used clothing to be made into new garments, a model Lewis called “product stewardship.”
Perry suggests fashion devotees get their fix with clothing rental services or shop resale — already a $24 billion market as of 2018.

In the UK, organized clothing swaps have taken off as a way to keep up with trends and extend a garment’s lifespan. Strangers and friends gather and exchange clothes, often only for the price of admission.

Perhaps most important in chipping away at fashion’s carbon output, James said, is getting loud.

“We’re seeing pockets of activity popping up everywhere,” she said. “People are starting to make different choices, in clothing, in transport — small behavioral changes — all reflecting that momentum.”

The fashion industry may not upend its model after a protest or two. But companies are willing to listen, Bédat said. In many of her conversations with brands, she said most leaders are receptive to customers’ concerns about the impact of their clothing and they’re willing to change.

“This is what makes fashion a really great space,” she said. “This is highly addressable, not a sacrifice.”