Home Trends Plan C by Carolina Castiglioni Is the New Label From the Family... 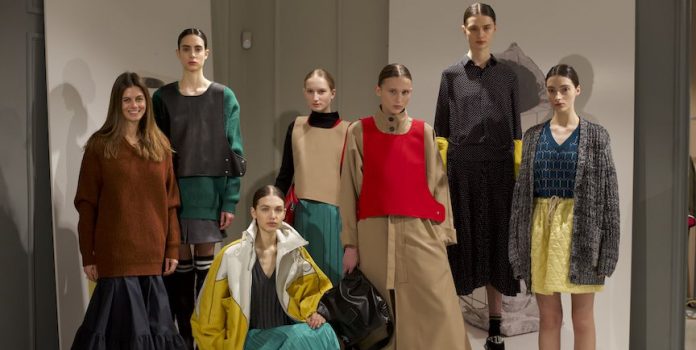 Carolina Castiglioni is bathed in grays and sage greens. These are the colors she has chosen for the atelier of her new label, Plan C, but they also happen to match her temperament and that of her parents, Consuelo and Gianni, who founded the beloved Italian brand Marni 25 years ago.

The Castiglionis never resorted to spectacle; their preternaturally cool garments spoke sotto voce to a woman who wasn’t “quirky” or “offbeat,” as critics often said, but confident in her individuality. It’s a brisk afternoon when we meet in Milan, and Castiglioni, pictured above with models wearing the Fall 2019 collection during Milan Fashion Week, is holding court inside the apartment where her great-grandmother opened a celebrated fur business in the early 1960s.

Castiglioni presented her first collection for the new label in September, two years after a disagreement with Marni’s corporate owners led the family to flee their brand (Marni now cruises along under new direction). And rather quickly, as if by dog whistle, she captured the attention of her mother’s former congregation. She presented her second collection just last week during Milan Fashion Week, and retailers are smitten: Barneys New York will carry the label exclusively in the U.S., and international orders have also followed from 10 Corso Como, Lane Crawford and Le Bon Marché.

“It was a pity to leave our knowledge behind,” Castiglioni tells T&C, describing the period after luxury magnate Renzo Rosso took full control of Marni in 2015. She thought that years of sartorial know-how, numerous retail connections, and a point of view that’s practically a birthright shouldn’t go to waste. “We wanted to return on our terms, with our own rules.”

And so they have. Though Castiglioni is insistent that her mother is not involved in the new venture (a proviso she emphasizes presumably for legal reasons), Plan C is informed by the ethos that made the original Marni a touchstone for generations of women who sought fashions as left of center as they were.

There are masculine silhouettes and men’s tailoring in the debut collection, but those items are cinched at the waist with a garment of Castiglioni’s invention and softened by bright colors. Outerwear and skirts may come in leather or macintosh, but those materials are sometimes paired with softer ones, like layers of organza in the case of one eye-catching slit skirt.

And while athleisure does make an obligatory cameo, all the sweaters carry twee doodles by Castiglioni’s five-year-old daughter, Margherita. Confident from the retail response to spring, the fall collection featured and expanded line-up and richer materials, including high-tech fabrics and Shetland wools, each look proudly oblivious of trends and seasons. Her children’s drawings still figured prominently in prints.

If these choices seem deliberate, it’s because they are a badge of honor for a family long accustomed to driving in its own lane. With a name that telegraphs signature self-awareness (“Carolina. Castiglioni. After plans A and B, then comes C,” the designer says playfully) and with just two collections a year—spring and fall—Plan C offers a break from the frenzied pace of high-end fashion today.

Castiglioni says she doesn’t have to rush—not anymore. “That’s the real luxury of a startup,” she says.

This story appears in the March 2019 issue of Town & Country. SUBSCRIBE NOW