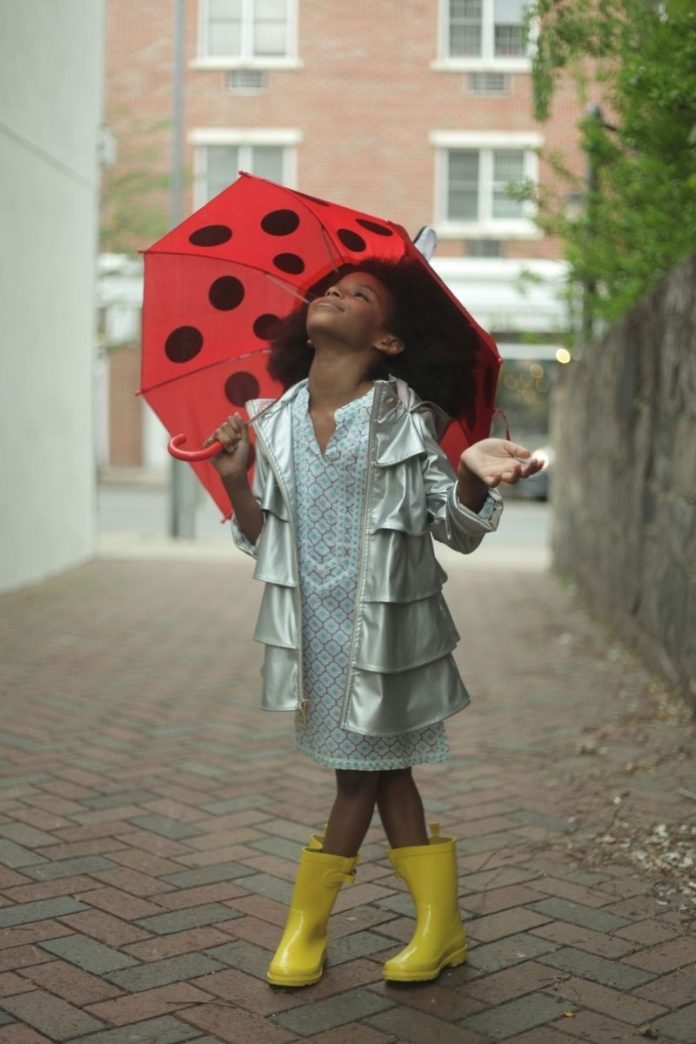 It’s almost time to swap your favorite bathing suit and beach towel for new school outfits and accessories. Some parents will take their kids’ “back-to-school” photos this year on Sept. 5 when the kids hold up chalkboards that say what grade they’re in now. For students, it’s the opportunity to make a statement through their ensembles and start the new year off feeling good.

Liz Teich is a fashion blogger and wardrobe stylist who’s brought photo shoot concepts to life for major brands’ fashion campaigns over the last decade. She also lives in Cobble Hill with her husband and two-year-old. Teich spoke with us to discuss the latest kids’ fashion trends, neighborhood stores to get stylish threads and that time she dressed the cast of Netflix’s hit series “Stranger Things.”

RHSR: Are there any types of clothing or designs that are most popular this season [for kids]?

LT: The biggest thing I’m seeing in kids’ fashion that’s trickling down from adult fashion is tie-dye. I think that’s going to be a huge back-to-school trend that you’re going to see on everything from shirts to backpacks. Another big trend we’re seeing for a while now – and is definitely going to carry over into the fall – are the two-way sequins … [that are] gender neutral for both girls and boys. A lot of times I see them on a graphic on t-shirts, but I’m also seeing them on boys’ fashion, which is a new thing. Two-way sequins have kind of become the new fidget spinner for kids because they’re constantly playing with them.

RHSR: Any timeless fashion or styling tips for parents [when building up their kids’ wardrobes]?

LT: Something I use a lot on shoots and my own son is a denim jacket – you can’t go wrong with [it]. I think it’s a great piece to have in a kid’s wardrobe because you can layer it and wear it underneath a coat or wear it on its own. You can also make it yours and make it funky. I have, for my son, a cool ZARA jacket with a dinosaur patch on it, and so it becomes his own cool piece. I was also on a back-to-school shoot and the hero of the shoot was this denim jacket we found, but I made it even cooler by finding patches and putting them on the back. We ended up shooting it from the back and it made the shot.

RHSR: You mentioned ZARA earlier. Are they any other go-to places to shop for your child or when you’re thinking of a shoot when you’re given creative liberties?

LT: For me personally, ZARA is great and affordable and you can get really cool fashion that you kind of want to wear yourself – even my husband is envious of a lot of my son’s wardrobe. Target’s Art Class is one of my favorites because they have a little 90s twist and it’s all very funky and cool. I love to get unique pieces that you can’t get anywhere else, and I’m into sustainable fashion, so one of my favorite stores to shop at for my son is Poshmark, where you can shop other people’s pre-owned clothing [via app]. In the neighborhood, Runnin’ Wild Kids Shoes (276 Court St.) is a great source for shoes. They have all the cool shoes that everybody wants like Native Jefferson. You have to go early in the season and get them before it gets picked clean and runs out of sizes. We go to Pizzazzz [on Court Street] for everything, and Sprout San Francisco (376 Court St.) is another good one. [Online brand] Maisonette is a great source for high-end, back-to-school fashion.

RHSR: Have you had any favorite kids’ shoots or campaigns?

LT: The “Stranger Things” [shoot] that I worked on [as a stock photo promo for Netflix in 2016] was really fun. I got to meet all the kids before the show actually came out, and it was really cool because I was learning about their personalities and about who each of them was. To style all these kids, without knowing who they were, was really interesting. The art director said the most important thing was to keep them looking like kids and to not dress them too sophisticated. I dressed them a little sophisticated but with the funky Doc Martens that feel a little bit younger – it was important to have that balance of keeping them look young and also stylish. They did tell me beforehand that Millie Bobby Brown [who plays Eleven] was really into fashion and that the other kids really didn’t know much about fashion or what they wanted to dress like. They were just so excited to wear something that wasn’t 80s clothing because that’s what the show was all about. I let them have a little bit more say in what they wanted to wear because I wanted them to feel good in what they were in. I had a pair of pink-sequined combat boots and Millie right away was like ‘I need to wear these; they are amazing.’ I had one of the kids in skinny jeans and Gaten Matarazzo [who plays Dustin Henderson] said, ‘I don’t wear skinny jeans.’ [The actors] were so nice and just wanted to have fun.

*Note: This interview’s been condensed and edited for publication.