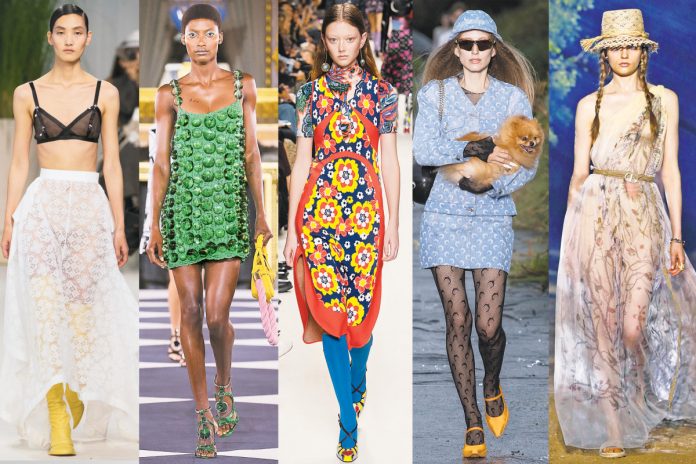 Paris Fashion Week is a glamorous grind, but its offerings are otherworldly. Telfar Clemens (who typically shows in NYC) brought his scene-stealing spectacle to kick off the week. Naomi Campbell closed Saint Laurent’s light show at the Eiffel Tower wearing a sequin suit. Rick Owens boasted bubble blowers, while pleated dresses suspended in the air cascaded down and slipped onto models at Issey Miyake. Balenciaga served up larger-than-life ballgowns that bounced down the runway. And Louis Vuitton closed the week with a front row that included Justin Timberlake and Jessica Biel. Ah, the magic of Paris.

Clothes were slished and slashed every which asymmetric way. Dior and Valentino both showed one-shouldered stunners, adorned with flowers and feathers, while Alexander McQueen whipped up zigzagged hemlines with piled-on layers. Heavenly.

Runways felt more pared down than ever, but not without thought behind the threads: Off-White’s high-slit shirtdress tapped into fashion’s obsession with ’90s minimalism, while Miu Miu’s white dress — styled easily with a cardigan — struck the perfect balance between retro and sexy. At Loewe, essentials were stripped down to a sheer bra and flowing skirt. Simply stunning.

It takes a lot to excite the normally jaded fashion crowd, especially on the last leg of fashion month. But Belgian designer Dries Van Noten (known for his immensely wearable pieces) pulled off just such a feat by unveiling a top-secret collaboration with over-the-top French designer Christian Lacroix. Just for fun! (Fun! Who would’ve thought?!) The looks were hybrids of the two iconic aesthetics: bright bows and ruffles blended seamlessly with slouchy sweatshirts, practical bottoms and embellished outerwear. A hearty reminder that fashion — at its core — is meant to delight.

Florals are a spring evergreen, especially on Giambattista Valli’s runways. This time, he piled flowers not only on his signature frothy frocks, but also on models. Their faces were framed with freshly cut orchids, while others wore pastel feather crowns, tiara-style (left). Garden party at its finest.