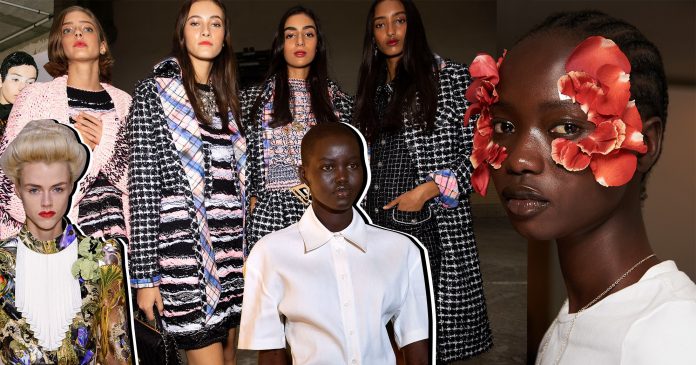 Per tradition, Paris Fashion Week was all things to beauty dreamers. For the Francophiles, there were looks that captured that elusive insouciance—the Gallic flicks of liner at Dior, the undone ’70s waves at Celine—but also ones that paid homage to the past: Thom Browne’s chandelier-bound Marie Antoinette poufs, for example, transported showgoers back to the 18th century. With a flair for the dramatics as a through line, fantastical flourishes were omnipresent: At Giambattista Valli, supercharged complexions were adorned with fresh-from-the-garden florals, while at Dries Van Noten, the Belgian designer paid homage to his co-collaborator Christian Lacroix with ostrich plume-topped updos. And then there were the dizzying, super-Surrealist cascades of eye crystals at Schiaparelli, which helped close out the nine-day marathon with a veritable bang. But of all the mic-drop moments, none was more jaw-dropping—or thought-provoking—than the glass-sharp prosthetic cheekbones and inflated lips at Balenciaga. Here, five standout takeaways from the week.

At Dior, makeup artist Peter Philips embraced a more minimal mindset than he has in seasons past. “This is a toned-down version of a French woman’s classic eyeliner,” said Philips of the smooth, slender slashes of pigment along the upper lash line, which didn’t extend all the way to the inner corner for a more pared-back effect. “Less is more” was also the overarching mood for the hair at Celine, Chanel, and Saint Laurent, where each of the French fashion houses channeled the late ’60s and early ’70s with clean center parts and tousled, languid lengths.

A Wet, Glass-Like Lip Wins Out

Translucent shine is the new go-with-everything neutral. For proof, look no further than the dewy, crystal-clear lips that came down the runway at Mugler, Off-White, and Giambattista Valli. But if it’s a dose of juicy color you crave, one fell swoop of Pat McGrath’s saturated Lust: Gloss will do the trick, as evidenced by the bright pink pouts at Louis Vuitton. Or, you can make like Chanel’s global creative makeup and color designer Lucia Pica, who painted lips coral pink, blending out the outer edges for a diffused effect, and added a vinyl-like top layer. “It almost looks as if the girls have been eating a strawberry,” Pica said backstage.

Updos Get a Historical Twist

“It’s historical punk,” Sam McKnight explained of the 18th-century-inspired rolls that topped the modern, ribbon-tied ponytails at Vivienne Westwood. Also harkening back to the time period was pro Eugene Souleiman, who reimagined Marie Antoinette’s famous powdered pouf with a fishtail braid detail. But for Guido Palau, it was the ’40s that he had on the brain. At Chloé, he put a boyish spin on a polished updo, and at Miu Miu, he created a soft curled texture and did old-school tissue sets to create a voluminous high-low silhouette. Finally, at Louis Vuitton, a Gibson Girl knot looked much more modern cast in model Kristen Paige’s white-hot platinum lengths.